Amena and the Refugee Cat

Today, I woke up in Macedonia and drove two hours across the Greek border. I went through the normal checkpoint and had my passport stamped. Once across, we began driving parallel to the border until we came upon a group of a couple hundred refugees. 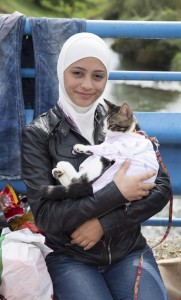 The group had just disembarked from a train and walked a kilometre or two to where we met them. They were walking along the train tracks until they came to a place to cross. Once they crossed over, they were in Macedonia. There was no one to stamp passports, but the refugees were guided along the way.

Although the news has mostly focused on Syrian refugees escaping a civil war that started in 2011, I found that there were also several refugees from Afghanistan, Iraq, and a couple of African countries. People are leaving their homes for many reasons, but it’s not to “take advantage” of the hospitality of these Eastern European countries. Each person I spoke with had a heart-breaking story of why they had journeyed so far from their homes.

Each person touched me in a different way, but as I sit in my room back in Macedonia, one refugee stands out from the rest in my mind. Amena* was a teenage girl with a sweet smile. As she sat on an embankment for a moment at one of the stops, she unzipped an orange bag, and I heard a meow. After a couple of minutes of coercing, she was able to pull him from it.

I was excited, probably because I miss my cat; so I sat beside Amena to pet her friend. As I did, I asked her a few questions. Her English was broken but still better than my Arabic. She told me, with the help of those around her, that she and her family—her parents, brother, and sisters—had journeyed from Syria. 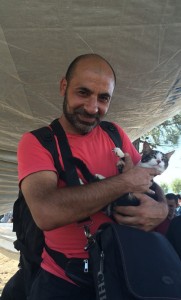 Amena’s father gives the family cat a scratch under the chin.

Along the way, they found this cat in Turkey. It was only a day old, and its mother had just died. She took compassion on it and brought it along with her.

As she spoke to me, her father walked up and picked up the cat. He cuddled it. Something about seeing a grown man do that—while he’s carrying all of his belongings and his family across the Middle East and Europe—made my heart happy.

In America, some of the news from Eastern Europe is filled with rioting and fear. I didn’t see that today. I saw a man and his daughter caring for an animal that could not care for itself. I saw her carrying an extra bag, across three countries so far, that she didn’t have to carry. I saw two people who, despite losing everything themselves, still had compassion for another of God’s creatures.

Amena and her father were two of thousands who crossed the border into Macedonia today. Each person has a unique story to tell. Most people left behind everything in search of a better life, and yet I saw tiny acts of compassion like Amena’s everywhere today. Please pray that she and her family are able to settle in Europe, and pray for safety in their journey. 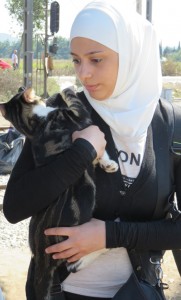 Syrian refugee Amena and her cat have made a long journey through Eastern Europe.

On Sunday, I ran into her again—this time at the Croatia-Slovenia border. Since the last time I had seen her, she and her family had crossed through all of Macedonia, Serbia, and Croatia. She and Jacques, the cat, were sitting on the bridge to Slovenia, quietly waiting for the police to move the barricade.

Amena had made a friend who spoke English fluently and was able to translate for me, so that this time we could have an actual conversation. She asked me how old I am, whether I’m married, and if I have kids. I asked her how her journey was going, where she was sleeping, and whether she needed anything.

Although she politely declined any aid, I made sure she received one of the food parcels that Samaritan’s Purse was distributing. Many of the refugees come from middle- or upper-class backgrounds in their home countries. Now that they don’t have necessities, they often don’t know how to ask for the things they need.

Amena told me that she’s hoping to travel to Germany with her family. Her friend is hoping to go to Switzerland. I had to leave soon after we distributed the food parcels, so I don’t know whether they even made it past the border. When I left, people were cheering for the police to remove the barricade. She and her friend were still sitting quietly; they said cheering wouldn’t help them anyway.

I gave Amena my card, and, although she doesn’t speak English, I asked her to write to me when she gets to her destination. Her family has already been traveling a couple of weeks, and they have no idea when they’ll finally get to Western Europe.
Still, I was encouraged to see that they had all made it to Slovenia in good health. (Jacques was healthy too and was likely the happiest of all as he lay purring between Amena and her friend.) Their spirits were still up, and failure didn’t even seem like an option. As I left, Amena sat in quiet resilience with a slight smile, and her father laughed beside her.

Amena’s family and her cat have humanised the refugee crisis for me. I was elated to see how far they had made it. People don’t leave their homes and everything they know unless they’re in a desperate situation.

Tonight, as I sleep in a hotel next to the coast where refugees are landing, I pray that Amena’s family finds safety, along with the thousands of other refugees traveling with them. 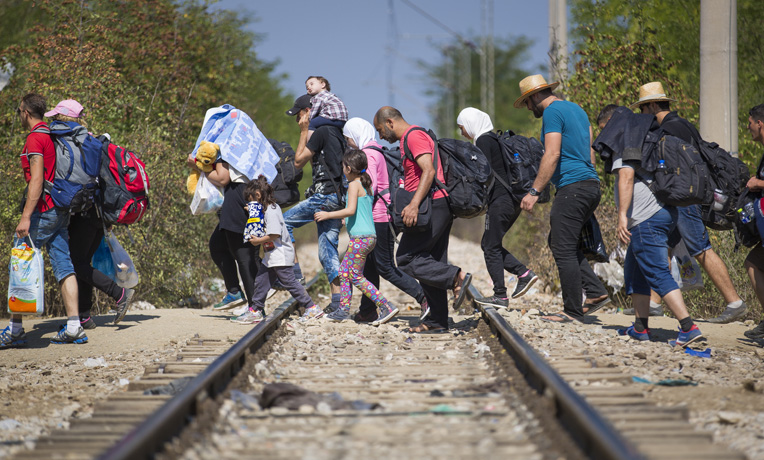