Samaritan’s Purse teams are busy distributing emergency relief items in the aftermath of storms and flooding in the Philippines, Vietnam, and Cambodia.

A series of deadly tropical storms in rapid succession has caused catastrophic damage and the worst flooding that parts of Southeast Asia have endured in more than four decades.

Floodwaters, fallen trees, and debris have left entire villages inaccessible. Hundreds of thousands of homes across the region are damaged or destroyed. Decimated crops have left farmers without any income source.

Samaritan’s Purse is working in the Philippines, Vietnam, and Cambodia to provide critical relief supplies in the wake of this historic flooding season.

Five storms hit the Philippines in about three weeks, with the northern end of the country bearing the brunt of the devastation. 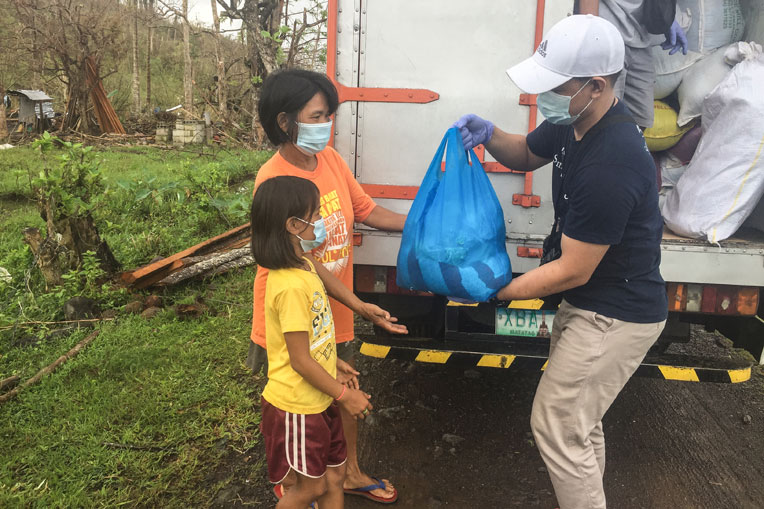 A family in the Philippines receives relief items from our staff.

“Our staff response team had just completed Super Typhoon Goni damage assessments on Catanduanes Island, and were getting ready to begin relief distributions, when they were forced to hunker down in a hotel for safety due to the onslaught of Typhoon Vamco,” explained Patrick Gitonga, Samaritans Purse country director in the Philippines.

Vamco hit many of the same communities that had already endured a lashing from Goni only 10 days before. More than 1.5 million people in central Luzon—the country’s main and most populous island, were hit by both of these powerful typhoons.

And while the nation’s capital of Manila was largely spared during Goni, it took a direct hit during Vamco. 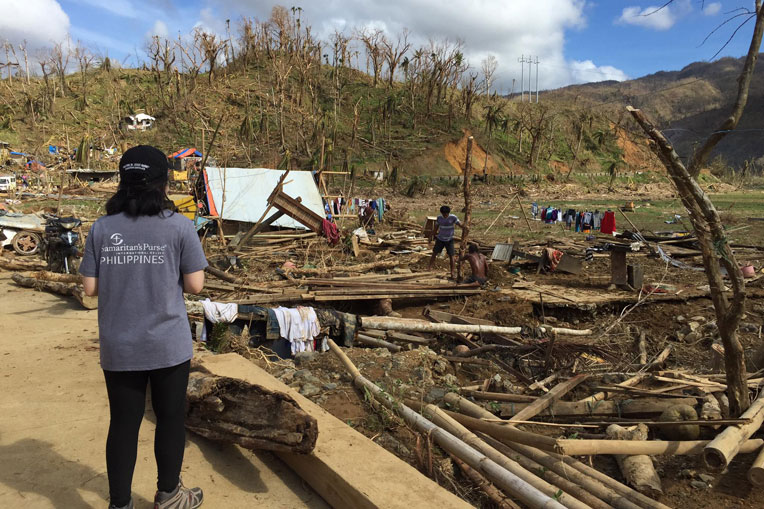 Thousands of homes were destroyed in the Philippines.

Samaritan’s Purse is providing clean water kits, hygiene items, and shelter material. We are also distributing emergency food packages that can sustain a family of five for at least 10 days.

“We are so dependent on outside help right now,” said one beneficiary. “We lost all our crops and it takes a year to cultivate abaca [a species of banana].”

It is estimated that nearly 670,000 acres of farmland were destroyed during the recent storms.

“This is a complex humanitarian crisis, as the pre-existing COVID-19 pandemic has depleted local and national government coffers, and COVID-19 imposed movement restrictions have made it difficult for first responders from unaffected regions to gain access to affected communities,” Gitonga said. 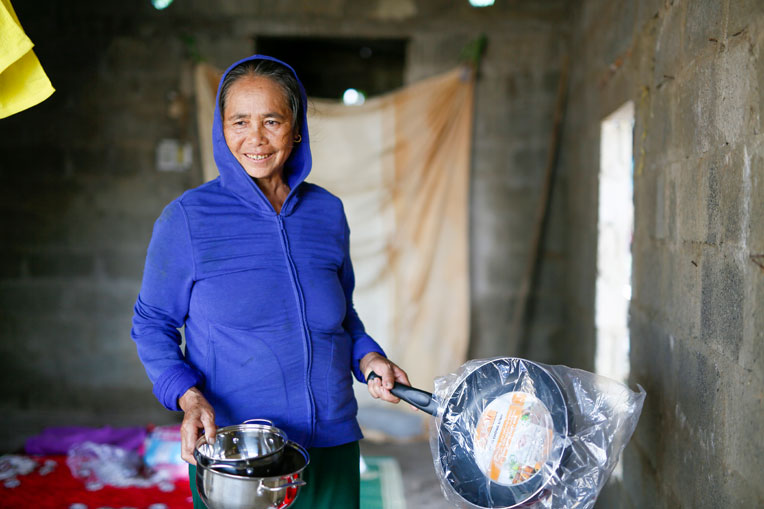 Widow Dau is grateful for these essential kitchen items.

The country was still reeling from widespread flooding and landslides when Typhoon Molave made landfall south of the coastal city of Da Nang in central Vietnam.

Then, after moving away from the Philippines, Typhoon Vamco set its sights on Vietnam, forcing more than 650,000 people to evacuate.

Beneficiaries such as Hop were grateful to meet our teams and receive the relief items. 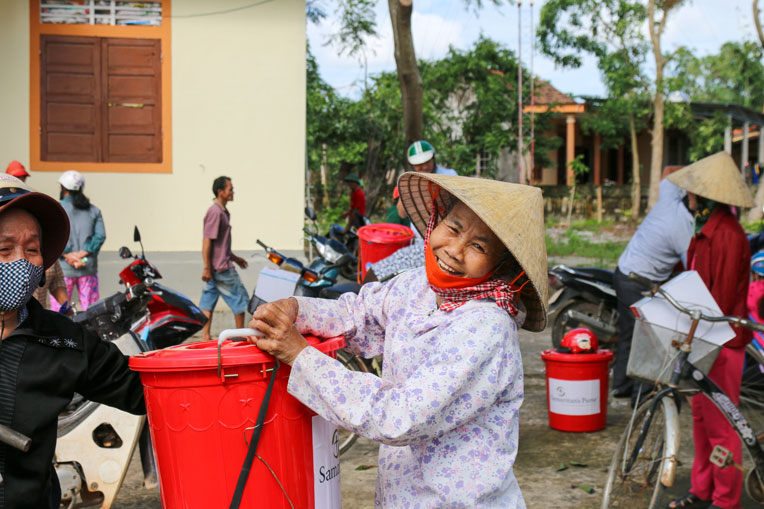 Vietnamese families are thankful for the help they’ve been given.

“The storm came and swept away all our belongings,” he said. “We don’t have anything left in the house.”

Dau is a widow and her children live far away. She is staying with a neighbor after the typhoon destroyed her home.

“Thank you for these items,” she said. “I have pots to cook with tonight.”

Another beneficiary told our staff that she was “overjoyed” as she opened the emergency relief kit. “The flood took away everything we had. Anything we receive now is a joy,” Vang said. “Our old mosquito net was torn by the flood water. Now we also have a blanket to use.”

Thousands of people in western Cambodia are still displaced after weeks of heavy rain and a hit from Tropical Storm Nangka. Immediately after the storm, our teams began distributing supplies such as food and water.

Now, we are also providing non-food items such as blankets and hygiene kits.

“We have watched the economic fallout of COVID-19 hit already fragile communities and vulnerable families in significant ways. So, when the floods hit, these already affected communities suffered the compounding effects of having lost their remaining livelihoods assets, food stocks, and, for some, homes,” said program manager Anna Zatsepina. “It was very hard to watch the layers of disaster and injustice.”

Yet, Anna and the team continue to trust God during the response and they are seeing Him work.

“We know that in the midst of darkness, God’s light shines greater and brighter. We have seen that throughout our response, faces light up with hope and hearts melt with gratitude. Jesus has brought His healing, life, and joy into broken hearts, both physically and spiritually. It has been an honor to serve the people of Cambodia in this hour of need.”

Please continue to pray for hurting people and for our relief work in these three countries recently hit by so many storms. 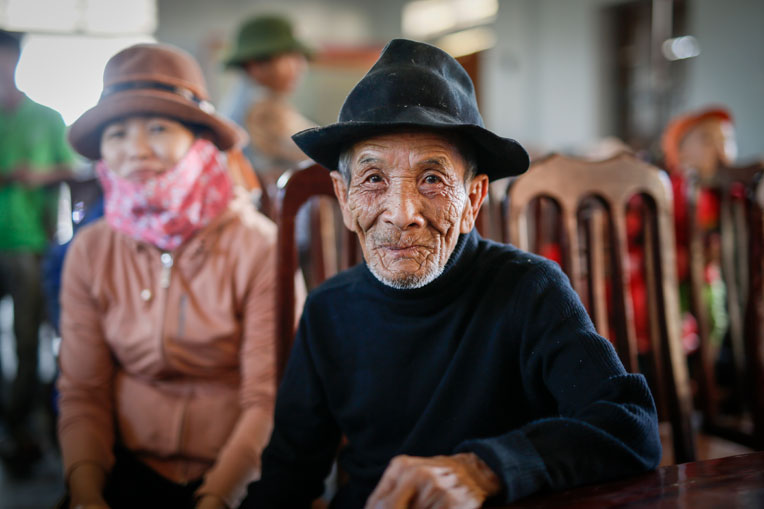 A beneficiary in Vietnam waits to receive his emergency supplies. Please pray for families suffering in the wake of these natural disasters.