Beauty in a Refugee Camp in Greece

There are more than 62,000 refugees living in Greece, many of whom are still living in tents even now that winter has come. Samaritan’s Purse is at work in northern Greece, Athens, and five Greek islands. Our staff members’ presence and influence extends far and wide to refugees living in official sites, in alternative refugee housing, and in areas in even the most remote parts of Greece.

From August to December — the scorching heat to the bitter cold — I have been in Greece serving refugees with Samaritan’s Purse in what has been called ‘the humanitarian crisis of our century.’ 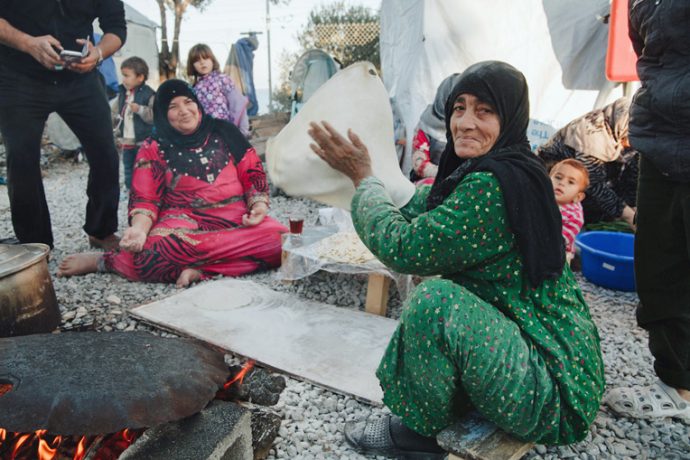 I have been humbled along my journey to meet and talk with many refugees who, though left with nothing, have consistently welcomed me into their homes and willingly given me their time and food even when I couldn’t offer anything in return.

Each space I visited was similar—small, overcrowded, basic, and often cold. The accommodations varied from tents, refugee housing units, and rooms in old abandoned buildings— classrooms, hotels, airports, and even old Olympic venues. Some were by the sea, others in the mountains; some were in more prominent towns and cities, others in the remote areas of the Peloponnese.

But there was something warming and inviting about each space I was invited into. It was so subtle that it took me a while to notice the theme that wove through each space, penetrating time, situation, and culture. The thread was hospitality, and it was a sense of home.

Refugees have creatively made their surroundings more familiar and homier. Spaces represent their personalities and culture and are full of subtle reminders and memories of the homes they have left behind. I have seen creativity and ingenuity manifesting everywhere. Many use discarded scraps to make household items.

I have seen so many makeshift cooking stoves!

During my time spent in camps, there have been individuals that have impacted me and left a lasting impression. These are always people who continue to hold on to hope; who look around; and who, though in an environment they were never prepared for, decide every day to do something positive and in every moment to grow, to learn, and to improve their lives.

These are enduring people who have refused to give up or allow their circumstances to overwhelm or destroy them. They are brave because they continue to smile and choose to show kindness every day.

There was one such man in Schisto Camp. He had a tent like every other family—a one room, tiny space that accommodated the five members of his family.

I stopped suddenly on my walk around the camp to stand and admire his porch. It was excellently crafted out of wood and gravel from scraps and spare materials. It provided an area for shoes to be taken off in order to keep the inside of the tent clean. But it was clear it was not solely for functionality but also for the pleasure and delight of this man and his family.

This is where we first met and began to talk.

He was well-known among our staff, and often in the mornings, they would stop at the bench close to his tent and grab a cup of tea together. This man at Schisto Camp always served with a thankful and sincere heart and a warm smile.

He invited me inside his home where he showed me the beautiful wooden frame and door he had created out of plastic sheeting, which both insulated and allowed light into the tent. There was even furniture inside including a makeshift seating area fixed out of wood and blankets that, when unfolded, could be turned into a bed in the evening.

The man in Shisto Camp had taken something basic, in a situation he and his family shared with many others around them, and turned it into something beautiful, something useful, and something distinctly his own. In this way, he took hold of his environment and made it home.

I was so inspired and noticed more and more the creativity innovation in the spaces that refugees were living in.

It has been such a powerful thing to witness people totally stripped of everything continue the fight to not be overcome by their circumstances—taking control and ownership of their lives and the spaces they find themselves in and affecting and changing the things that they can.

In the surroundings of the man in Shisto Camp and his family, there is chaos—nothing is certain. Forced to flee from his beloved country, he left everything behind but the clothes on his back and his family. He lives in a temporary camp in a small space with his family, and he waits, like many others, for news about his future.

But through this chaos and unknown, the peace and stillness of his spirit shine through. The tranquil space he has created around him in the chaos shows the stability and calmness he has within him.

I was challenged about the circumstances on which my happiness and contentment might rely and the importance that more than anything we must continue each day with thanksgiving.

I was reminded of God’s peace that surpasses all understanding—the true joy that is found only in Him and is not reliant on the external, of the truth that we hold on to deep within us, and of the strength that He alone provides.

It’s God’s creativity instilled within us that allows us to flourish even in restricted circumstances. And every day, each of us has a choice to create something beautiful out of what we have and to be thankful.