Critical Training Helps Save the Lives of Babies in Myanmar

A health worker applies what she learned from a Samaritan’s Purse course on neonatal resuscitation.

One afternoon Naw Mu, a local health worker, made her way to a remote village in southeast Myanmar to assist a mother giving birth. By the time Naw Mu arrived, the birth attendant had already helped deliver the baby—but he was not breathing. 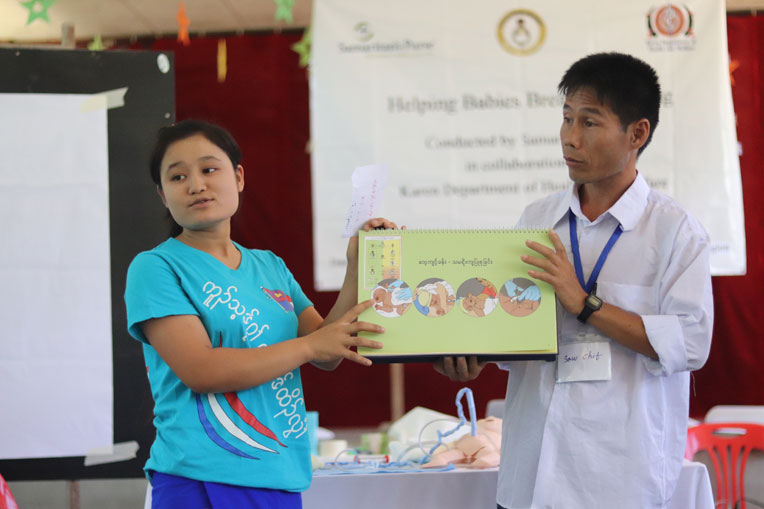 Resuscitation training is crucial, as only about half of babies delivered in the country’s rural communities are delivered by a skilled provider.

Although everyone thought the baby would die, Naw Mu was determined to help the baby survive.

So, she began using the newborn resuscitation techniques she learned during a Helping Babies Breathe training led by Samaritan’s Purse. The intervention was successful, and the boy began breathing on his own.

“This was the first time I was able to help a baby breathe and save a life because of the proper techniques and skills I learned from the training,” Naw Mu said.

The Helping Babies Breathe training is crucial, as only about half of babies delivered in Myanmar’s rural communities are delivered by a skilled provider. The infant mortality rate in the area where our teams are working is more than double the national average. Mothers are also at risk—nearly 3,000 women in Myanmar die annually from preventable causes related to pregnancy, childbirth, and postnatal care.

A few months later, Naw Mu arrived to another home delivery where labour complications compelled her to transport the mother to the nearest hospital several hours away. The baby was born in the vehicle—and was not breathing. 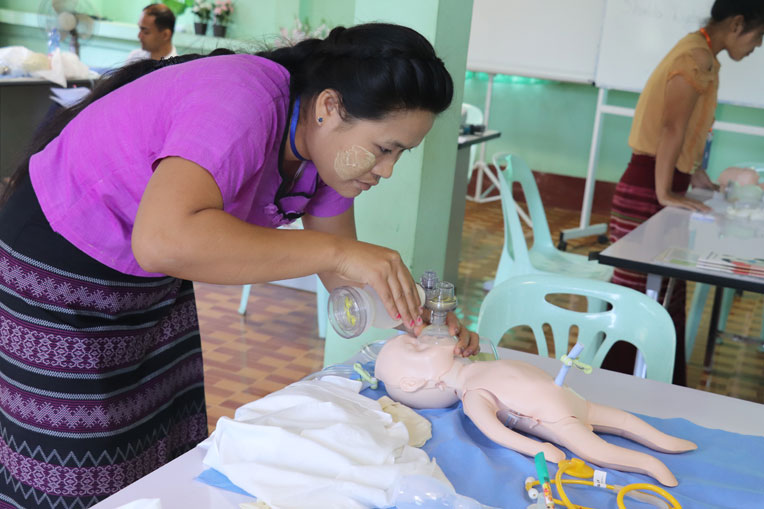 The infant mortality rate in the area where our teams work is more than double the national average.

Naw Mu helped clear the child’s airway, and, after several minutes, the baby started breathing. “The family members and I were so happy when the baby started crying. I don’t even know how to explain that feeling,” she said.

Naw Mu is one of 169 local health workers Samaritan’s Purse has equipped with Helping Babies Breathe training, which is saving the lives of newborns in remote areas of Myanmar. The simple resuscitation techniques, which are widely used in countries throughout the world, have been shown to significantly reduce neonatal mortality.

In addition to technical skills learned during Helping Babies Breathe, Samaritan’s Purse has empowered more than 90 health workers with the skills they need to reproduce the training with others.

Naw Mu is already sharing the lifesaving techniques she learned with other health workers and traditional birth attendants so they can be more effective at caring for mothers and babies in their communities.

Samaritan’s Purse is also working to improve the overall health of women and children in other areas of Myanmar through programs such as nutrition training and mother-to-mother support groups.

Please pray for our teams as they demonstrate God’s love to health workers, mothers, and families. Pray that many people in Myanmar will come to know His love for them.