Freddy Leones and his wife, Monica, live in Pedernales, a city in Ecuador devastated by the earthquake. After the disaster, Freddy, a government employee, was distributing food and water to the earthquake victims. On Friday, when Freddy came home from work, he found that his wife had become sick. With tears in his own eyes, he recounted that she was “crying out like a child.”

Freddy knew that she needed to see a doctor, so they called an ambulance and were taken to the Samaritan’s Purse emergency field hospital in Chone—a two-hour drive made even more challenging by collapsed bridges and fallen power lines. 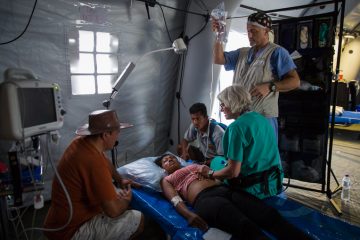 Monica receives an exam at the emergency field hospital

“We came here because everything else was destroyed,” he said.

After the doctors evaluated Monica, they determined that she needed to have her appendix removed. This would be the first surgery at the emergency field hospital.

“I am very nervous,” Freddy said before the surgery. “I do not know what will happen to her.” 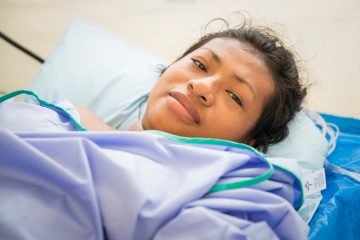 Dr. Brianna Wilson, who helped diagnose Monica in the emergency room, said it has been amazing to work at a fully equipped hospital immediately following an international disaster.

“I’ve been in many different countries and places with Samaritan’s Purse, but we’ve never had this full capacity with an operating room, emergency room, and pharmacy,” she said. “It’s a really neat opportunity to help the Ecuadorian people when their own hospitals can’t keep up.”

Freddy thanked Samaritan’s Purse again and again for saving his wife. He said that the doctors and nurses haven’t taken a break since they started caring for Monica.

“Please keep helping us,” Freddy said. “We need your help.”

Aftershocks Continue to Cause Injury

Ecuador is still experiencing aftershocks. On April 21, five days after the first earthquake, a 6.0 aftershock caused Lider to fall off of a second story balcony. 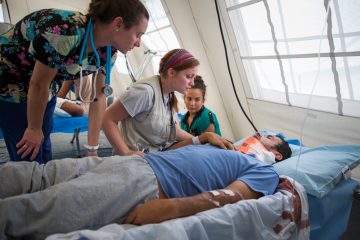 Lider receives an examination with his niece, Maria, by his bedside.

This fall left Lider with very serious injuries. Doctors at the emergency field hospital continue to evaluate him and track his progress as he lies in the hospital ward wearing a neck brace. He is awaiting X-rays to further determine the extent of his internal injuries.

“I felt really happy because the moment my uncle got here, he was attended to very well,” said Lider’s niece, Maria.

The people of Ecuador have experienced tremendous loss and devastation from the first earthquake and continuing aftershocks. Many of their local hospitals and clinics were destroyed in the earthquake, and their healthcare system is unable to manage the increased volume of patients.

Please pray for Ecuador in this trying time and for Samaritan’s Purse as we continue to work to meet their immediate needs.