Franklin Graham officially dedicated the Samaritan’s Purse emergency field hospital in Iraq this week. The 50-bed trauma unit is located on the Plains of Nineveh and is designed to treat those injured in the battle between Iraqi and coalition forces and ISIS militants in Mosul. An estimated 3,000 people per day are now fleeing the city—a number of whom have sustained life-threatening injuries from the conflict. 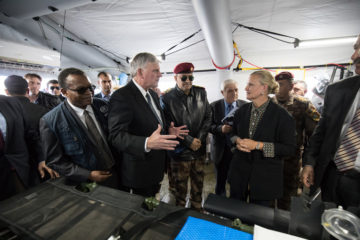 Iraqi government officials and representatives from the United Nations joined Graham for the ceremony.

Lise Grande, U.N. Humanitarian Coordinator for Iraq, said that it has been difficult to find organisations willing to provide front-line trauma care.

‘We’ve reached out to a number of organisations, asking, begging them to step forward,’ she said. ‘Dr. Graham, Samaritan’s Purse answered that call. We can’t thank you enough.

‘You built this hospital in record time. Most of all we want to thank you for saving people. Because Samaritan’s Purse is here, thousands—tens of thousands—of people will survive…’

‘Because Samaritan’s Purse is here, thousands – tens of thousands – of people will survive.’
—Lise Grande, U.N. Humanitarian Coordinator for Iraq

The hospital meets a critical need as trauma patients previously had to be transported for treatment in Erbil, a one to two hour drive away.

Donate to our work in Northern Iraq ‘In trauma there is what we call the “golden hour” when you can save a patient’s life,’ said one of our hospital nurses. ‘If we can get them treatment within that golden hour, then there is a huge percentage hope that we can save their lives and their limbs.’ 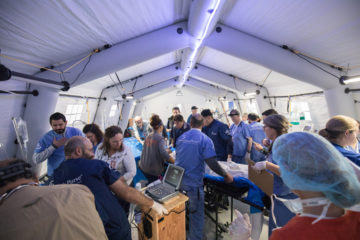 OUR MEDICAL TEAM IN IRAQ IS BUSY TREATING PATIENTS WITH SEVERE INJURIES AT OUR FIELD HOSPITAL.

Field Hospital Director Dr. David Gettle, who has served with Samaritan’s Purse disaster response teams for 17 years, noted that God is giving patients like these a chance to survive because of the hospital’s proximity to the fighting.

‘We are not only here to save their lives but they will see a difference in the personnel and how they are cared for,’ Dr. Gettle said. ‘We will plant the seeds in the Nineveh Plains, and God will cultivate them.’

Graham commended our medical team for the expert care they are providing to severely injured patients in the state-of-the-art facility even as they are ministering to them as well: ‘[They] pray for them, talk to them, hold their hands, and smile. For most of these people, it might be the only glimpse of Jesus Christ they will ever see, and I want them to leave here with that impression.’ 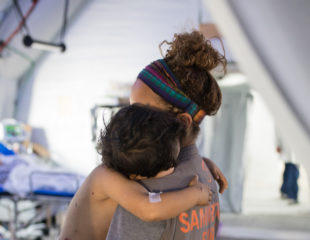 MANY OF OUR PATIENTS HAVE BEEN CHILDREN.

The emergency field hospital is just one of the ways Samaritan’s Purse is addressing the physical and spiritual needs of the more than 130,000 Iraqis displaced from Mosul since the nation’s security forces and others began an offensive to retake the city from ISIS control in October 2016. In partnership with the World Food Programme, we have distributed more than 1,800 metric tons of food to evacuees in camps as well as in surrounding villages now free from ISIS control. We are also distributing non-food items ranging from cook stoves and hygiene kits to blankets and sheets of tarpaulin to help the displaced survive the winter temperatures.

Please pray for the emergency field hospital patients and their families, asking God to preserve lives and help them recover. Pray also for Him to sustain those serving them in Jesus’ Name.

Read more about the children affected by conflict in Mosul