The anticipation was almost unbearable. All the medical personnel gathered around the white, plastic table in the Ebola isolation centre that had the white board with the status of all the patients. We had just received a text message that announced the results of the blood samples of various patients sent to the lab the previous day were available.

I was eagerly waiting for the results for Emmanuel, a 15-year-old boy (who looked more like 10 to me) who was admitted with the virus a few days ago. I held my breath as each patient’s name was read along with his or her result. 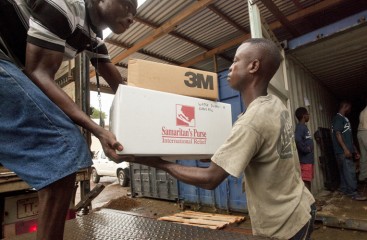 I met Emmanuel when I first went into the isolation unit a few days earlier. He caught my attention because he was so attentive to Fayiah, a 4-year-old child with Ebola. Little Fayiah was in the isolation unit by himself. His was a unique situation. Although his mother did not test positive for the virus, he did.

To be near her son, she asked if she could work as a hygienist at the centre. Being a hygienist is not a coveted job. In fact, it’s one of the more dangerous jobs because the worker is exposed to the virus each and every day, multiple times, as she takes everything that is contaminated and decontaminates it with a chlorine solution.

I could see how a mother would do just about anything to be near her child – even take a risky job such as this. Notwithstanding, Fayiah was in the isolation unit by himself while his mother did various duties on the periphery. At best, all she could hope was to see him from across the barrier fence that separated them.

It was heartbreaking to see Fayiah standing at the barrier fence looking out to where he last saw his mother, crying plaintively and inconsolably. I would see Emmanuel offer him rice to no avail. Fayiah was afraid, alone, and just wanted his mother. His needs were simple. I had to fight every instinct in me to go pick him up, hold him, console him, and tell him everything would be all right, although I knew it probably wouldn’t be.

Emmanuel‘s fever, on the other hand, had broken – a good sign, as the fever from Ebola persists. He was in good spirits and seemed to feel good. Yet he was only well if his blood results said he was well. I had engaged him in conversation on several visits, albeit from behind a protective suit each time. Emmanuel never said much, but he always responded with a big, boyish grin. While most 15 year olds I know are distracted with sports, cars, or girls, Emmanuel had a vastly different life, fighting for his survival while caring for a lonely little boy who missed his mother. 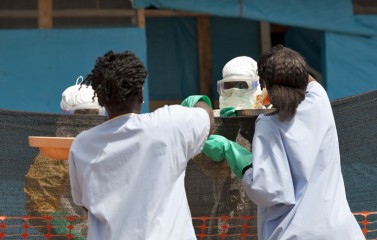 That evening at the white, plastic table with medical staff crowded around it, we heard the results one by one: Tamba – negative, Hawa – negative, Falla – negative, Emmanuel – NEGATIVE! My heart leaped at the news! I wanted to run in there, wake him from this nightmare, and tell him he could go home. While this impulse was unrealistic because of the contamination containment protocols (we had to suit up to tell him, discard and replace his clothes, etc…), it was news worth shouting.

In the end he had to spend one more night, but in the morning we had a new set of clothes for him. All the people who had cared for him from behind space suits greeted him with hugs and handshakes.

There was a rare moment of jubilation at the centre that evening because good news like this is rare: four negative results in one day. Four people who were formerly at death’s door are now able to taste freedom again – freedom from the dreaded disease and the freedom to once again live normal lives. I was happy, in particular, for one teenage boy in Liberia.

“Blessed be the God and Father of our Lord Jesus Christ, the Father of mercies and God of all comfort, who comforts us in all our tribulation, that we may be able to comfort those who are in any trouble, with the comfort with which we ourselves are comforted by God.” (2 Corinthians 1:3-4, NKJV).