SAMARITAN’S PURSE IS HELPING TO REBUILD PUERTO RICO AND OTHER PARTS OF THE CARIBBEAN AFTER THE TRAGIC 2017 HURRICANE SEASON.

As Hurricane Maria roared ashore at 6:15 am on September 20th 2017, pummeling the municipality of Yabucoa, Puerto Rico, Raul Diaz huddled inside his parent’s house.

He watched in horror as Maria’s powerful winds ripped the roof off of his own nearby home. The storm then also took with it his balcony and half of the bathroom wall. All he could mutter repeatedly was “It carried away my house.” 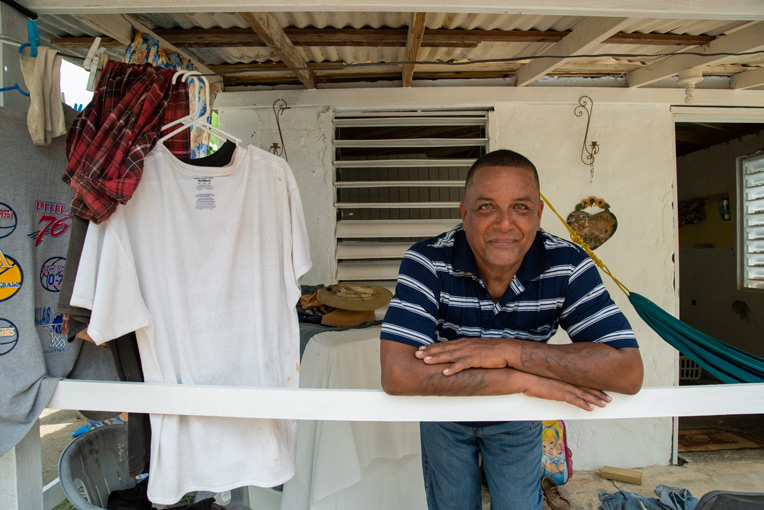 Samaritan’s Purse responded quickly in Puerto Rico, just as we did when Hurricane Irma tore a path of devastation through other parts of the Caribbean earlier in the month. Our DC-8 cargo aircraft flew dozens of relief flights to the U.S. territory, transporting tons of emergency supplies. These included 75,000 tarpaulins, 2,500 generator kits, 12,000 solar lamps, 24,000 Sawyer water filters, 1.4 million aqua tablets to purify water, tens of thousands of buckets and jerry cars to transport water, 6,400 Bibles and 34,000 grocery boxes in partnership with the Federal Emergency Management Agency.

Our immediate task was to help distressed Puerto Ricans recover from the horrific storm. But we didn’t stop there. Our next step transitioned to rebuilding—assisting people like Raul. Our work continues today.

Remembering Those in Need

Samaritan’s Purse staff identify vulnerable beneficiaries for our home repair program through local churches. Once homes are assessed and approved, we work with churches to select a local contractor and hire necessary labor. We purchase the materials and provide a grant to the contractor to complete the repairs.

Like many Puerto Ricans, Raul is unemployed and couldn’t afford the repairs. Lillian Martinez, the local liaison between the churches and the municipality government in Yabucoa, met Raul and told our staff of his home-repair need. 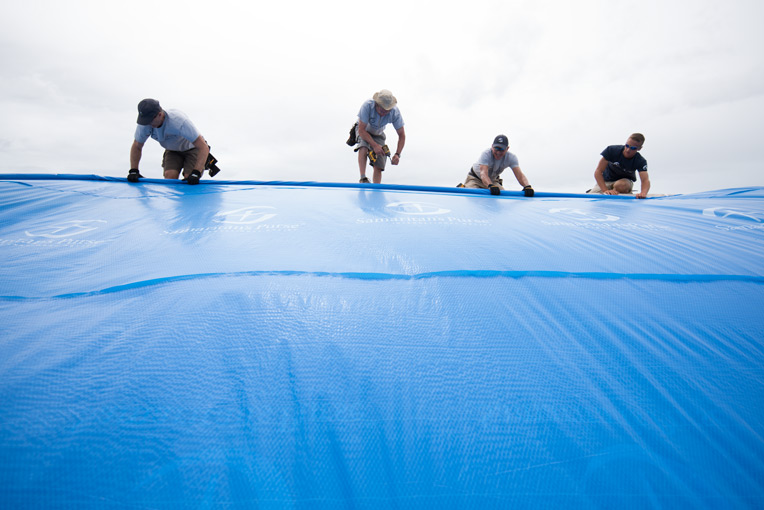 “I felt deep sadness seeing my house destroyed by the storm,” the 49-year-old said. “But when Samaritan’s Purse visited the first time, I felt happy. And when the help they promised actually arrived, I said, ‘They remembered me. They remembered Raul.’”

But rebuilding Raul’s home was not the ultimate end goal. With each homeowner, we want to show and share the love of Jesus Christ.

“I knew that God existed,” he explained. “My sister goes to church and I’d go with her sometimes.”

Because of the help he received from Samaritan’s Purse, Raul experienced the love of God, heard the Gospel proclaimed and committed his life to Jesus Christ.

“Before, I was on the wrong path, but not anymore,” Raul said. “I believe it is time to straighten my ways and say yes to God.”

Since his home was repaired, Raul has been volunteering at a local church in Yabucoa. He voiced his appreciation to Samaritan’s Purse. “Thank you all,” he said. “Groups like yours are the ones that we need to keep helping others who also need help.” 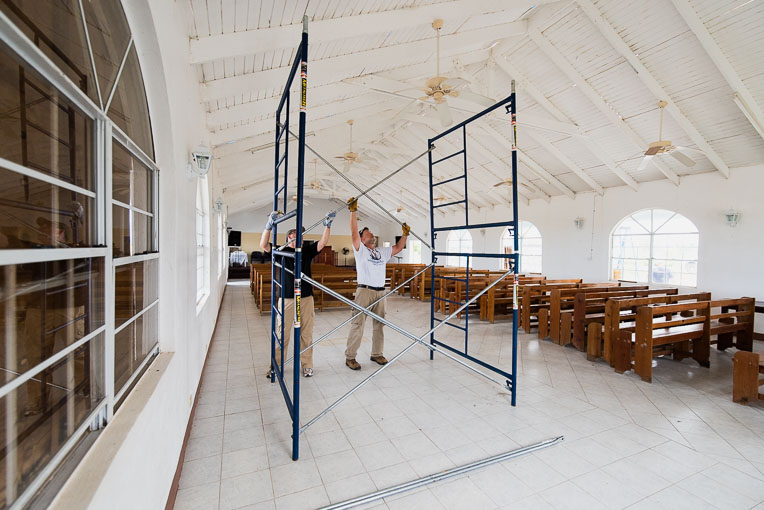 MANY CHURCHES WERE IN DIRE NEED OF REPAIRS AND REBUILDING. SAMARITAN’S PURSE HAS PROVIDED MATERIALS AND LABOUR FOR MANY CONGREGATIONS.

Raul’s house is one of 251 Maria-damaged homes that Samaritan’s Purse has repaired so far. We plan to do the same for at least 139 more homeowners across Puerto Rico by the end of the year.

Also during this rebuilding phase, we have repaired 30 damaged churches, with another 25 scheduled for repair in the coming months.

At the same time, in the hardest-hit remote areas of Puerto Rico, a solar project is bringing renewable, stable power for 100 households.

All total, in the year since Hurricane Maria struck, Samaritan’s Purse has helped some 351,000 hurricane victims on Puerto Rico—more than 10 percent of the island’s population.

Samaritan’s Purse has helped some 351,000 hurricane victims on Puerto Rico.

Last year and this year, Samaritan’s Purse has been working across the Caribbean, not just Puerto Rico.

After Hurricane Irma leveled Barbuda, then tore into St. Martin, and finally ravaged the Florida Keys, we responded. We dispatched disaster relief supplies and staff to each island and to four sites in Florida. 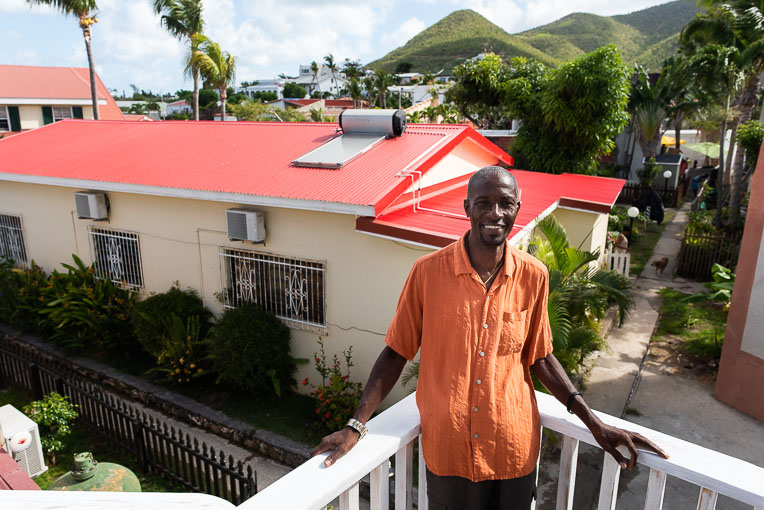 JULIAN JOHN’S ROOF WAS DESTROYED WHEN MARIA HIT ST. MARTIN. AFTER HE AND HIS WIFE PRAYED, SAMARITAN’S PURSE TEAMS SHOWED UP AND OFFERED TO REBUILD HIS ROOF.

We also deployed teams of disaster response specialists to the battered island of Dominica in the immediate aftermath of Hurricane Maria.

In addition to distributing supplies, we established 16 clean water points throughout the Caribbean that provided ongoing sources of clean water, totaling some 3.3 million gallons.

With the conclusion of the emergency response phase, Samaritan’s Purse continues to ship additional materials on barges, with about 3,500 tons of materials shipped by air and sea to the Caribbean so far. Many supplies have also been sourced locally.

The impact we’re making across the region is best told through the stories of people we’ve helped in Jesus’ Name. Here are a few examples:

• Irma was the first hurricane Julian John ever experienced. He’s lived on St. Martin since 1999. “It was frightening,” he said. “At one point, my wife Evelyn and I thought we wouldn’t make it, but thank God we did.” 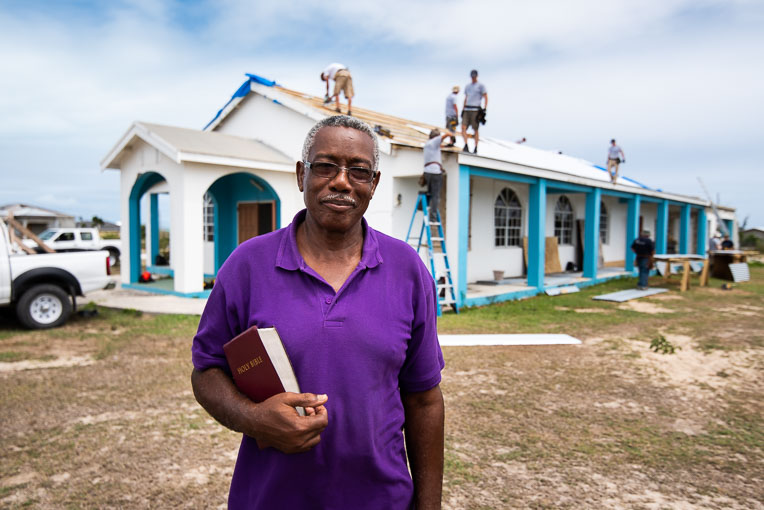 PASTOR WILLIAM ROSE OF THE HOPE FOR YOU COMMUNITY CHURCH ON BARBUDA CHARACTERIZED IRMA AS A “MONSTER.” IT SHREDDED THE CHURCH’S GALVANIZED ROOF.

• Pastor William Rose of the Hope for You Community Church on Barbuda characterized Irma as a “monster.” It shredded the church’s galvanized roof.

“Samaritan’s Purse came right away and put tarps on people’s roofs, provided generators and clean water,” he explained. “Your teams did a marvelous job putting a new roof on the church. It was a blessing to have you on our island.”

• Thousands upon thousands of chickens died the night Hurricane Maria’s gusts blew through Dominica. Samaritan’s Purse is helping poultry farmers get their farms back up and running again. We’re helping them build hurricane-resistant chicken coops and providing vouchers to restock with chickens and feed.

The local poultry association connected us with Norma, a poultry farmer with five boys. She lost nearly everything, but through our help, she’s started dreaming again. “You took it from there and worked with me,” Norma said. “Now I’ll have more birds and a better structure. Thank you.”