“I Saw The Light Of The World And Found Hope.”

Both my parents taught me that the Gospel has the power to change lives—it has certainly changed mine. That’s why I’m not afraid to be bold when I tell others about what Jesus did for us on the cross. “For I am not ashamed of the Gospel of Christ, for it is the power of God to salvation for everyone who believes” (Romans 1:16). 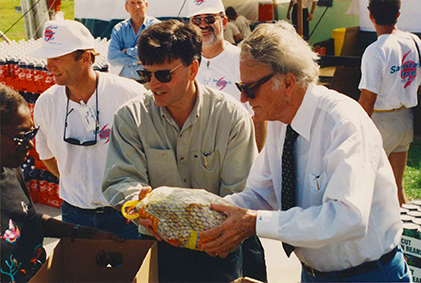 After the Devastation of Hurricane Andrew in South Florida in 1992. Franklin and his father took part in a food distribution for the victims.

And that’s why the focus of everything we do at Samaritan’s Purse is to share the Good News of eternal salvation through Jesus Christ for all those who repent and turn to Him. The Gospel message is at the forefront of all of our relief projects, and we are thankful for the way the Lord opens doors for us to take that message into some of the most remote and hostile areas of the world.

We often partner with local churches in this work. One pastor in Kenya walked six miles along dusty, rutted roads to reach a tiny, isolated village with lifesaving health and hygiene education. Our team there had equipped him—and dozens of other church leaders—to bring this much-needed training to local communities. We also taught them lessons on basic Biblical truths and how to share the Gospel with others in a simple and clear way.

A man named Simeon attended one of the training events. He was the village drunk and was known for starting fights in the town. But the Lord was working in his heart, and as he heard the Gospel message he recognised the sin in his life. Simeon repented and put his faith in Jesus Christ—a decision that changed his life. The pastor gave him a Bible, which he has been studying faithfully, and he has also stopped drinking. “I’m sharing my faith with others and telling them about Jesus and how He can change their lives, too,” Simeon said.

I Saw The Light

When 29-year-old Yusuf arrived at a camp for displaced people in Iraq, he felt completely hopeless. His town had been captured by ISIS, and his family barely escaped with their lives. Then his son became desperately ill. Yusuf received food from our large-scale distributions taking place in the camp, and when our staff learned of his son’s situation, they helped him receive the care he needed.

Most importantly, Yusuf heard the Gospel for the very first time through our team. “I realised that my life had been bought by someone who loves me,” he said. “I saw the Light of the world and found hope again.”

As Jesus spoke to His disciples about a group of children gathered around Him, he declared that ” the kingdom of heaven belongs to such as these” (Matthew 19:14, NASB). Tragically, however, millions of children around the world have never heard these words and don’t know about the Saviour’s great love for them.

In more than 100 countries, Samaritan’s Purse is working with local churches to teach precious boys and girls about Jesus through The Greatest Journey-our discipleship programme for children who receive Operation Christmas Child shoebox gifts. This year, our goal is to enroll 4.5 million children in this dynamic 12-lesson Bible course to add to the nearly 15 million who have participated in the programme since it began in 2009.

One of these is Kumar, whose alcoholic father used to beat him and even withhold food from him, causing the boy to become very withdrawn. When he was invited to an Operation Christmas Child outreach event, Kumar received a gift-filled shoebox and the best news he had ever heard-that God loves him. It was the first time he had ever heard that anyone loved him.

He began attending The Greatest Journey classes where he learned more about his Heavenly Father and gave his heart to Jesus . We praise God for the nearly 7 million children who, like Kumar, have repented of their sins and accepted Christ as Saviour through this programme!

Now, Kumar is a young evangelist, sharing the Gospel with his friends and family. ” I want to introduce this loving God to all the children in my village,” he said. Kumar ‘s mother and sister have also given their hearts to Christ. Isn’t it wonderful that God is using the testimony of this young boy in India-and many more like him-to proclaim the Good News of eternal salvation? It has always been my prayer that the Lord would use The Greatest Journey to raise up an army of young evangelists.

The Gospel In Action 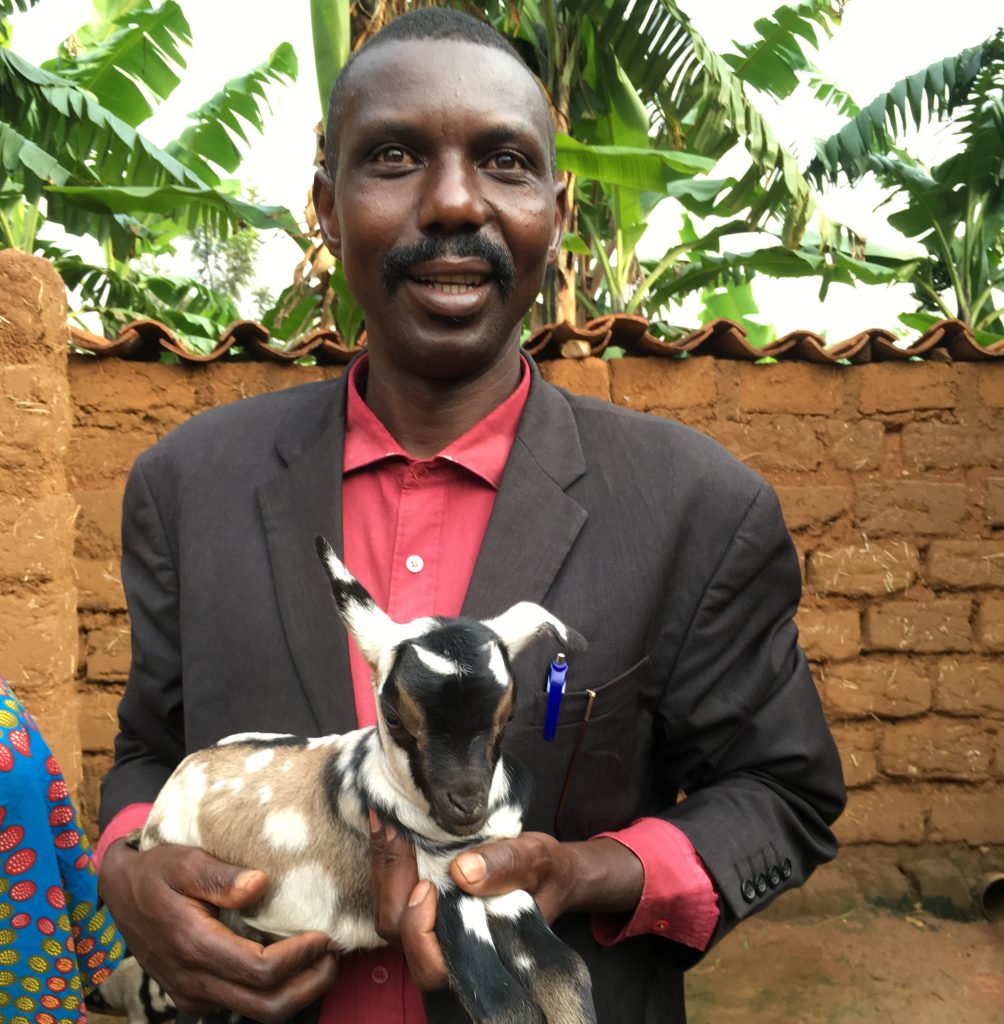 Foustin is 50 years old and is married with five children and 2 grandchildren. He lives in Nyabubare, Zinga Presbytery, in Eastern Rwanda. He used to make a living by running a motorbike taxi in the capital Kigali, but problems with his eyesight meant he could no longer offer this service. He felt so full of shame that he decided to return home to his village. “I came home with nothing…I was a failed man and a burden to others in the community.”

While Foustin was away, his local Church got involved in the Samaritans Purse Raising Families Programme. This trained his Pastor and church leaders to reach out to the most vulnerable families in the community, to bring them together to read the bible and pray for one another and to share ideas for how they could raise more income to support their families.

Seeing that Foustin was struggling, the Church savings and loans group lent him enough money to purchase two rabbits. Today this has multiplied into 38 rabbits and two goats! Income from the animals has also helped him to buy land where he grows enough food to feed his family or to sell at the market. The church has also encouraged him to build his own home.
“In less than two years my life has been totally transformed. These days I teach other people how two rabbits can produce all this. I have known the Lord for a long time, but Raising Families is the gospel in action. I have learned how to work hard and reach out to others.”

Thanks to your prayers and support, 715 Churches have received training and reached out to 13,296 vulnerable families in Rwanda. Praise God for the 1,969 people who have made a decision for Christ.

These are the kinds of stories that happen every day as we work in Jesus’ Name to relieve suffering and share the message that “God so loved the world that He gave His only Son, that whoever believes in Him should not perish but have eternal life” (John 3:16, ESV). Thank you for being part of this important work.

Your support and prayers are a crucial part of this work, and I want to say thank  you. I am also grateful for the outpouring of love from so many people whose lives were touched by my father ‘s ministry.

May God bless you.

Together we can equip churches and evangelists, and partner with Christian ministries around the world to share the Good News of eternal salvation through Jesus Christ.