Nineteen years ago when Brooke sent a shoebox gift, aged 6, via her primary school, she had no idea of the very special friendship it would lead to.

She lovingly choose a selection of gifts, including a teddy bear, pens, pencils and set of writing paper and envelopes decorated with pictures of badgers. She wrapped her shoebox in brightly coloured Christmas paper and included a photo and letter to let the recipient know who had sent the gifts and why.

Brooke and the other children happily sent the gifts on their way and continued with their Christmas festivities.

A few months later, to Brooke’s joy, a very special letter dropped through her letterbox. It had badgers on and it was from the young girl in Croatia who had received her shoebox gift!

To this day, Brooke still has that very first letter and the pair have been in contact ever since, via letter, email and recently instant messaging.

Brooke shares what happened next:

For a long time we had spoken about meeting up, but with the age gap between us, there was never an appropriate time, with her at University and then me at University, and then she got married and had a child and I started a postgraduate course and moved abroad.

Finally, this summer, 19 years later, I managed to make it to Croatia to meet her.  I travelled to Rijeka and spent the day excitedly waiting for her to finish work. Finally, she arrived with her husband and it was the weirdest thing – it was as if we had known each other for ages! We were hugging each other trying not to cry with how happy we were to finally meet in person. We spent the afternoon together and they showed us their town.

The next day she invited me to her hometown in the mountains for a barbeque. After a 45 minute bus journey to her town in the valley, I was met by her mother and brother, which was amazing! I did not think I would get to meet them. They drove me up to the mountain town and my friend and I spent the day having the most amazing traditional Croatian food, learning Croatian and meeting her friends and daughter. 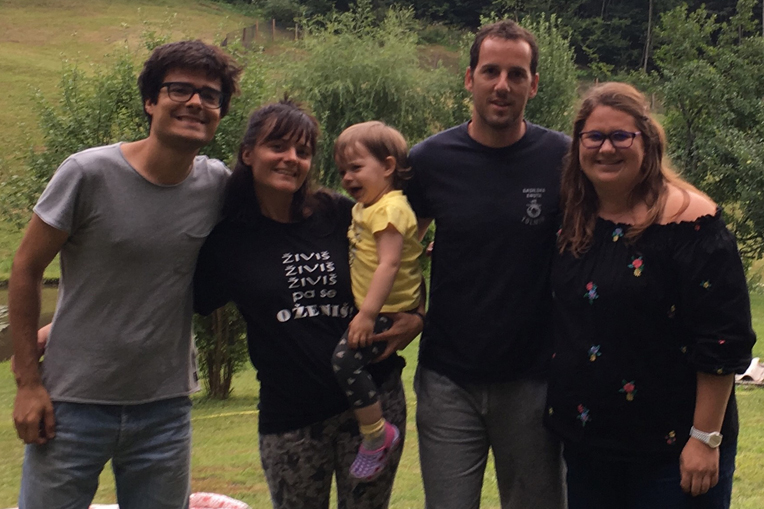 Hrvoje (Iva’s brother), Iva, her daughter, her husband and Brooke.

It was absolutely awesome to hear how she had received the shoebox, why and what had happened in her town. It was so sad to hear the memories she had. She told me some of her friends (that I had met at the barbeque) had fled to her town for safety as children. She had received her shoebox through school and her brother had got one too. She was really grateful.

For us, we feel it is such a unique story. 2 people united through 1 shoebox. I feel so lucky that we have managed to build such a great bond over the last 19 years! For me, I was so young (6), I did not really comprehend what she was going through, I just thought it was so much fun to write to someone elsewhere in the world. In all honesty, it was not until I went to Croatia this year, that the reality of what she experienced hit me. Seeing her town with the warning signs and sirens still up and her telling me about the areas worst hit, hearing about the stories of friends, and then seeing some areas still war torn. You can still see the relative poverty in some areas. We always think of Croatia as being a tourist stop now, but outside of those main coastal areas, it is still a recovering country.

My wish now, is that one day, she can come visit me and my family in the UK. I would love to show her around and we are hopeful that in a few years, she will have saved enough to come with her family and visit me, although in the meantime, I am hoping to go and visit her again for a bit longer!

We both think it is a kind of ‘fairy tale’ story and one we really want to share – that these shoebox gifts send a message of hope to the children receiving them and that they really do mean something to them.

LEARN HOW TO PACK A SHOEBOX GIFT

Please note:  While we love hearing these stories and are delighted to share them, including your address is a personal choice. We cannot recommend it for reasons of security.