Ministering to Refugees Stranded in Greece

Tents and cooking fires fill the Greek stations where Syrian and Iraqi refugees, until recently, would catch trains and travel deeper into Western Europe in search of a new life. Now, with recent border closings, all refugees can do is wait and hope, whether on the outskirts of cities like Athens or other areas, such as Samos, Chios, and Idomeni. 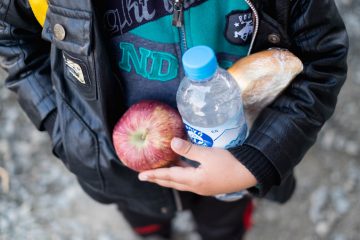 Simple meals distributed by Samaritan’s Purse and other organisations have often been the only source of sustenance for refugee families.

Throughout the camps children cradle an apple each and a baguette or some other simple meal, carefully clutching the day’s first food, which they’ll eat in a tent they’ve called home for weeks or longer. Without the help of Samaritan’s Purse and other relief organisations, many Iraqi and Syrian refugees would have little hope of finding suitable food, water, sanitation, or shelter. About 60 percent of the refugees in Greece are women and children.

Samaritan’s Purse has a team of over 200 national and international staff responding to the refugee crisis in Greece. These responders are providing critical humanitarian assistance to tens of thousands of refugees and migrants. In northern Greece, Samaritan’s Purse has distributed over 700,000 meals to the vulnerable population at Idomeni as an implementing partner for the United Nations Refugee Agency (UNHCR).

In addition, we are spearheading a multi-agency non-food item distribution in 30 sites across northern, central, and southern Greece where the majority of refugees are now stranded. Samaritan’s Purse also maintains a strong presence on the islands of Lesbos, Chios, Samos, Leros, and Kos. In support of the Greek authorities, these teams continue to serve arriving people and those in detention centres. 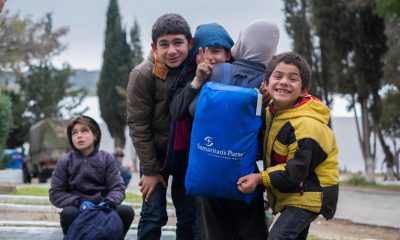 At the refugee camp in Elaionas, Samaritan’s Purse recently distributed UNHCR baby care kits, female dignity kits, hygiene kits, soap, backpacks, mosquito nets, and buckets. Those in Elaionas have lived there for two months. Originally designed for 1,500 people, Elaionas is home to 1,620 Syrians, Afghanis, Somalians, and others from war-torn countries.

Meeting Needs, Meeting Christ
In the early days of this diaspora, Samaritan’s Purse staff and volunteers pulled boats safely to shore along the Aegean Sea. We provided blankets, first aid, food, water, and other aid in Jesus’ Name for refugees fleeing ISIS and seeking sanctuary in Western Europe. 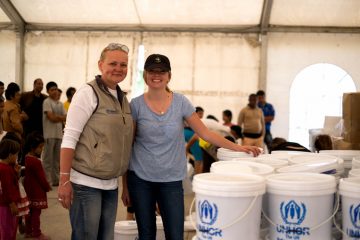 Working at Elaionas camp through the United Nations.

Whether moving or waiting, refugees are on a restless journey to find a new home and life. This gives Samaritan’s Purse an amazing opportunity to build relationships and share the Gospel at Meeting Place tents set up along the path in Greece and beyond. At these stops refugees can come and sit with a cup of tea, charge their mobile phones, and prepare for whatever comes next. Our teams strike up conversations with them and tell them about God’s unending love in Christ.

“The people we are serving have suffered through years of war and oppression and that is why they risked everything to come to Greece,” said Mara Ladewig, Regional Manager for Europe and the Middle East. “It’s a complex situation but what is clear to us is that we have a once-in-a-lifetime opportunity to demonstrate Jesus’ love to people long neglected and forgotten.” 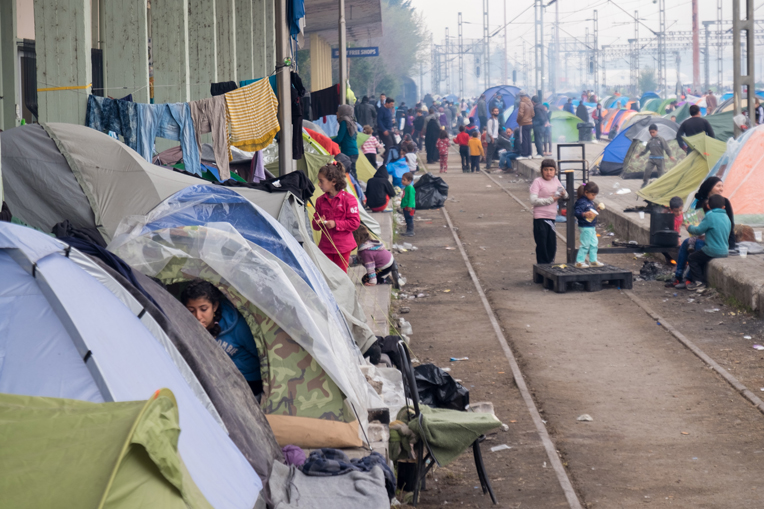 The train station in Idomeni has stopped moving refugees further into Europe and now has transformed into a makeshift camp.

Now as refugees continue to settle into camps throughout Greece, we are providing short-term solutions to issues related to capacity and infrastructure. Samaritan’s Purse workers are helping to establish appropriate Water, Sanitation and Hygiene (WASH) practices to prevent waterborne or other illness in the over-capacity makeshift camps.

“Samaritan’s Purse is standing in the gap, and putting flesh onto the frame of what would otherwise be a cold, lifeless, and, ultimately, shallow response,” said Gabe Morris, a Samaritan’s Purse staff member who recently traveled to Greece to participate in our response. “Through exceptional delivery of tangible humanitarian aid programmes like shelter, water, food, and sanitation, the teams at Samaritan’s Purse Greece are truly serving as the hands and feet of Jesus.”