A village is being transformed by a new Samaritan’s Purse livelihoods project.

The job recruiter promised Ko Eh Doh* a stable job at a construction company with a good salary. He would have to leave his home in Myanmar and travel to Bangkok, Thailand, but with limited employment options in his village, Ko Eh Doh and 12 others decided to go. The recruiter promised to take care of all their travel arrangements and documents.

In order to pay this recruiter, Ko Eh Doh borrowed money from others, giving up his land as compensation. Despite the setback, he remained hopeful about the future.

Yet, it didn’t take long for Ko Eh Doh to realize that the recruiter had taken advantage of them. The man sent them to Thailand through unsafe means, and instead of working at a construction company, they were taken to work on a fishing boat.

The work was strenuous and difficult, and after some time, Ko Eh Doh and the others could not bear it any longer. They asked their manager to send them back to the Myanmar border, but he refused.

Finally, after five months of struggling, someone helped them get to the Thailand-Myanmar border, and they were able to return to their village. 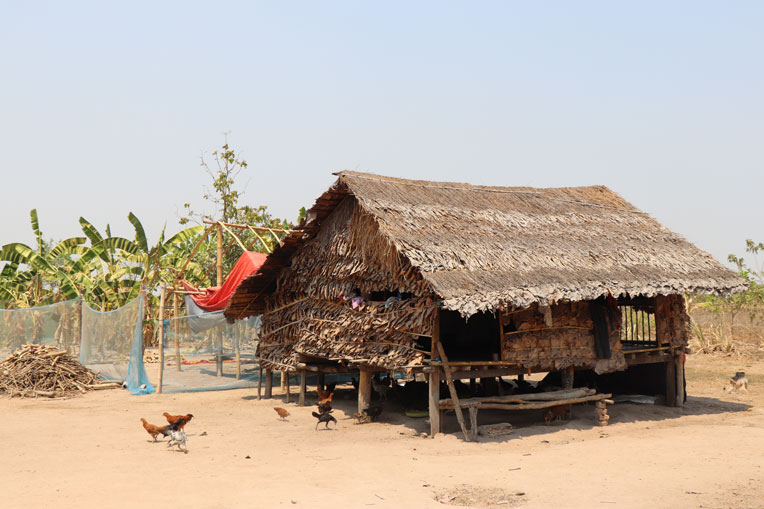 Ko Eh Doh’s home in his village in Myanmar.

Starting Over After Trafficking

Ko Eh Doh returned home with little money and without a place to call his own. Now struggling more than before he left for Bangkok, he didn’t know where to turn. Ko Eh Doh could not find a way to earn income in order to buy back his land.

Although the situation looked grim, Ko Eh Doh connected with the Alleviating Vulnerability through Livelihoods (ALIVE) project that Samaritan’s Purse was piloting in his area. The project helps vulnerable households and trafficking survivors by offering them livelihood opportunities.

Ko Eh Doh received education on chicken rearing and financial management. He cared for his birds until they were ready to sell, and before long, he had made enough money to buy back half of his land.

Encouraged and with new determination, Ko Eh Doh continued to work hard at raising and selling chickens. A desperate situation turned into an opportunity to regain dignity and purpose, providing a way for Ko Eh Doh to support his family.

A Blessing for the Whole Community

Our ALIVE project has not only enabled Ko Eh Doh to reclaim his land, but it has also empowered him to share newfound resources and knowledge with his community. 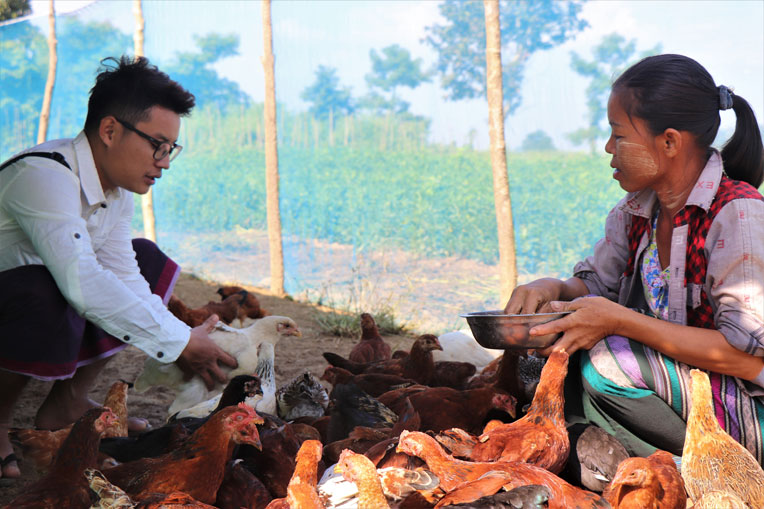 Chicken raising is reaching both project beneficiaries and community members.

“As this is a pilot project in the area, community members are interested in the process and have started rearing chickens in the same way as project beneficiaries,” said Saw Eh Doh Soe, project coordinator.

“When people ask about the process, our beneficiaries explain it very well and they build a network with these people through their conversations about chicken rearing.”

“I am so proud of the beneficiaries because even though they do not have much, they still have faith in God and are willing to serve as much as they can,” Saw Eh Doh Soe said. “They are sharing what God has blessed them with. This project is providing not only for their physical needs, but it is also serving as spiritual encouragement for those in need.”