Alex Day from Samaritan’s Purse UK spent three weeks in Sendai, Northern Japan, helping with the distribution of relief items following the 2011 earthquake off the Pacific coast of Tōhoku. He recalls his experiences by answering a few questions.

What struck you from the scenes you witnessed?

We spent a day in one of the worst affected areas, a place called Ishinomaki.  We stopped next to a house that was a complete wreck and a thought hit me – the absolute best case scenario for the owners is that they have lost their home, their car and likely their job as the local economy has been destroyed. As shocking as that sounds, that is the best situation they could be in.

Did you visit any shelters? If so, what were they like?

We went to one shelter to distribute hygiene kits, kitchen kits, underwear, tarps and blankets. There were over 1500 people in crowded, cold, miserable conditions: effectively living the life of a refugee. My thought as we drove away was that the people there were “existing” rather than “living”. It was very sad to see.

Were there any aftershocks while you were there?

There were lots of smaller shocks but we did experience a 7.1 earthquake while we were there which lasted almost one minute. It violently shook the apartment we were in and things came crashing off the walls. It caused a tsunami warning but thankfully it didn’t materialise. 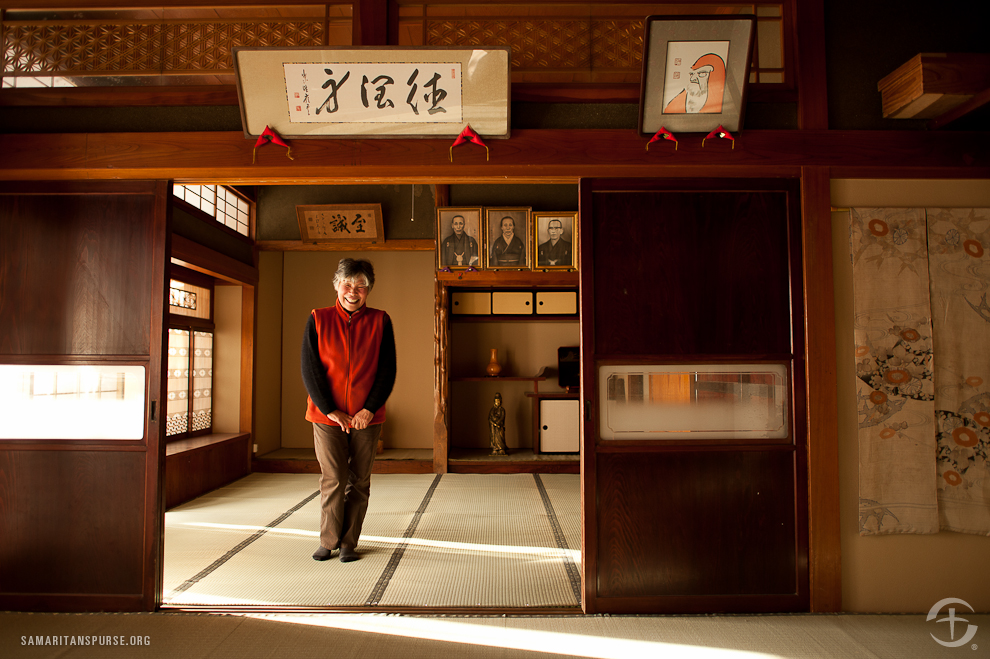 Hiroko Endo was the first person to receive help from us in her community near Shichigahama, Japan. She says, “Because of Samaritan’s Purse I have energy and joy! I am so happy that the volunteers could make this such a beautiful house.”

How were the Japanese people around you responding?

The Japanese people were great to work with – extremely hard working, very polite and willing to get involved. The amount of respect shown to us and each other was amazing. We were working with some high school students who volunteered in our warehouse. They were there pretty much every day from 9-5, working free of charge doing a lot of menial manual tasks and never complaining.

Apparently less than 0.5% of people claim to be Christians. So it was great to see the Body of Christ in Japan coming together and uniting in this response. It’s even more remarkable when you consider that many of these churches were affected themselves by the disaster.

Looking to the future, where do you find hope?

It’s clearly going to be a long road to recovery both in terms of the physical reconstruction and the psychological effects that the Tsunami has had on people. However, Japan is the fourth richest country in the world, so I’m sure the physical recovery will be quicker than if the earthquake and tsunami had hit a poorer nation. Also, as the church is at the ‘sharp-end’ of our response, I am hopeful they can use this opportunity to demonstrate God’s love for the Japanese people in a practical way.