Rebuilding Houses, Churches, and Lives Across the Caribbean

Much of last Autumn’s news focused on pain and devastation in the Caribbean after the double whammy of hurricanes Irma and Maria. Now those daily reports have long since faded as crews have moved on to cover other events.

Samaritan’s Purse nonetheless continues serving the islands of Puerto Rico, Barbuda, Dominica, and St. Martin. We mounted an urgent and ongoing response after both monstrous storms, and today we’re transitioning from recovery to rebuilding on each island.

From Emergency Relief to Reconstruction

One of the strongest Atlantic storms ever observed, Irma battered the region first in the beginning of September. Two weeks later Maria unleashed her fury. They were the first pair of Atlantic Category 5 hurricanes to occur during the same year since 2007. 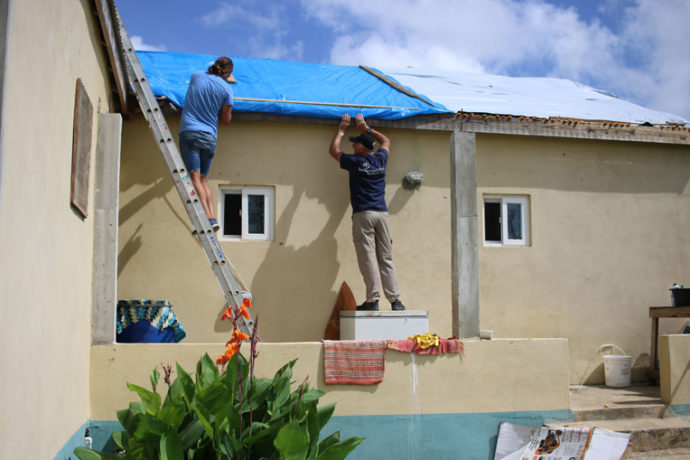 Our teams responded immediately after the devastating hurricanes

We also distributed food and set up water treatment centres. On Puerto Rico, we deployed our helicopter to deliver relief to remote communities.

As these initial disaster relief efforts wound down late last year, we started moving forward with plans to help rebuild homes and churches on all four islands. The work has already started on Barbuda, Dominica, and St. Martin; and rebuilding efforts on Puerto Rico will be launched very soon.

In certain circumstances, we will be recruiting volunteers who can travel to and work on the respective islands. Otherwise we will rely on our own international field staff or hire local help-a move that will aid the local economy.

Wherever we’re deployed, our staff and volunteers will partner with local churches to identify at-risk families in great need of assistance. Together, we’ll serve and meet tangible needs in the Name of Jesus Christ.

Dave Holzhauer, regional director for Northern Caribbean, said: “For us, this is an incredible opportunity to empower local churches to reach their own communities in a way that will draw more people into the church and expose them to the Gospel of Jesus Christ.”

“This is an incredible opportunity to empower local churches to reach their own communities.”

Here’s a breakdown of our plans:

“We’re excited God is giving us this opportunity to demonstrate Christ’s love in word and deed,” said Jason Edgerton, regional director for Latin America and the Caribbean, “and to partner with numerous evangelical churches as they seek to evangelise and disciple people on their island.”