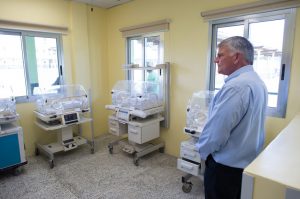 Newly reconstructed by Samaritan’s Purse, ELWA Hospital is poised to provide even better services to Liberians from the youngest to the oldest.

When Ebola Virus Disease spread to Liberia in early 2014, ELWA Hospital in Monrovia was thrust to the front lines of a battle to save lives and stop the deadly outbreak. It was at ELWA that Samaritan’s Purse set up an Ebola Treatment Unit to care for patients with the highly contagious and dreaded disease.

We had already begun working on new facilities for the hospital in Liberia’s capital, but construction was suspended and all our efforts turned to treating Ebola patients. More than 4,800 Liberians died from Ebola and more than 10,500 were infected.

When the country was finally declared Ebola-free in early 2015 we resumed construction at ELWA and the new facilities—nearly double the size of the old hospital—are now ready for patients. 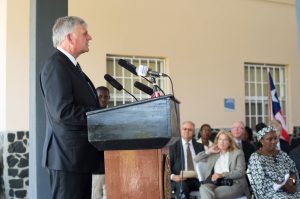 Graham spoke about the leper who met Jesus and was healed by Him, as recorded in chapter eight of Matthew’s Gospel. He compared the stigma and horror of leprosy to Ebola, and made the point that Jesus cared for the sick and the hurting both then and today.

“Our Lord didn’t back up. He didn’t run away,” Graham said. “He reaches out and touches the man. Be clean. Immediately [the man’s] leprosy was cured.”

Graham then pivoted to the incident when Jesus was in a boat with His disciples during a storm on the Sea of Galilee. “The disciples lost hope. Your nation has been through some storms. Maybe there were times when you lost hope,” he said. “That’s why we’re here in Liberia. We want this hospital to be a testimony. We want people to put their faith and trust in the Living God and His Son Jesus Christ. If we put our faith and trust in Him, we don’t have to worry about what storms come. We know we are safe and secure in His hands.” 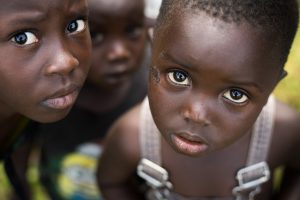 Samaritan’s Purse is leading a number of post-ebola recovery projects throughout Liberia aimed at bringing the hope of the Gospel to people young and old.

ELWA Hospital was founded in 1965 by Serving in Mission (SIM). It’s the hospital where Dr. Kent Brantly, a Samaritan’s Purse post-resident, was working when he contracted Ebola. He and Nancy Writebol, who also was diagnosed with Ebola while serving at ELWA, were flown to the United States and received treatment at Emory University in Atlanta, Georgia. August 21st marked the two-year anniversary of Brantly’s release—Ebola-free—from the hospital.

ELWA already treats thousands of people around Monrovia, and the new facility will increase its capacity to provide quality care to more patients.

“We as Christians believe God is a miracle-working God. We are witnesses. We have seen God work,” David Writebol said. “This hospital is possible because of everyone doing what God called them to do. I hope we enjoy the impressive site. But I also hope we will look beyond and our gaze would see God’s hand working through a great number of people—people committed to the Gospel and doing good to our neighbors.” 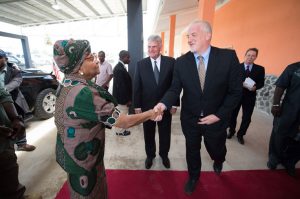 Kauffeldt then continued: “It’s because of God’s grace and mercy in our lives we are here today to celebrate…Without God’s help, we wouldn’t be here today. I give Him all the glory. A project like this isn’t possible without many people.” Kauffeldt and his wife, Bev, have served 12 years with Samaritan’s Purse in Liberia and spearheaded our response to Ebola, providing Christ-like direction and encouragement to hundreds of staff members during very trying times.

Greta Van Susteren, one of America’s most respected news commentators and an ardent supporter of Samaritan’s Purse, also attended the ceremony and visited our Liberia project sites this past week. “I’ve traveled all over the world with Samaritan’s Purse—they will stand by you no matter what. They love helping you,” she said.

Van Susteren’s reporting helped focus attention on the Ebola crisis during a time when much of the world did not understand what was taking place in West Africa. “The heroes are the people who stayed and fought [Ebola],” she said. “This was a horrible thing that happened to this nation. It breaks my heart to see what families went through. The numbers are staggering.”

Foya: Where it All Started 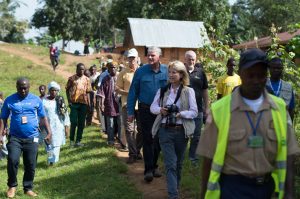 Franklin Graham, Greta Van Susteren, and the Samaritan’s Purse staff members came to observe some of our projects in the Foya area.

When Ebola spread to Liberia it came first for Foya, a rural community in Lofa County about 140 miles from Monrovia near the border with Guinea and Sierra Leone. Samaritan’s Purse launched a massive Ebola education campaign, set up community care centers, and temporarily took over management of the Foya Ebola Treatment Unit, originally built and run by Médecins Sans Frontières (MSF/Doctors Without Borders).

Before the Ebola outbreak Samaritan’s Purse had been working in Liberia for more than a decade through projects such as agriculture, water and sanitation, livelihood, nutrition, literacy, and child protection. In post-Ebola Liberia, we have added projects like support groups for Ebola survivors, some of which meet at ELWA, and leadership development and trauma counseling.

In advance of the hospital dedication, Graham visited a village in Foya and met beneficiaries of post-Ebola projects. One of the first people he met was 16-year-old Francis, who participates in a support group. Francis’ parents died from Ebola, leaving Francis as one of almost 6,000 Liberian children who lost one or both parents to Ebola. Francis now shoulders the burden of supporting his two siblings.

Graham and Van Susteren also visited an Ebola memorial with names of the 23 people in the village who died from Ebola written on one side in red and names of the 20 who survived the disease written in white on the other side.

“Our hearts are sad for the loss of so many people you love,” Graham said, “yet we rejoice to see the names in white. It does my heart good to see that you have this to always remind you of the faithfulness of God.”

“This is a great reminder of life and death, but beyond life and death is eternity. God holds the keys for our future,” Graham said. 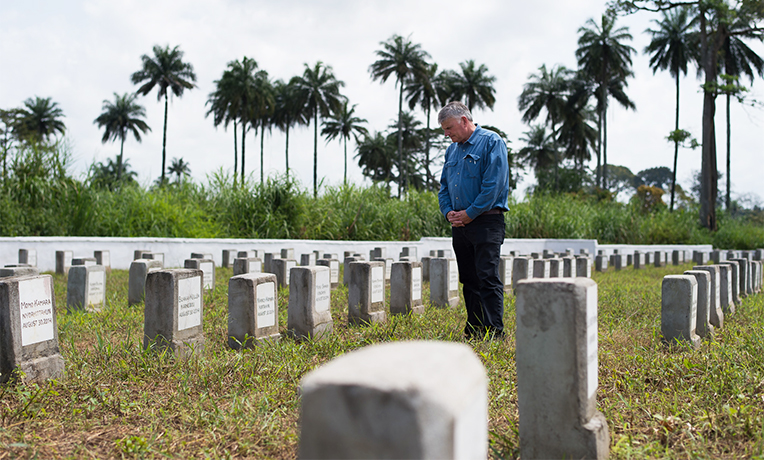 In addition, Graham and his team visited a larger, 251-gravesite Ebola Memorial Cemetery.

While in the Foya village Graham heard an update on the RECAL project from Samaritan’s Purse Project Manager James Briggs. RECAL stands for Rebuilding Ebola-affected Communities through Agriculture and Livelihoods. Briggs introduced Graham to Hawa, a 25-year-old mother who is an Ebola survivor and project beneficiary.

“She got infected through taking care of her brother, who was a pastor,” Briggs explained. “She didn’t think she would survive because she saw her friends die.”

A Day of Thanksgiving 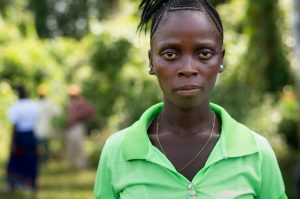 Hawa, an Ebola survivor, now benefits from one of our projects in Foya.

Today’s ceremony was not just about opening a new hospital, but about celebrating and remembering God’s faithfulness. God brought ELWA, Liberians, and Samaritan’s Purse staff through the Ebola crisis, and during the darkest of times, God used our staff to demonstrate His love.

Ellen Johnson Sirleaf, Liberia’s President since 2006, addressed the nearly 500 ceremony attendees. She said the new hospital is a monument to “long-standing friendship” and to “God’s love for Liberia.”

“That love has been demonstrated in so many ways,” she said. “This symbol gives us hope, gives us strength and determination. Liberia is rising.”

Caring for Patients in Jesus’ Name

With expanded and updated facilities, ELWA Hospital is better positioned to continue providing the compassionate and quality care valued by patients. Mafata, a young mother of two, drove five hours to bring her three-year-old daughter to ELWA.

“They have good doctors here and they encourage me,” Mafata said. “They are patient with me and my baby.” 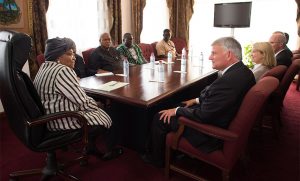 Dr. John Fankhauser, the hospital’s Executive Director, said the new facilities will also help ELWA have a greater influence in the community.

“It’s a hospital that’s seen an enormous amount of work and lives changed in its walls. This is a continuation of what God has been doing through ELWA. This is a giant step toward modernization,” he said.

The new 46,000-square-foot ELWA facility sits on seven acres and includes three operating theaters, male and female wards with 20 beds each, pediatric and obstetric wards with 18 beds each, seven labor rooms, outpatient and infectious disease departments, a full lab and imaging department, and an emergency room. 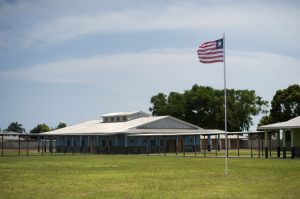 One wing of the new ELWA Hospital, which will be better positioned to provide excellent care to patients.

Fankhauser expects ELWA to become a teaching hospital for the next generation of physicians. Samaritan’s Purse is working toward having a World Medical Mission post-resident at ELWA.
No matter how much the hospital’s interior or exterior changes the focus will remain the same—demonstrating the love of Jesus Christ.

“Our Christian faith is part of our essence here—we are Christians who provide health care,” Fankhauser said. “We are Christians first, and an extension of our faith is to do everything that we can to provide excellent care to patients as a gesture of love.”

Fankhauser asked for prayer for patients who are Christians, that they will grow in their relationship with Jesus and know Him as their strength and peace. He also asked people to pray that patients who do not know Jesus Christ will hear the Gospel through ELWA and put their faith in Him.