Samaritan’s Purse distributed approximately 400 backpacks to women and children at a refugee transit centre on the Macedonian-Greek border on September 17. Another 300 were given out on September 18.

Refugees from Syria, Iraq, Iran, Afghanistan, Pakistan, and other Middle Eastern and African countries have recently been pouring into south eastern Europe. Most arrive in Greece by boat from Turkey. They cross from Greece into Macedonia with hopes of eventually making it to western or northern Europe.

Hazem Khotib and his wife, Nahed, left their home in Syria in search of safety. Hazem was worried that his three children, Tala, Tima, and Gazi, would not receive a good education or have a good life if they stayed in their city.

Tala, 11, and Tima, 9, from Syria received backpacks from Samaritan’s Purse on September 17.

“It is a sad situation because there must be a good reason for you to uproot your family, and there are a lot of families now we see with very small children,” said Pavle Kostadinov, one of our church partners in Macedonia. “You don’t move from Syria and go from point to point to point to point to get here … unless there is a dire need for you to move and go somewhere else.”

However, it was difficult for Hazem to leave his life behind. He worked as a sales manager, and his wife was a hairdresser.

“In Syria, I have great, great life,” he said. “I have good position. I have cars. My wife have job. I have family.”

But they didn’t have safety. So a year and a half ago, Hazem moved his family to Turkey. He was unable to find work, so when he heard that he may be able to cross into Europe, he decided that he had to try. 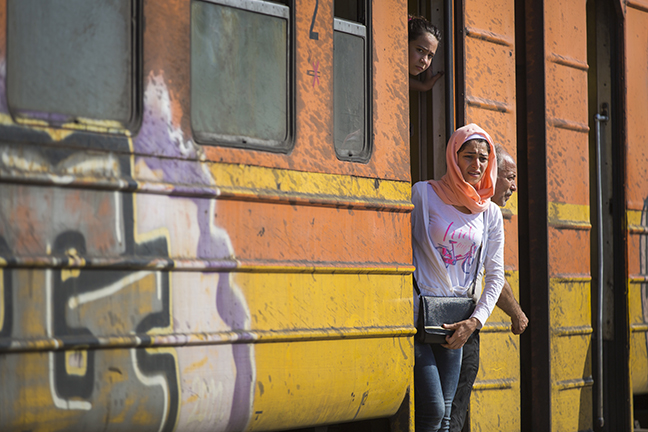 Refugees are facing increasing challenges to passage across Europe.

He and his family took a small, wooden boat across the sea. They were fortunate—their boat only had 16 people— and they were able to pass through without capsizing or having to be rescued. Several boats crossing the Aegean Sea between Turkey and Greece have been overloaded, and thousands have perished.

Although many men are leaving their families behind until they can find better circumstances, Hazem said that his wife would not let him go alone.

They’re traveling with their 11- and 9-year-old daughters and 1-year-old son. Hazem said it has been difficult to travel with small children, but he doesn’t have a choice.

Samaritan’s Purse helped Hazem’s family today by providing backpacks to his two daughters and his wife. The children’s backpacks contained a blanket, a towel, hygiene products, food, a toy. Their mother’s backpack contained similar items, along with baby diapers and feminine hygiene products.

My wife tell me, ‘We’re together,” he said. “‘Live together, die together.

Because of the fluidity of the refugee situation, disaster response can be difficult. People are constantly on the move, and the crowd ebbs and flows at different points.

“We don’t really know what is happening between one day and the next day—actually, hour to hour,” Pavle said.

Please pray for Samaritan’s Purse as we try to meet the needs of these refugees. Pray for wisdom, guidance, and safety. Most importantly, pray for the refugees as they seek asylum to begin new lives.

“We cannot give a very systematic solution to the problem, but we can pray,” Pavle said. “All of these people are moving from dominant Muslims areas to dominant Christian areas. I’d really like them to see that Christ makes [a] difference.”

Beauty in a Refugee Camp in Greece