Kitchen kits, jackets, and more are getting into the hands of those
forced to flee jihadists

Staff members and local partners are distributing 80 tons of relief items airlifted by Samaritan’s Purse to the Kurdish region of northern Iraq. Along with other supplies the ministry has purchased in country, the airlifted items – which include children’s clothing, jackets, blankets, socks, hygiene kits, kitchen kits, and tarpaulin – will help thousands of families displaced by ISIS.

Seasonal rains are coming and temperatures are expected to drop below freezing this winter, making life even more difficult for families who had to hurriedly escape Islamic State jihadists. Many are living in tents or unfinished buildings without heat.

In June 2014, Samaritan’s Purse began a sustained and ongoing ministry to those fleeing ISIS advances. Several weeks later, that effort was significantly increased as Sinjar and towns on the Nineveh plains fell into militant hands. Reports indicate as many as 500,000 displaced persons are now living in the Kurdish area of Dohuk Governorate with another 200,000–250,000 in Erbil, capital of the Kurdish semi-autonomous region.

Ongoing Relief for the Persecuted 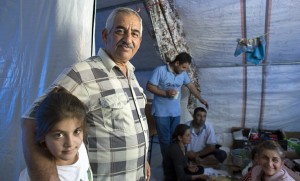 Nissan with his granddaughter and other family members in their tent in Erbil.

On Monday 27 October, Samaritan’s Purse distributed 128 kitchen kits to residents of one camp in Erbil. Most of the more than 200 families who have found shelter there are Chaldean/Assyrian Christians from the village of Qaraqosh. When speaking among themselves, some use an ancient tongue, distantly related to the Aramaic spoken in Jesus’ day.

Over the past few months, Samaritan’s Purse has provided food, blankets, mattresses, a large generator, a playground, Christian literature, and 40 dome tents to the camp. More relief will arrive in coming weeks as well. 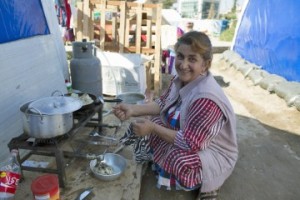 Nissan, 48, and his family were among those to receive a kitchen kit with pots, plates, cups, and utensils. Grateful for the help, they began using the items to prepare lunch. His escape story represents the experiences of the majority of people at the Erbil camp.

As ISIS advanced on 6 August, Nissan’s family joined the chaotic mass exodus from Qaraqosh. They hitched rides in terrible traffic, walked over seven miles, and waited hours at checkpoints to finally reach Erbil. A college-educated pharmacist, Nissan managed to bring along two bags of medicine and not much else. Though they tried to take along some rice and oil, they ended up having to leave it on the streets. After three days in an Erbil hotel, they moved to the camp.

Nissan and his wife today share their dome tent with three daughters, two sons, a daughter-in-law, and 3 grandchildren.

“It is very difficult to stay here,” he said. 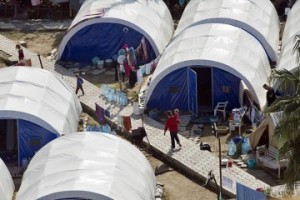 More than 200 families have settled in the Erbil camp.

He has no job and the cost of living is high. (They need money for food, clothing, daily items, etc.) Even though he’s heard that businesses and houses have been looted back at his village, the Christian man wants to return to his lifelong home as soon as it is relatively safe.

“If the Iraqi national forces come and remove all the ISIS from Qaraqosh and all of Mosul, all the people will return quickly,” Nissan said. “It is hard to leave your home.”

Father Douglas, who runs the Erbil camp, seems to always be smiling and tries to keep the families encouraged. He previously lived in Baghdad and while there was kidnapped, beaten, and shot by those who hate the name of Christ.

“As Christians, we don’t have to complain,” he said. “We are already prepared for black, bad days. We are still like salt and light. We are few but we are making a difference.” 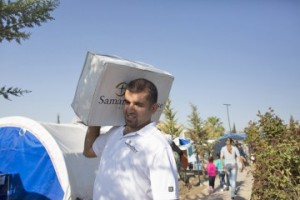 As they deliver supplies, Samaritan’s Purse staff members and ministry partners have opportunities to talk about Christ.

In broader actions, Samaritan’s Purse has given out more than 3,900 baskets of food since the beginning of this response. Each basket is intended to supply the basic needs of a family of five for one week.

Samaritan’s Purse has also distributed more than 4,900 pillows and 7,500 mattresses to displaced families throughout northern Iraq. Beneficiaries include those from Christian, Yazidi, and Muslim backgrounds.

Even before the airlifted supplies arrived, Samaritan’s Purse had already reached more than 5,800 families with 20,000 blankets and more than 3,100 kerosene heaters.

As we work with our local church partners—some of whom are displaced themselves and have lost nearly everything they own because of ISIS persecution—they are growing bolder both in meeting physical needs and in proclaiming the Gospel. As they help with distributions, they are coming into contact with Yazidis, Muslims, and others who never would have given them a hearing before.

Please continue to pray for our staff and church partners ministering in Iraq, and for displaced families to receive the help they need as winter approaches. 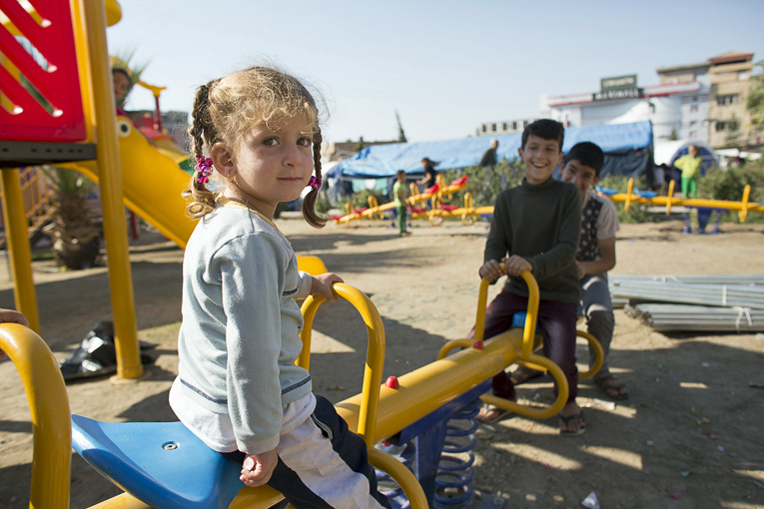