Responding to God’s Call in the Jordanian Desert

1971: Franklin Graham visits Jordan, and God begins to challenge him through staff at Mafraq hospital.

When Franklin Graham was 19, he volunteered to drive a Land Rover from England to Jordan so it could be used by medical missionaries Aileen Coleman and Dr. Eleanor Soltau at a tuberculosis hospital called the Mafraq Sanatorium. During his visits to Jordan, Franklin first felt the Lord calling him to help the disadvantaged people of the world.

In 1973, Franklin was introduced to Bob Pierce during Billy Graham’s Atlanta crusade, and he recommended that Samaritan’s Purse support the Mafraq hospital. Even today, Mafraq remains one of the longest-running partnerships of Samaritan’s Purse. Dr. Soltau died in 1997, but Aileen Coleman, now 89, continues to work in Jordan, caring for the Bedouins and sharing the Gospel in the midst of a challenging culture. 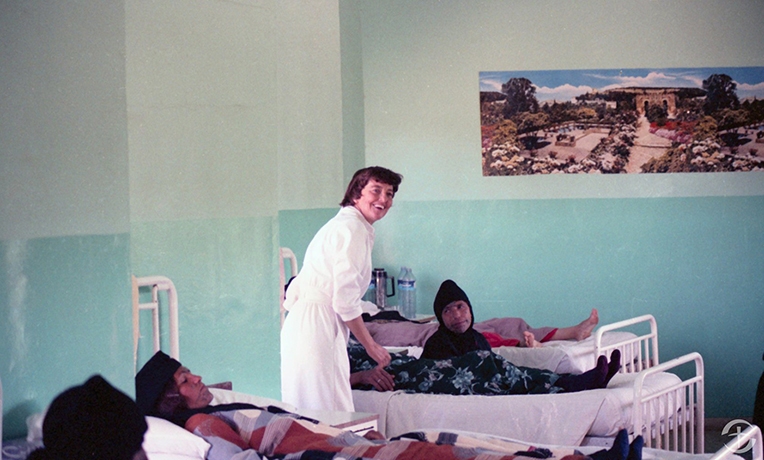 Meanwhile, Franklin was still struggling with what the Gospel meant to him personally. In the summer of 1974, Billy Graham challenged Franklin and said, “You’re going to have to accept Christ or reject him. You can’t continue to play the middle ground. Either you are going to choose to follow and obey Him, or reject Him.” Three weeks later, during a trip to Israel, Franklin knelt in prayer, asked Jesus Christ to forgive his sins, and invited Him into his heart as his Lord and Saviour.

Franklin Graham and Aileen Coleman with a patient at Annoor Sanatorium in Mafraq, Jordan.