Responding to the South Asia Tsunami

2004-2005: Samaritan’s Purse meets critical needs in the aftermath of one of the deadliest natural disasters ever recorded.

Samaritan’s Purse mounted a massive response after a deadly tsunami swept across the Indian Ocean the day after Christmas 2004. A magnitude 9.1 earthquake off the Sumatra coast in Indonesia triggered the tsunami that killed more than 230,000 people across 14 countries. 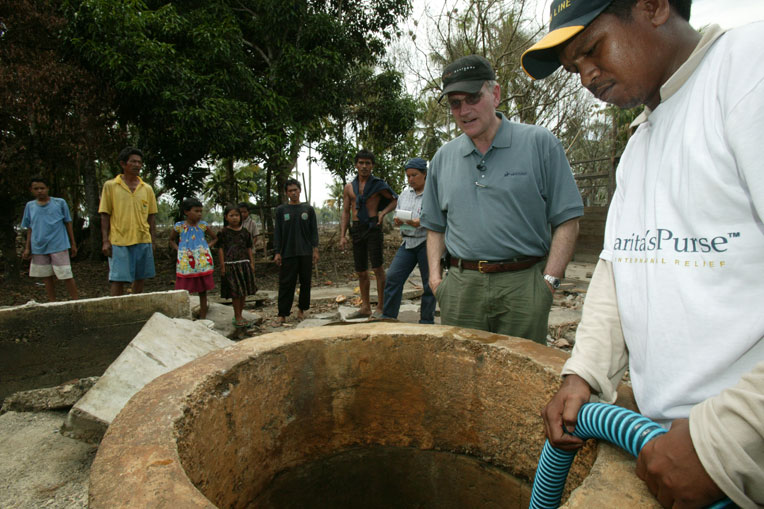 Our teams worked to provide clean water access to people in desperate need.

Our teams deployed to the hardest-hit countries of Indonesia, Sri Lanka, and India to provide emergency relief to people who had lost everything. Throughout 2005, we ministered to more than half a million people in these three countries.

In the immediate aftermath, Samaritan’s Purse chartered a 747 jumbo jet and airlifted tons of critical equipment and supplies such as shelter materials, blankets, and cooking supplies. We provided families with emergency food, water purification packets, and mosquito nets to help prevent malaria.

Our long-term relief efforts included building homes for more than 4,000 families in Indonesia and Sri Lanka, as well as a school and two community health centres for impoverished villages in Indonesia. We also replaced or outfitted more than 900 fishing boats in India, Indonesia, and Sri Lanka and re-established dozens of fisheries and rubber tree farms. Our vocational training programs taught women skills such as sewing, cooking, and handicrafts.

We also operated a water-filtering plant in Sri Lanka that served more than 15,000 people, and cleaned wells in Indonesia that benefited 20,000 people.

Aviation proved essential during this response. Samaritan’s Purse flew a Caravan cargo plane to South Asia and also shipped a helicopter aboard the chartered 747, and these aircraft allowed our pilots to make thousands of flights to isolated communities needing emergency aid and medical assistance. When an aftershock devastated the Indonesian island of Nias, and the island’s only hospital was destroyed, our helicopter evacuated hundreds of injured people to a hospital on the mainland.

Through all these efforts, God provided opportunities for our teams to demonstrate His love to suffering people throughout the Indian Ocean islands.