YOU HAVE (0) ITEM(S) IN YOUR CART. CHECKOUT NOW
Operation Christmas Child
Shoeboxes for refugees 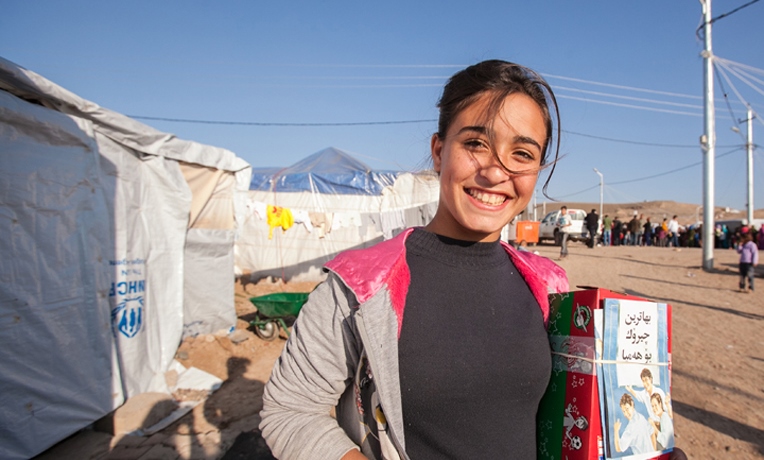 Syrian children who have experienced the terror of war receive joy when they open gifts sent from the U.S.

For the last two years, thousands of children displaced by ISIS militants have received a special Christmas gift.  Samaritan’s Purse has sent thousands of shoeboxes filled with toys, school supplies and hygiene items. These boxes were lovingly packed by people all over the United Kingdom, United States and Canada. This tangible demonstration of God’s love brings joy to children who have experienced so much sadness.

Alda is one of tens of thousands of Syrian children forced to flee their homeland because of an outbreak of violence and now living in a refugee camp in a country in the Middle East. As she explored the contents of her shoebox gift, a huge grin spread across her face. Tucked inside, she found a brand new skipping rope, and she quickly unfurled it and began to jump in the bright afternoon sun. Nearby, her sister Shahnaz, 3, hugged a stuffed animal and her brother, Delshad, 10, inspected a yo-yo and puzzle. 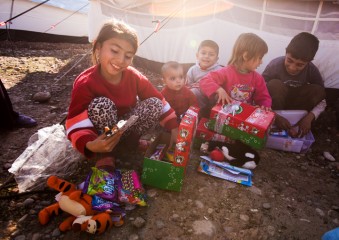 As Alda opened her box, all around the camp children could be found enjoying the contents of their boxes. Because of the unique situation, Operation Christmas Child distributed gift-filled shoeboxes to all children under 18 years old.

Heyat, 15, fled with her mother, three sisters, a brother with special needs, and a nephew. Her father and five other brothers are still in Syria, waiting for the border to open so they can join the family.

One day while they were still in Syria, an aircraft flew near their home and dropped a bomb.
“When I saw it, I was so scared because if the bomb fell on our house, it would all be destroyed,” said Heyat’s mother, Khokha. “Nobody would survive.”
“We heard the sound of the bombs,” Heyat said. “I saw people get shot and killed. I was so scared, and my mother was so scared, she decided to bring us out of there.”

As Heyat opened her box she began to smile. Several pairs of bright neon socks and sparkly bangles poked from the top of the box, nestled among soap, toothpaste, a bath sponge, and other toiletry items. Heyat’s shoebox was from an 18-year-old girl named Megan who had included a message sending her love. 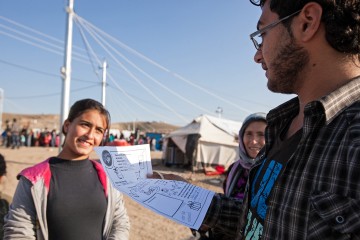 Mizgin, a translator, reads a letter from a girl named Megan that Heyat received in her box.

“Thank you very much” she said “I really appreciate those people who are thinking of us and taking care of us, sending things for us.”

Her mother was grateful as well.

“We are very happy because the people here are very poor and need the help,” Khokha said.

Heyat’s family hopes that their relatives in Syria will remain safe and that they will soon join the rest of the family in the camp. Ultimately, like many others in the camp, they hope to return to a peaceful Syria.

This year Operation Christmas Child aims to send thousands more shoeboxes to refugees in countries in the Middle East, Macedonia and Serbia and your shoebox could be one of them.

help a child like Heyat receive a shoebox this Christmas

HOW TO PACK A SHOEBOX