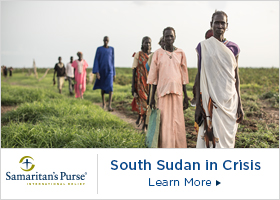 As tensions simmer in South Sudan following recent violence in the capital, Dr. Evan Atar knows all too well what it’s like to keep serving in tumultuous war-time conditions.

Dr. Atar is the only full-time surgeon in all of Maban County, located in the northeast part of his country. The soft-spoken, yet always-on-the-go physician oversees the multi-faceted operation at the area hospital, which is run by Samaritan’s Purse. He is a fully devoted follower of Jesus Christ and seeks to honor Him through his life and practice.

His schedule can be crushing, but Dr. Atar credits God for giving him and the dedicated hospital team an empathetic spirit and the stamina to keep serving in Jesus’ Name even when the difficulties and the long hours are overwhelming.

“We are the only ones here to help them and the only witness for Christ among these people,” he said. “Jesus gave His love to us, without asking anything in return. Here, we do just a little to help, but God is with us. We can’t do anything by ourselves.” 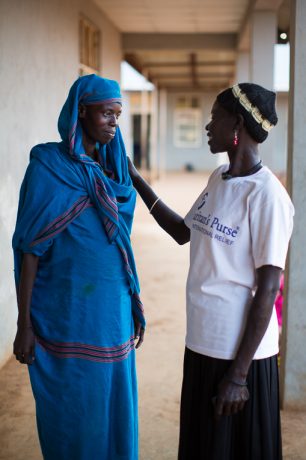 Staff members minister to refugees and others at the Samaritan’s Purse-run hospital in Maban County.

Over the years, Samaritan’s Purse has improved and expanded the Maban County Hospital, converting the primary healthcare facility into a full-service medical center. An operating theater was constructed, multiple wards were built, beds were added, and a pharmacy and a lab were installed and stocked. The latest expansion, completed in July 2014, has enabled the medical team to respond to simultaneous emergencies, has improved diagnostic testing, improved sanitation, and helped with overcrowding—though the 120 beds still are not enough to accommodate the burgeoning caseloads. There is still need for a major tuberculosis ward to help combat this deadly disease.

“I’m so thankful to God that Samaritan’s Purse has been able to make these expansions possible,” Dr. Atar said. “At first when I came, we had to do surgeries under the trees. I’m grateful these buildings are now here, and we’re able to do all the extra procedures that we couldn’t do before, including life-saving C-sections in our new maternity ward.”

Not only is the hospital ministering to the physical needs of people, staff are reaching patients spiritually. Local pastors are serving as chaplains and are compassionately sharing the Good News of Jesus Christ. Many have received Him as Savior.

“I like to help those who need Jesus,” said Pastor Andrea Aja. He visits patients five days a week. “I pray with them and encourage them in the Word of God, and I’ve seen them, once well, in the refugee camps singing praises to God.

“God’s love encourages us to help others to know Him and to love others as He has loved us,” he added.

Pastor Aja said many patients come in scared and then their optimism of getting better fades as their illness lingers. One 29-year-old woman in particular stopped taking her TB medication as she lost all hope of being able to go home. 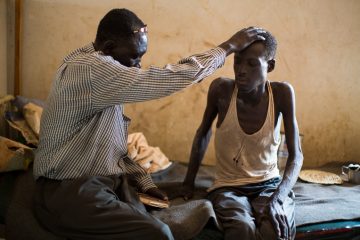 “I talked with her a long time and finally was able to convince her the medication was good for her and would kill the disease,” he explained. “She changed her mind and started taking her medicine again. I kept talking with her and praying with her and encouraged her, and God touched her life and she became well. The day she was released she told me, ‘Thank you for your help, if it was not for you, I would have died.” The two rejoiced and thanked God together.

“I remember another woman who was critically ill and was sick for two years here,” Pastor Aja said. He talked with her a lot about Jesus and how He is the Great Physician and that He is ever present in times of great need. “The woman saw her need and finally gave her life to Christ, and she did get well. As she was leaving, she said that she will no longer be alone but that the Lord will always be with her and give her the power to live for Him for as long as she lives.”

Dr. Atar voices his praise that the Maban County Hospital has remained open, despite the intense dangers the ongoing armed civil conflict present. Six other hospitals in the region have closed. 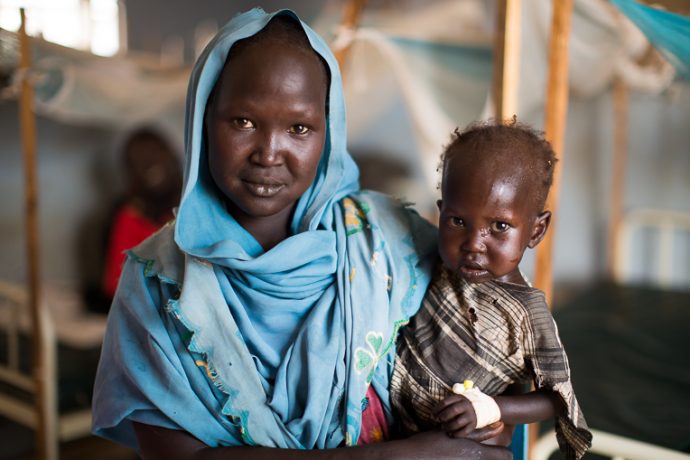 Maban County Hospital is the only medical facility offering surgical care in the state.

“Warring parties were not respecting the hospitals,” he explained. “Doctors were chased from hospitals, and some were killed. The challenge is where will these hospitals get their doctors, because the risks are so high. Unless there is complete peace, most won’t go there. By God’s grace, we will not run.”

A History Steeped In Conflict

Dr. Atar can still recall the nerve-racking days of Maban County Hospital’s beginning as if they were yesterday. In fact, its history is steeped in conflict.

Sudan was being ripped apart by a heated decades-long civil war between Sudan’s mostly Arab population in the north and the mostly black African population in the south. Dr. Atar had been well-known and respected for his compassionate care of those in need. Then serving in the Samaritan’s Purse hospital in Kurmuk, Sudan, he not only operated on civilians but also soldiers with the Sudanese People’s Liberation Army, who were intent on overthrowing the government in Khartoum. That landed him in trouble and made him, and the hospital, a target for attacks by northern Sudanese soldiers. 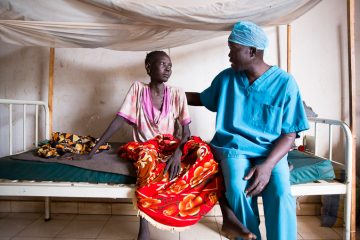 Dr. Evan Atar speaks with a patient at the Maban County Hospital in South Sudan.

Government troops in Sudan bombed and burned villages in the Nuba Mountains, killing thousands of unarmed civilians, including women and children, in an effort to force the non-Arab Nubans from their lands and seize control of disputed border regions. Directed from Khartoum, Sudan military leaders bombed the area around Kurmuk Hospital so regularly and aggressively that Samaritan’s Purse decided to relocate the medical personnel and equipment to the Doro Refugee Camp—less than 20 miles below the border in the town of Bunj in Maban County. The region is home to about 210,000 people, including 140,000 refugees spread out over four camps.

Dr. Atar felt compelled to remain behind, helping for as long as he could. When the situation became unbearable, he too fled for safety. He piled the remaining hospital equipment into four tractors and led a convoy during the height of rainy season. They slogged their way through muddy, rutted roads. “The tractors got stuck at times, so we had to sleep and wait until it was a bit dry and then we could pull out again,” Dr. Atar said.

“My life is not in my hands, but in the hands of God.”

Samaritan’s Purse set up shop in an abandoned clinic adjacent to the Doro Camp. It was enough to get going and to begin ministering to the wounded, sick, and injured from among the refugees and the host community. We immediately began providing food, shelter, clean water, and healthcare.