People walked into the Ebola Treatment Unit and didn’t come out. Those unfortunate enough to enter its doors saw fellow patients beside them writhe in pain before dying. The deceased were then zipped into plastic body bags by people covered head-to-foot in personal protection equipment.

But one summer day in 2014, after Ebola had spread throughout Liberia, one man—Harrison Sakela—did survive. He contracted the virus after attending his mother’s funeral in neighboring Sierra Leone, and, despite the fear that many people had about the unit, he went to receive treatment. Around him, 32 people died. But he lived. 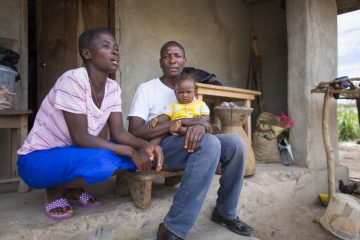 Harrison Sakela, the first Ebola survivor in Liberia, sits outside his home with his wife and young daughter.

“I was not fearful,” Harrison said. “I was looking up to God.”

After this first survivor, others followed. There is no cure for Ebola, but proper care in the unit decreased the mortality rate from 90 percent to as low as 30 percent. Yet the fight was far from over.

It was nearly a year later, in May 2015, when Liberia was first declared Ebola-free. By then, more than 4,800 Liberians had died from the disease. The entire country had been affected, and those who survived faced lasting consequences.

In the aftermath, Samaritan’s Purse has created a program for Ebola survivors. Many hospitals and healthcare facilities refused to treat Ebola survivors. Much about the disease is still unknown, and the unknown often breeds fear. Because survivors often have lasting health issues from Ebola, including eye problems, joint pain, headaches, and organ failure, Samaritan’s Purse has opened survivors’ clinics in Monrovia, the nation’s capital, and Lofa County, the epicenter of the outbreak.

The survivors also receive counseling, both at the clinic and at their homes, and are able to participate in a second tier of the program where they learn vocational skills to help them financially. 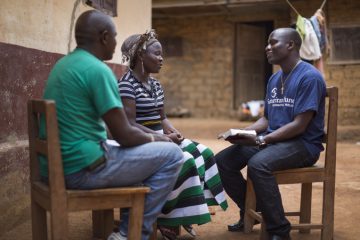 Darlington Jallah, a health coordinator for Samaritan’s Purse, sits with Jenneh Gbembo, an Ebola survivor, at her home in Lofa County. Darlington encourages Jenneh with verses from the Bible.

At the clinic in Monrovia, Nancy Writebol, the Ebola survivor from Charlotte, North Carolina, sits with patients in a small room of ELWA Hospital. Many of these patients come with questions about how Ebola may affect their pregnancies or which medications they can take to help with headaches. Doctors at the clinic answer these questions, but Nancy focuses on the spiritual rather than the physical.

“If we don’t share Jesus Christ with our patients, we haven’t given them anything,” she said. “We can give them medical care, and we can give them hope with maybe some livelihood business skills through Samaritan’s Purse, but unless we give them Jesus, we give them nothing. Our call is to share Christ.”

She gently does this through each question she answers, and she often shares her own story of survival with the patients as well for encouragement.

In Lofa County, Harrison and other survivors still visit the Samaritan’s Purse survivors’ clinic regularly. One woman, Esther Fayieh, comes to the clinic for pain medication. Because of Ebola, she has lost hearing in her left ear and has lasting joint pain in her leg. The medicine helps to take away the physical pain, but it’s the counseling she receives from the doctors that takes away the pain of losing all seven of her family members. 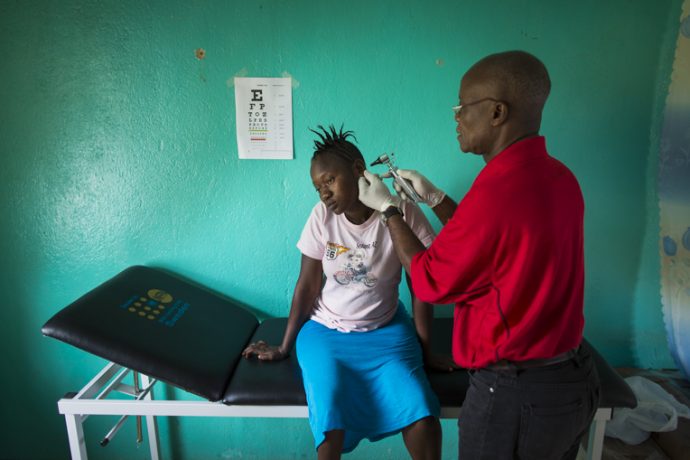 Esther Fayieh receives a check up at the survivors’ clinic in Lofa County, Liberia.

“Before I encountered the virus, I had a lovely family,” she said. “But all of my family died. I was very discouraged about life. But for now, they counsel me and talk to me, so I feel very fine even though I lost all of my family.”

Since contracting Ebola, Esther has been caring for her sisters’ five children. Harrison has gotten married and had a daughter. Their families are growing again, but they have found difficulties in supporting them.

During the Ebola crisis, many workers were told to stay home or lost their jobs, and survivors were especially targeted. Markets and schools were forced to close, and, at one point, the World Bank reported that half of Liberia’s workforce was unemployed. After the crisis ended, when conditions began returning to normal, survivors found that they still didn’t have options.

To help people support themselves, Samaritan’s Purse began training survivors in new vocations that they’re interested in. The most common are soap making, tie-dye, tailoring, computer science, driving, and hairdressing.

“Tomorrow, I will be able to stand on my own,” said Naomie Johnny, a beneficiary who is learning how to make soap and tie-dye. “When I’m selling soap, I can make money on my own.” 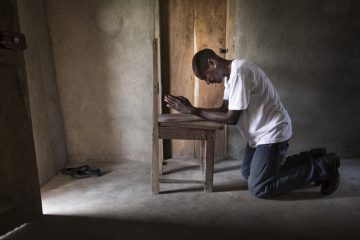 Harrison prays inside his home in Lofa County, Liberia. His house is located a short walk from the Ebola Treatment Unit.

When Harrison first left the Ebola Treatment Unit, he began working for Samaritan’s Purse as a security guard. Since then, he has learned how to be a beekeeper and currently has two hives of his own. He says he loves being an apiarist and uses the honey as medicine.

Esther has signed up for computer classes and hopes to start soon. Her dream is to work in an office and to support herself and the children in her care.

Through this program, survivors have two opportunities to hear the Word of God. They first receive Biblical encouragement at the survivors’ clinic, and, once they sign up for vocational training, they hear the Word again from their instructors. The lessons have especially encouraged Naomie, who moved to a new neighborhood so that no one would know her status.

“There was a lot of stigma, but Samaritan’s Purse encourages you and makes you feel like an important person in society,” she said. “By the grace of God, I lived.”

More than 200 survivors have enrolled in our program since it began. Each week the clinic receives new patients. Samaritan’s Purse staff members have visited more than 80 of these patients at their homes, and 136 people have received vocational training. Please pray for these survivors as they start fresh with new skills to support themselves.