The Light of Hope Breaking Through to Storm-Stricken Lives

God continues to work in northern Honduras as Samaritan’s Purse provides physical and spiritual care to a storm-weary country.

For more than a month now Samaritan’s Purse disaster relief and medical teams have been working in communities wrecked by devastation in and around San Pedro Sula, Honduras. The back-to-back Category 4 storms Eta and Iota made landfall in early November, triggering landslides and catastrophic flooding that displaced hundreds of thousands of families.

In addition to providing more than a thousand hygiene kits to residents and shelter materials for more than 170 hurting Honduran families, we’ve helped re-establish lifesaving access to clean drinking water, providing some 200,000 liters so far through the installation of water treatment systems.

And our medical teams have also been hard at work through our Emergency Field Hospital (EFH) and mobile medical units. Since November 15 we’ve been helping to support the area’s crippled healthcare infrastructure, whose hospitals were left flooded or inaccessible by the storms. Honduran Minister of Health Alba Flores said after the storms the area’s “entire health system is broken.”

We praise God that Samaritan’s Purse medical teams have been able to treat more than 1,700 patients at our EFH and that an additional 460 individuals have received care through our mobile medical team traveling to communities isolated by floodwaters. We’ve also seen God work in the hearts of many hurting people.

One patient we met, Israel, described the immense power as Hurricane Eta came ashore Nov. 4, carrying torrential rains and quickly flooding his community. The storm left little time to flee. “The water levels rose too quickly to the ceiling of the house and we lost everything,” Israel said. 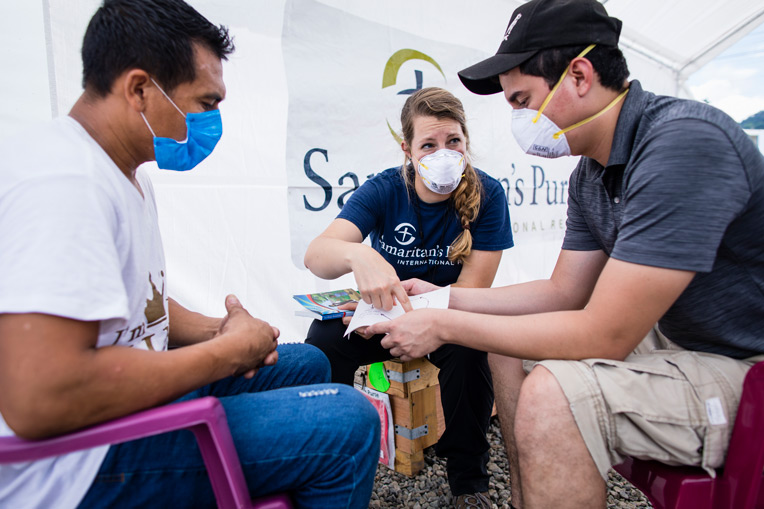 Israel and his sons evacuated their home with just the clothes on their backs, fighting the strong current that made roads look like canals. They created a makeshift shelter and lived on the streets—at least until the rain and floods came back when Hurricane Iota struck weeks later. Iota destroyed even the little they had left.

Israel was already struggling to make sense of all he had been through and to find peace in the aftermath of life storms.

Earlier in the year he’d lost his job as the coronavirus pandemic crippled local businesses. Israel was already under the burdens of anxiety and symptoms of Post Traumatic Stress, which he associates with watching helplessly five years ago as his brother was murdered. For years he’s grieved this while fearing for his own life.

The recent hurricanes and uncertainty further heightened Israel’s anxiety and he began to crumble under the load.

As episodes with Post Traumatic Stress continued to inhibit sleep and forced him to distance himself from family, Israel arrived at our EFH in desperation. He hoped we could give him the help he needed to combat the darkness he was experiencing.

“Many of these patients have had one bad thing after another happen to them, and their stress and anxiety levels are just going up. Without ever being cared for, that can cause some pretty serious mental problems,” Samaritan’s Purse member care chaplain Kristen Studdard said. 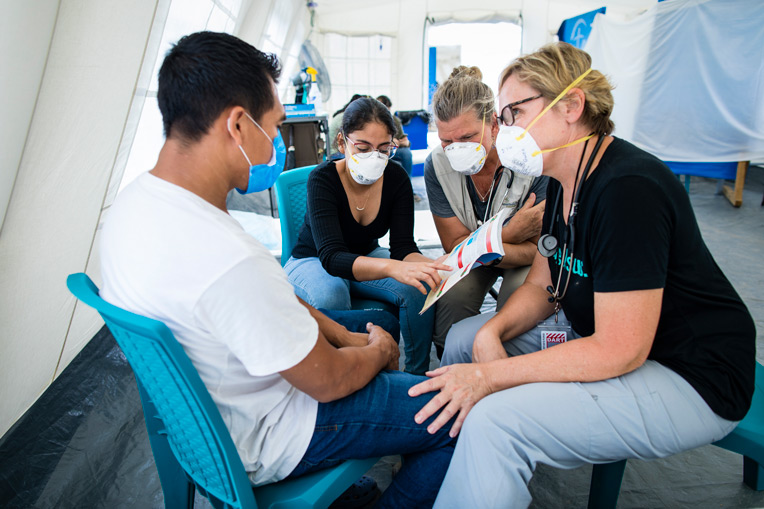 Physicians Assistant Gwen Miller and Nurse Kathy Mazzella share the Gospel through a translator with Israel at our Emergency Field Hospital.

As our medical teams provide physical care to patients like Israel, it gives us an opportunity to address their deeper need for true, eternal, hope. “If I can show them that God can give them peace, that’s a huge thing,” Kristen said.

Doctors and nurses sat with Israel, hearing more of his story and the incredible difficulties he has faced. They presented the Gospel to him, sharing with him about the peace that comes from a relationship with Jesus Christ. That day he experienced that hope and peace, like sunlight breaking through a dark storm. He received Jesus Christ as his Lord and Savior.

“Right now, in this difficult moment, I forgot about God,” Israel said. “But coming here and hearing about God and His salvation—I finally feel at peace.”

Israel left our hospital with new hope and a Bible translated into his heart language to continue growing in his relationship with the Lord.

Please continue to pray for families like Israel’s who have lost everything in these storms. Pray also for our teams in Honduras as they help meet the physical, emotional, and spiritual needs of families in the wake of hurricanes Eta and Iota.