Pille – the first time I heard about Jesus

I was born and raised in Estonia until the age of 11. I lived with my parents and five other siblings in a two bedroom house. My dad always used to say that ‘even though we were poor in money, it doesn’t matter, because we are rich in children.’ Our home was in the remote countryside with forest all around us and the nearest neighbours to us were almost a mile away. The nearest town was 20 miles – this was where my dad worked and where we went to school. As a young child I didn’t necessarily notice a lack of money my family had. We always had a enough food and the way we were living was all I had ever known. But looking back I know that things were difficult for my parents. For example we didn’t have a shower or running water in the house until I was around eight years old and our house didn’t have insulation or central heating. This was difficult as during the winters in Estonia temperatures can drop well below freezing. I remember my mum spending hours just bringing in logs to keep the wood burners going.

Our way of life was very normal for most families who lived out in the country, and even though the families in towns had slightly more, life for them was still basic and we lived with the effects of a post Soviet Union country. But there were also and still are many families who had a lot less than we did.

I don’t have many memories that stand out from when I was around the age of five. I can’t even really remember the Christmases at our own home. But I do vividly remember the day we received our shoeboxes. As a child I used to play that wonderful day over and over in my mind. It had been organised by a local church in a building that they were renting. When I go back to visit Estonia I still drive past there on my way to town. A whole day of events had been arranged. They showed us a video, and sang songs with us. When I moved to England and heard ‘Who’s the King of the Jungle?’ sung for the first time, it sounded so familiar and I realised it was the song we sang on the shoebox day, including all the actions; we just sang it in Estonian.

We had been told that we were getting parcels from America and I remember lining up with all the other kids. In my mind at the time it felt like there were thousands and thousands of us, but in hindsight, I think there were many, but not quite a thousand. The excitment from all the children was amazing as they waited in anticipation to see what gifts were inside their shoeboxes.

I can still very clearly remember the smell that came with opening the shoebox, it’s now a smell that is forever known in my mind as the ‘Smell of America’.  The things I remember having in my box were a colouring book, pens, pencils and toys. Also inside was a photo of the family who the box had come from and that made me really feel special, to see the family who had sent this gift for me. I treasured that photo. 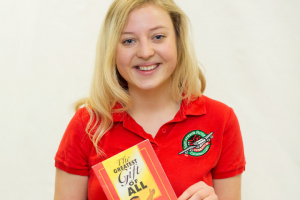 Pille with an older style copy of ‘The Greatest Gift’, as she remembers it 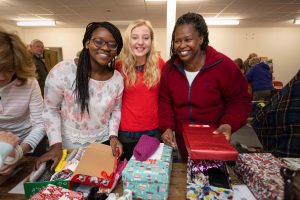 Another gift that I received that day was a small booklet called ‘The Greatest Gift’. I’m not even sure I could read at the time but I did understand that the story in it was something to do with God and a character called Jesus and some people called Adam and Eve. At the time I didn’t really pay too much attention to it, I thought it was just a made up story. No one in my family was a Christian and although the Soviet Union had fallen we were all still taught and followed the ideas of it, therefore the idea of God was naive and we thought that the world began and ended with humans.

Some years later my older sister became a Christian, and she began to tell me about Jesus and the Bible and that it wasn’t made up stories but that Jesus loves each and every one of us, even me. In 2010 I accepted Jesus as my Saviour, He changed my mind and my heart.

The other thing that God has really shown me through receiving a shoebox is that He was already reaching out to me years before I knew and accepted Him. This for me is so important, because the biggest thing I’ve had to learn is that I do not have to strive for His love or earn it. And knowing that He was already pursuing me back then, shows me that He is the one who has loved me first and been with me even if I didn’t realise it. I just have to say yes.

I know that when we send these boxes, sometimes it’s very hard to imagine an actual child across the globe receiving it and  their reaction and how, or even if,  they will be impacted. So I really hope that hearing a little of the transformation God has done in my life encourages you to know with more certainty that God will use the boxes you pack and send to touch the hearts of every single child that receives one and that all of your prayers for these children will play a significant role in sharing the name of Jesus to all the corners of the world.