For neighbours fleeing crisis, Samaritan’s Purse offers hot meals and a warm place to stay in the mountains of Colombia.

Hundreds and even thousands of Venezuelan migrants cross into Colombia each day, leaving behind chaos and deprivation. They’re hoping to find safety and economic opportunity in their neighbour nation or other countries farther south, such as Ecuador and Peru. But the journey is demanding, dangerous, and filled with uncertainty. 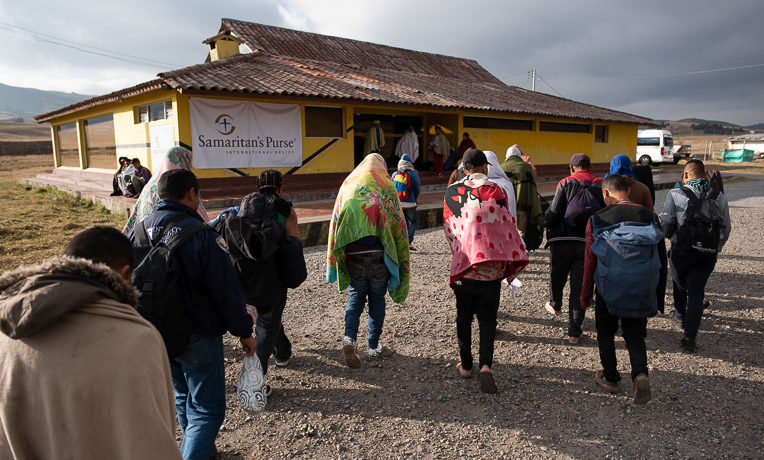 Who knows how they’ll handle the elements—wind, rain, sun, even snow? Where will they stay and what will they eat in Colombia? Will they be cheated or exploited? How will their bodies fare after days of walking uphill?

Because of these potential hardships, some migrants are leaving family members behind—mostly the young and old. They hope to find jobs and send back money to their relatives.

Eventually, many hope to reunite once they’ve established a new life in a new land. Or, perhaps, they will return home when Venezuela finally recovers from the current social crisis.

Samaritan’s Purse has two shelters for los caminantes, or walkers, in Colombia: one not far from the border outside Cucuta and one high in the Andes in a town called Berlin. Typically, hundreds of walkers are coming through each day. 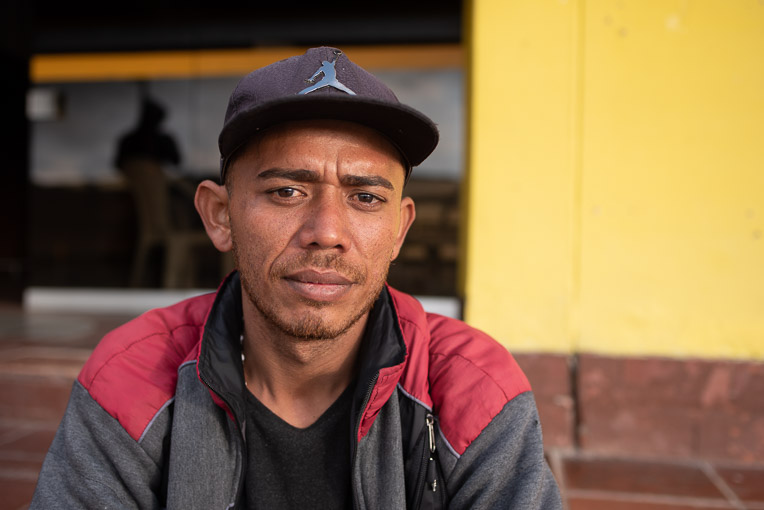 Alcides is one of tens of thousands of Venezuelans who have passed through our shelters in Colombia.

Alcides, 29, was one of many men travelling the migrant trail in Colombia this winter and spring. He left behind his mother, his wife, and their children (1 and 4 years old) in Venezuela, hoping to find a way to support them. He stopped by our shelter in Berlin over two cold days of late February/early March.

“My baby has malnutrition. They’re eating yucca (a starch) every day,” he said. “My children told me send something so we can eat chicken. That makes me so sad.”

Alcides did construction in Venezuela, and his earnings weren’t nearly enough to put food on the table regularly. Nappies were unaffordable.

“It was difficult to leave my country because I was born there,” he said. “My family’s there. My home’s there, but I had to flee because of the need.”

Fighting for His Family

Alcides has 17 screws in his leg from a work accident back home. He walks with a slight limp, but he still presses on, trudging many hours a day with his 11 friends. He’s a little older than his companions—who look up to him—and they give him a helping hand as he tires each day. He’d been walking for ten days when he arrived in Berlin, heading south to the Colombian city of Buenaventura, a coastal destination that would probably take him an extra week or more to reach. 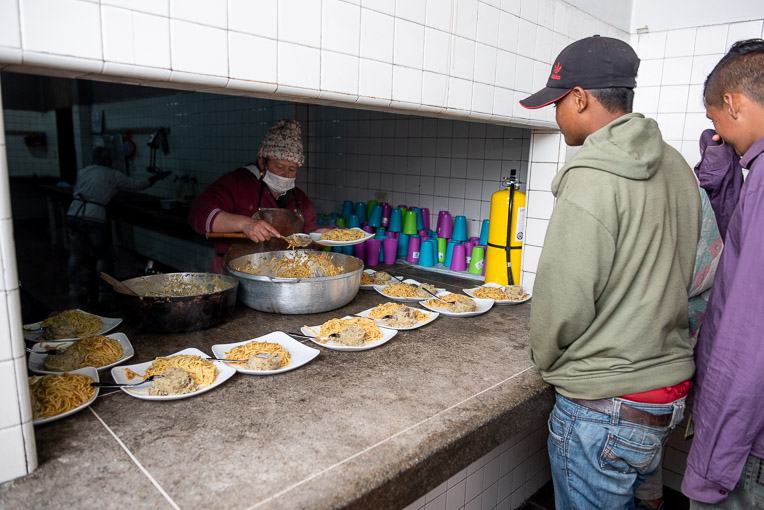 Hot meals are served throughout the day at our migrant shelter in Berlin.

“I’m here to fight for my family,” he said. “Fighting because it is a fight to walk this way. It’s hard and intense because we [usually] have to sleep on the street. My pain is in my feet, my back, my spine.

“A normal day of walking is going from shelter to shelter [there are several non-Samaritan’s Purse shelters along the route]. There’s not an easy day. We wake up at 5 a.m. and get to bed at 10 p.m.”

He was very relieved to find our Berlin shelter, the only one at the height of the plateau. Los caminantes often refer to the area as “the freezer”—it is over 11,000 feet above sea level—and there are rumours that several migrants have died of exposure.

“We’re very grateful to you [Samaritan’s Purse],” he said. “If you didn’t have this shelter, we’d be out in the elements.” 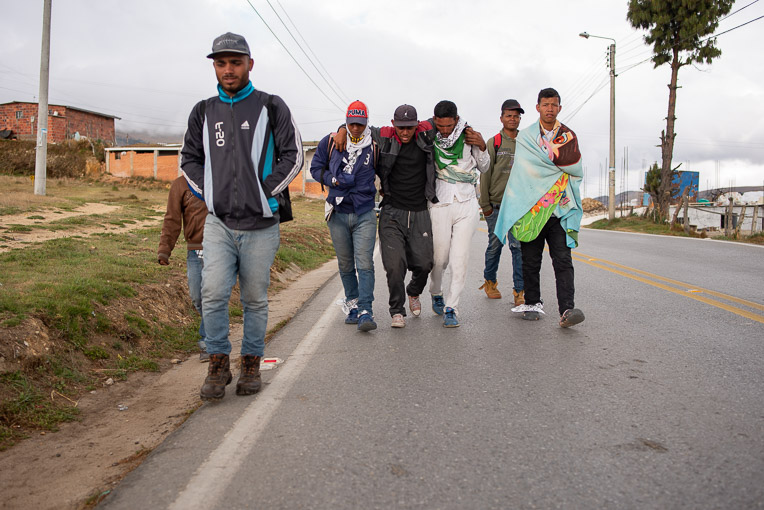 Alcides gets a little help from his friends after a grueling day of walking. 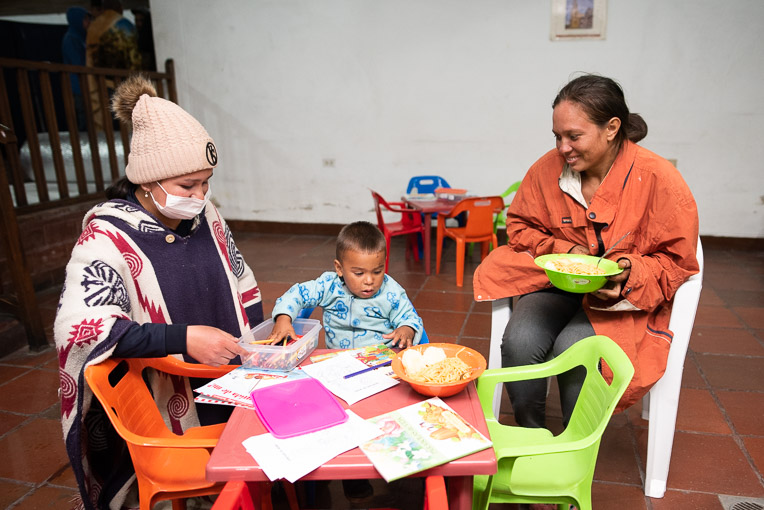 A Venezuelan mother (right) enjoys a meal with her young son at our shelter. 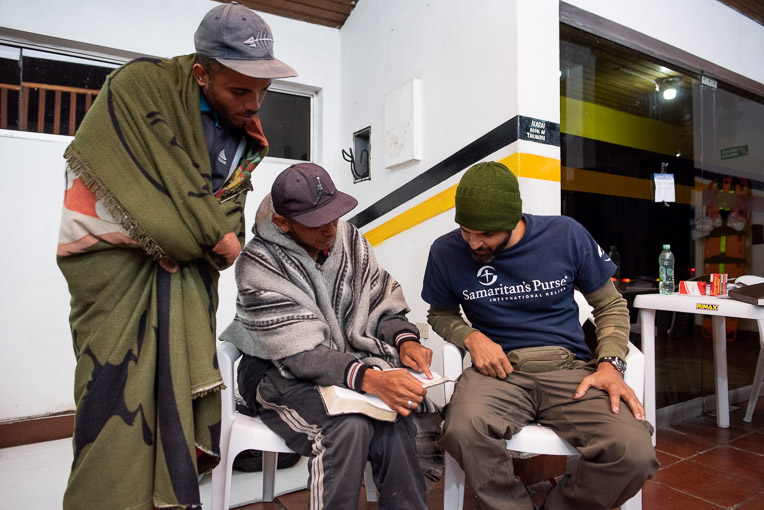 Alcides and a friend discuss the Bible with a Samaritan’s Purse staff member. 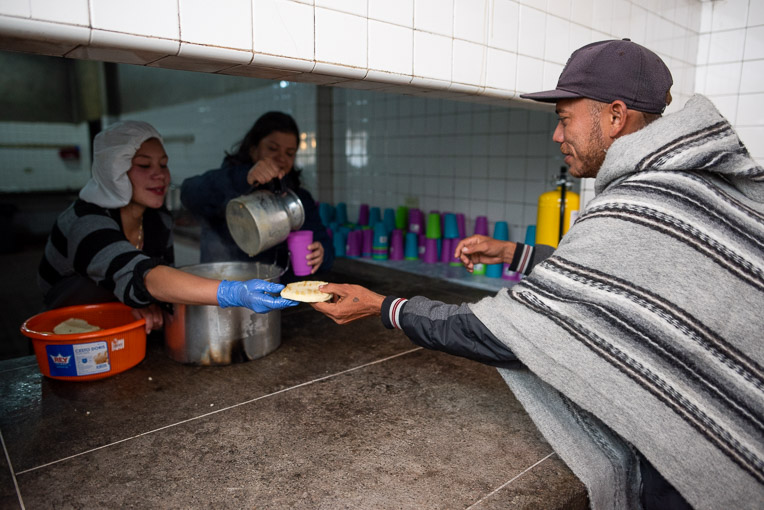 Alcides and his companions received breakfast after spending the night at our shelter in Berlin. 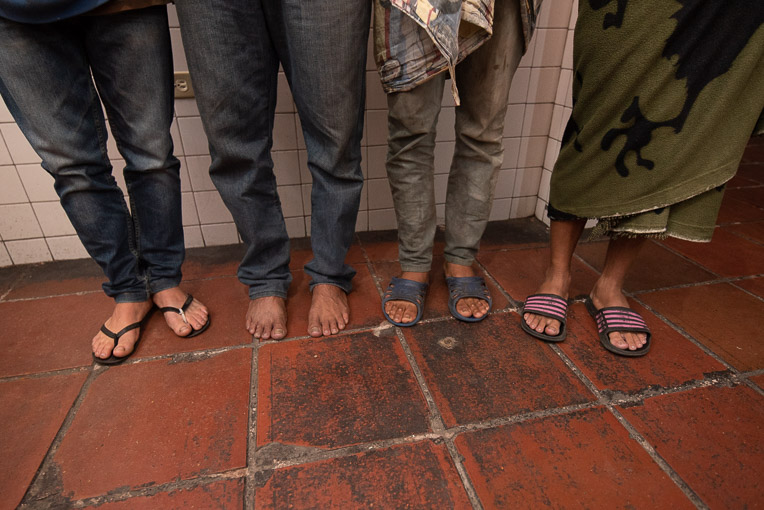 Some Venezuelan migrants are walking miles every day in flip-flops or bare feet. 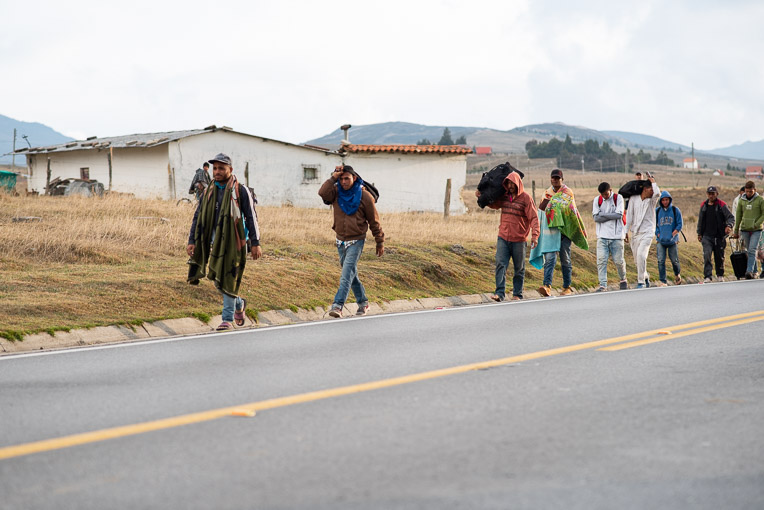 Walkers pass through the high plateau before descending to large cities such as Bogota and Cali.

“These moments we really need you, need your help right now. I hope that you keep helping us (Venezuelans) because it’s not only me who’s walking but thousands and thousands of others.”

After dinner at the shelter, Alcides listened intently as one of our staff members gave a brief message on Deuteronomy 8:11-18 and shared how God had helped him, a native of Puerto Rico, in the aftermath of Hurricane Maria.

Alcides said he clings to Matthew 6:26 (ESV)—“Look at the birds of the air: they neither sow nor reap nor gather into barns, and yet your heavenly Father feeds them. Are you not of more value than they?”—as he continues on his journey. He hoped to soon find work and send money to his family.

Cesar, 48, was also walking through Berlin when Alcides was there. Considering his native Venezuela, he said, “The irony is we’re supposed to be a rich country, but people are starving.”

He’s headed to another southern Colombia city, Cali, to seek employment; he worked as a security guard back home. 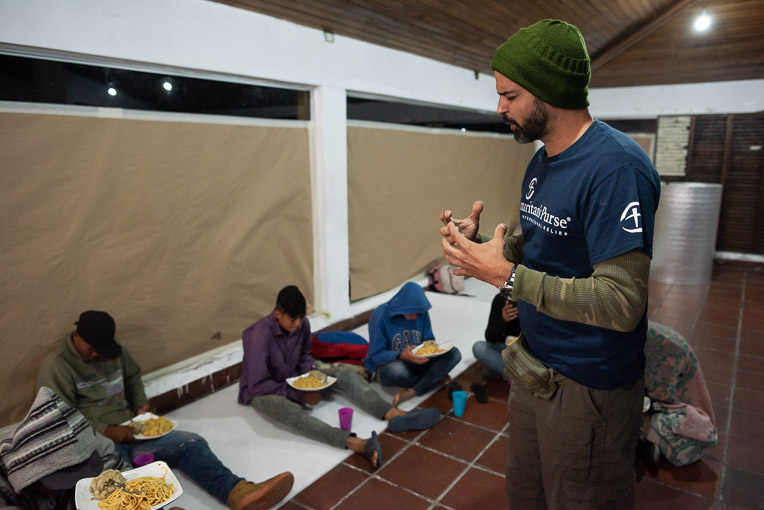 A Samaritan’s Purse staff member prays over the evening meal at our shelter.

“We haven’t got this type of attention at every shelter,” he said. “You treated us with more kindness…May God keep blessing you, so you can help other people who need it.”

Samaritan’s Purse staff in Colombia are committed to treating those fleeing Venezuela with dignity, respect, and love. These walkers appreciate that attitude, which opens up Gospel conversations.

“We are so grateful to be able to provide them shelter, a warm meal, and the hope of Jesus Christ,” said Susan Pineda, Colombia deputy country director.

“We’re able to speak truth to them and share the love of Christ.” 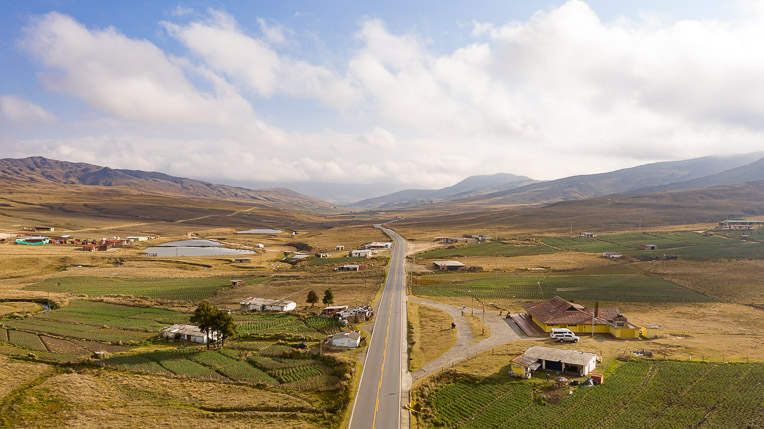 Berlin is a small town high in the Colombian mountains. The Samaritan’s Purse shelter there (yellow building at right) provides a warm, safe place for migrants to stay overnight.

—
In addition to our location in Berlin, Samaritan’s Purse has a shelter site in La Don Juana, less than 20 miles from the border city of Cucuta. You can read more about that site here.
When asked what makes our shelters different from others along the migrant route, Jose Tamara, our shelter coordinator in La Don Juana, said, “The way we receive and welcome them. They’re being treated as human beings with dignity. They’re being loved.”

Our Venezuelan refugee relief landing page has additional stories and information about how we’re serving displaced Venezuelans in various ways.

It’s important to note that the Samaritan’s Purse team in Colombia is composed primarily of Colombian Christians. We work closely with local evangelical congregations, so many of which are eager to help their neighbours in Jesus’ Name.