Samaritan’s Purse is helping to meet emergency needs created by the conflict in Nagorno-Karabakh.

For decades Armenia and Azerbaijan have battled over a portion of land known as Nagorno-Karabakh. In September, the conflict erupted again, and the two nations broke into a violent war. 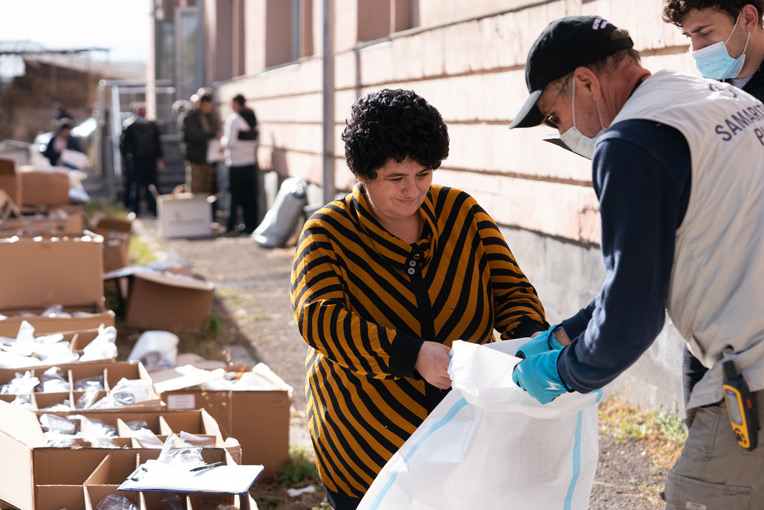 Nazely collects winter clothing items for her family at the Samaritan’s Purse distribution in Vardenis, Armenia.

The pocket of land, which is located within the borders of Azerbaijan, was home to ethnic Armenians. The war prompted people to flee—causing them to abandon their homes in the midst of shelling, gunfire, and bombs. Most took nothing with them. Approximately 100,000 of these ethnic Armenians have fled Azerbaijan for the neighbouring country of Armenia.

The war started in the summer months, and many left wearing sandals and lightweight clothing. With their lives on the line, there was no time to prepare. Now, it’s winter, and these vulnerable families—the majority of whom are women and children—do not have adequate supplies. Temperatures are below freezing with forecasts of snow expected during these already-harsh winter weeks.

Samaritan’s Purse is responding to the desperate situation in four critical ways: providing food, medical care, spiritual and psychological first aid, and emergency supplies—including coats, socks, gloves, blankets, and hygiene kits. Although a Russian-brokered ceasefire was signed on 9 November, it hasn’t changed the need. Tens of thousands of families left almost everything behind.

Nazely, whose family received warm winter clothing from Samaritan’s Purse, is used to war. She was just 13 years old when the war of 1988 began. Then later in the 1990s, her husband, a soldier, was killed defending Nagorno-Karabakh. She raised her four children in a conflict zone. 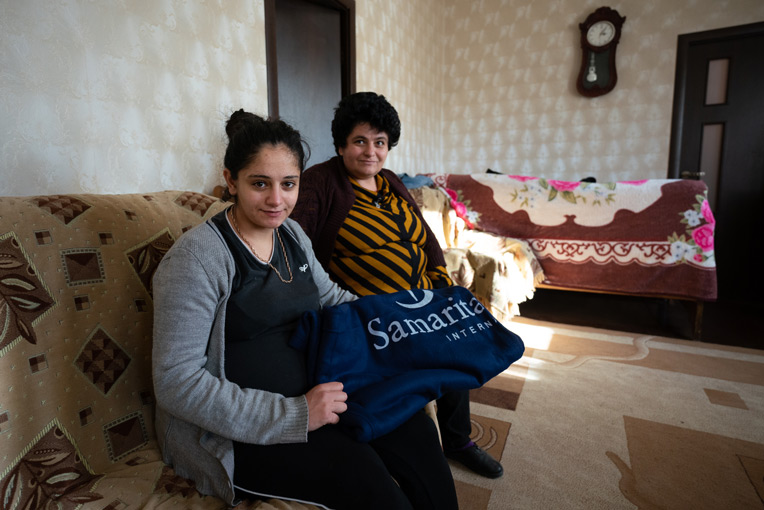 Lisa, left, and Nasely fled their home with little more than the clothes they were wearing. Blankets and other winter supplies will protect against the already-harsh winter months.

This year when the sounds of war returned, her family thought nothing of it. They expected it to be just a few days of gunfire before life would continue like normal. Within hours, Nazely realised this fight was different. It was too dangerous to stay. Her son went to battle and she fled, along with her mother-in-law and two teenage daughters who still lived at home.

As Nazely travelled with her family over the mountain range into Armenia, she saw young mothers and children terrified and crying. It reminded her of her oldest daughter Lisa, who is pregnant with her first grandchild and due any day.

Lisa also lived in Nagorno-Karabakh and had to flee. Through texts and phone calls, she knew that somewhere across the countryside her 19-year-old daughter was working to travel to safety. Lisa was travelling alone—pregnant and desperate to protect her unborn baby’s life. They made a plan to reunite in Armenia.

“I’ve been through this three times. I’m used to war,” Nazely said. “But as I saw little children, it was horrible. I was crying. I was suffering for them.”

Lisa soon met up with her mother and sisters in the border town of Vardenis. A distant relative who is currently out of the country offered to let them live in his house there. Still they are homesick for Nagorno-Karabakh.

Lisa said that the fear she felt while fleeing Nagorno-Karabakh was impossible to describe. “I was thinking only to save my life and my baby’s life,” she said.

Without Peace, Without Hope

When the war started, Lisa’s husband joined the army. Every man who was healthy and able volunteered to fight in the war. This means the families who’ve fled are made up almost entirely of women, children, and the elderly. 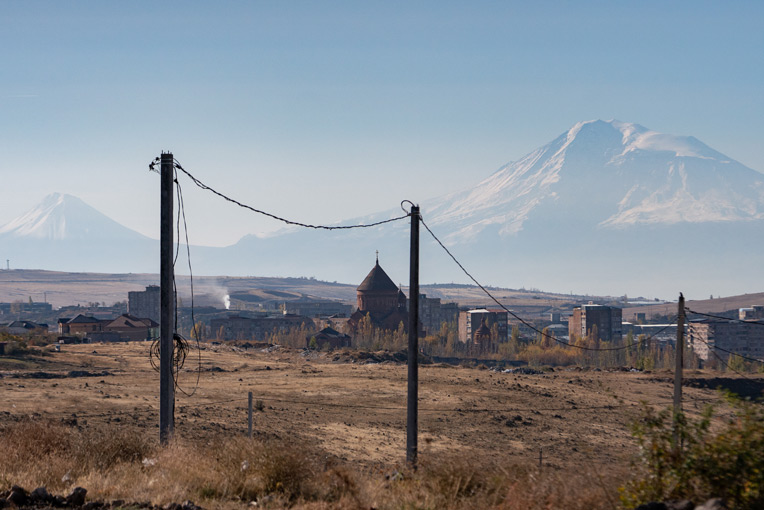 The region where we are providing relief is a place of Biblical proportions, in sight of Mount Ararat– named in Genesis as the resting place of Noah’s Ark

Receiving warm winter clothing from Samaritan’s Purse, including coats, boots, gloves and wool socks, was a tremendous blessing to their family. They escaped in only short-sleeved T-shirts.

“I am very thankful that you arrived here and are helping people. Even a jacket is a great help to me because we are lost,” Lisa said. “I am speechless. I have no words. Only thank you for your help.”

Paul Carr, a member of the Samaritan’s Purse Disaster Assistance Response Team said, “These families have just gone through so much trauma. Of course, the help we bring in terms of food, clothing, and medical care is great, but people need hope in this time—and we bring the hope of Jesus Christ. I want them to know that they are not alone. They have a loving God who is walking through this with them.” 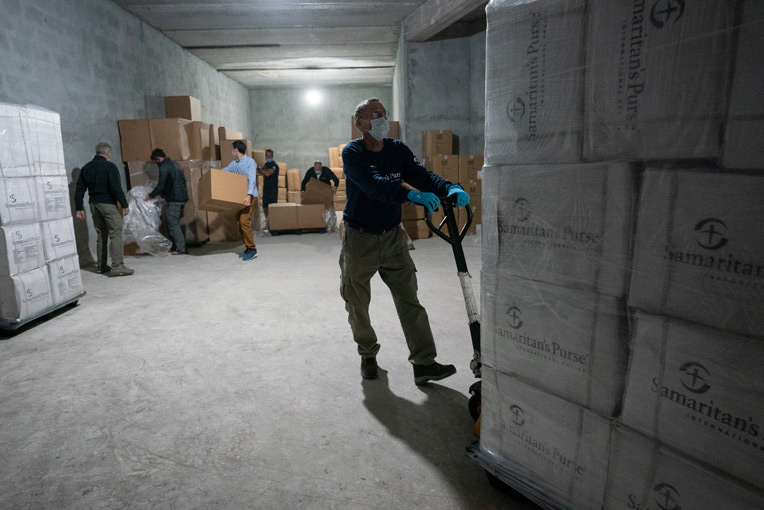 Please continue to pray as we provide supplies to people who have so little to face the harsh winter months already upon them.

Nazely and Lisa’s homes were destroyed in the war. They have nowhere to go, but Nazely said her family will continue to push forward. She smiles and laughs, saying that she has no choice but to keep living. She dreams of peace and a better life for her soon-to-be-born grandson, hoping that he won’t witness the trauma of war to which she and her own children have grown accustomed.

“I’m stunned that Samaritan’s Purse is here. I’ve never seen help like this before,” Nazely said as she thanked our team for the blankets and warm clothes.

Samaritan’s Purse continues to meet the desperate needs of vulnerable families who’ve had to leave their homes behind. We are working on both sides of the conflict, helping people in need in Armenia and Azerbaijan.

Our first airlift departed from the USA on 5 November and a second DC-8 cargo flight left North Carolina on Sunday, 15 November, carrying more than 12 tonnes of warm winter clothing, hygiene kits, and blankets. Already, more than 4,200 people have received emergency relief from Samaritan’s Purse, and our disaster response specialists continue to distribute supplies to the most vulnerable families. We also deployed a mobile medical team to provide primary care to those living in collective centres. From 14 – 28 November, 322 people received outpatient consultations from our healthcare professionals. 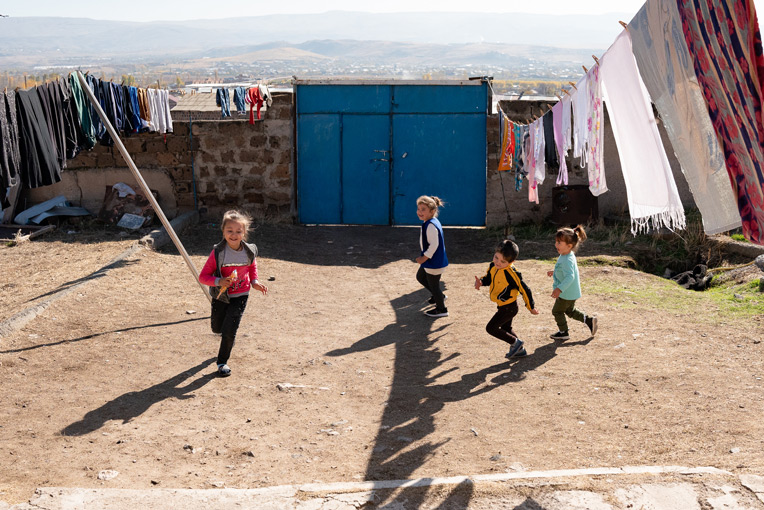 Children at play are a welcome reminder that there are still things to celebrate and enjoy. Please pray that these hurting people will experience the joy found in the truth of the Gospel.