Bob Pierce died on the 6th September 1978, aged 64. In October 1979, the board of Samaritan’s Purse elected 27-year-old Franklin Graham to take over as president and chairman of the board.

As leukemia took its toll on Bob Pierce, Franklin Graham asked him for his vision for the future of Samaritan’s Purse. “Let’s start with what is a good Samaritan,” Dr. Pierce said. “I want Samaritan’s Purse to be exactly what Jesus said it was to be. If we stick to the facts of that story Jesus told, we’ll keep on the right track. Who was that Samaritan? Likely a layman. The professional religionists, the priests, and the Levites, had taken a casual look at the wounded traveler—and gone on their way quite unaffected by his critical need of help. Then along came this Samaritan whom the religionists despised. He, too, looked and compassion welled up in him.

“Now did he look around for someplace he could take an offering to help the poor guy or to pay the innkeeper? No. Did he start a building fund for a hospital? No. What did he do? He jumped in to meet an existing need immediately, at whatever the cost. First, the man had to be moved. So the Samaritan set him upon his donkey, which meant that he, himself, had to walk, leading the donkey and holding up the injured man. This Samaritan inconvenienced himself. Not only that, but he committed himself financially. He paid the innkeeper what was the equivalent of a day’s wages for a skilled craftsman of his day. Also, there’s nothing about establishing a police force to do away with thieves and robbers on the Jericho road. He concentrated on the need at hand, got the man to where he could be helped.

“And he didn’t abandon him at that point, feeling, ‘Well, I’ve done all and more than could be expected for a stranger.’ He assured the innkeeper that he’d be back. ‘Keep track of your costs; I’ll take responsibility for this man,’ and he went on his way. That’s the story of a real good Samaritan.” 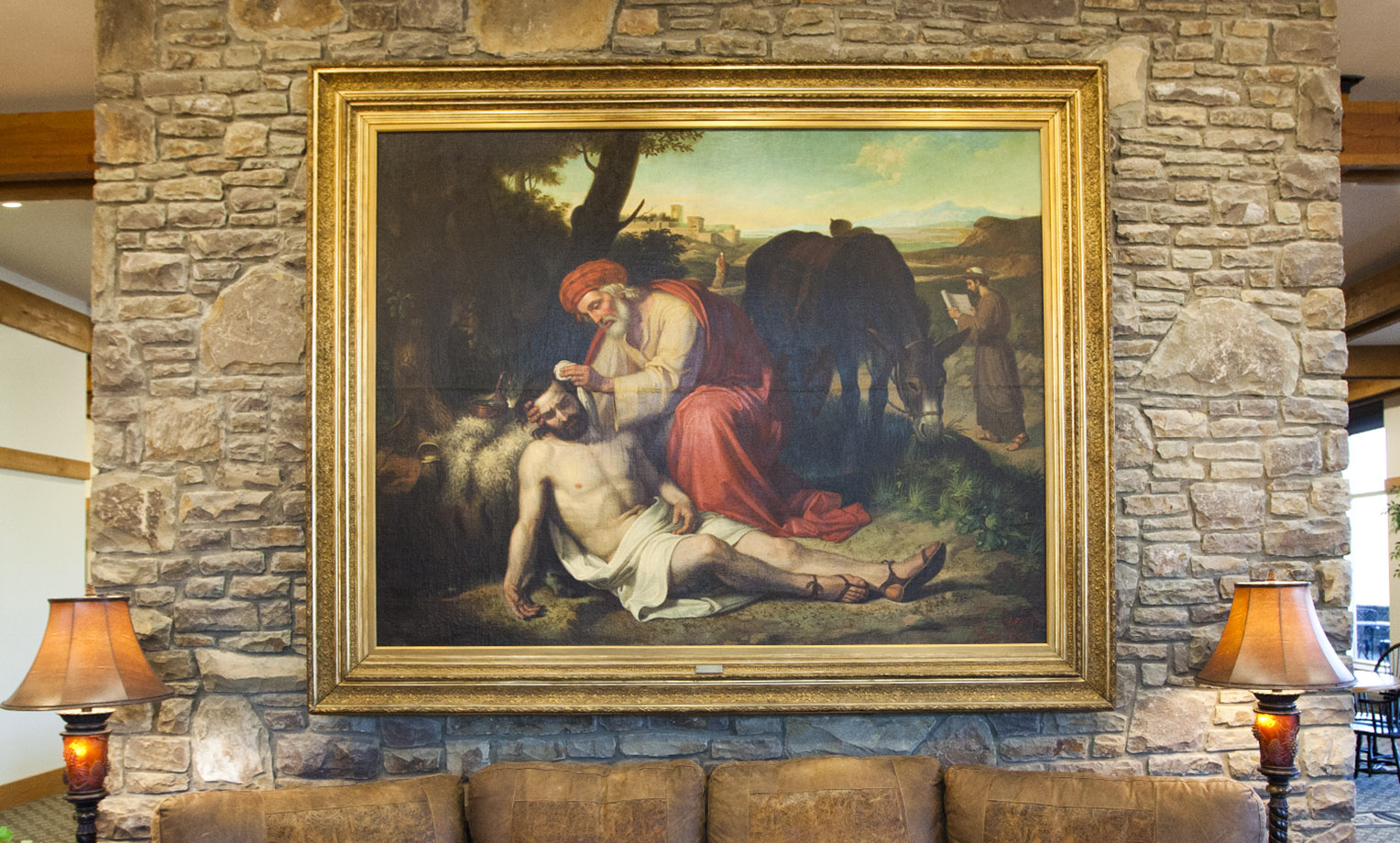 “La Caridad del Samaritano” literally translated, “The Charity of the Samaritan” is an oil painting by Spaniard Jose Tapiro y Baro (1863-1913) depicting the story of the Good Samaritan from Luke 10:30-37. A gift to Samaritan’s Purse in 2011 from the Gamboa Family Trust, the work of art is a reminder to all of Christ’s followers to “Go and do likewise.” This painting hangs at the entrance to the Furman Building at the ministry’s international headquarters in Boone.

In 1980, Samaritan’s Purse offices were relocated from Hollywood, California, to Boone, North Carolina. The original office was in the attic of the medical practice of Dick and Lowell Furman, the founders of World Medical Mission. Samaritan’s Purse opened our permanent headquarters on Bamboo Road in Boone in 1987.