A large Disaster Assistance Response Team, with more than 70 members including doctors, nurses, and other healthcare specialists, is on the ground working to help save lives. We are receiving COVID-19 patients from our partner in the city, Mount Sinai Health System.

“People are dying from the coronavirus, hospitals are out of beds, and the medical staff are overwhelmed,” said Franklin Graham, president of Samaritan’s Purse. “We are deploying our Emergency Field Hospital to New York to help carry this burden. This is what Samaritan’s Purse does—we respond in the middle of crises to help people in Jesus’ Name. Please pray for our teams and for everyone around the world affected by the virus.”

“This is what Samaritan’s Purse does—we respond in the middle of crises to help people in Jesus’ Name.”

In an eerily quiet New York City, Samaritan’s Purse has established our Emergency Field Hospital to help treat those suffering with coronavirus. We are ministering to the sick as the hands and feet of Jesus.

We have been running a similar medical facility outside of Milan, Italy, since 20th March. The 14-tent unit is set up adjacent to the Cremona Hospital in order to treat an overflow of coronavirus patients. Our DC-8 aircraft made two airlifts to Italy in order to deliver the hospital, 20 tons of supplies, and a large Disaster Assistance Response Team.

Dozens of disaster relief specialists, including doctors, nurses, and other medical personnel, will be serving in Jesus’ Name in both the United Sates and Italy to bring comfort and the hope of Christ to hurting people.

Our staff are working on the front lines in two of the worst affected areas in the world. New York City, the epicentre of the U.S. outbreak, has been staggered. Hundreds are dying daily in the city from the virus, and tens of thousands of cases have been reported across its five boroughs. As a nation, the United States now has the highest number of active COVID-19 cases in the world, with a total of nearly 200,000.

The city of Cremona, in northern Italy’s Lombardy region, is at the heart of the pandemic in Europe. The death toll across Italy is more than 12,000—the largest grim total for any nation in the world.

Cremona Hospital has been forced to suspend all medical care, except for maternity and paediatrics, due to the overwhelming numbers of people suffering from this terrible disease.

Our field hospital is set up in New York City's Central Park. 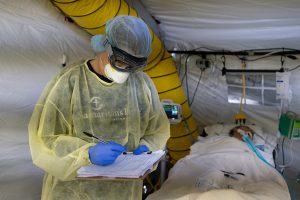 Whether airlifting our Emergency Field Hospital to Italy in the wake of COVID-19, or responding to earthquakes and armed conflict, Samaritan's Purse stands ready to respond in the face of a myriad of medical crises. Your gift will help bring expert treatment and the hope of the Gospel to the sick and suffering.