YOU HAVE (0) ITEM(S) IN YOUR CART. CHECKOUT NOW
Clean Water Healthy Lives
X 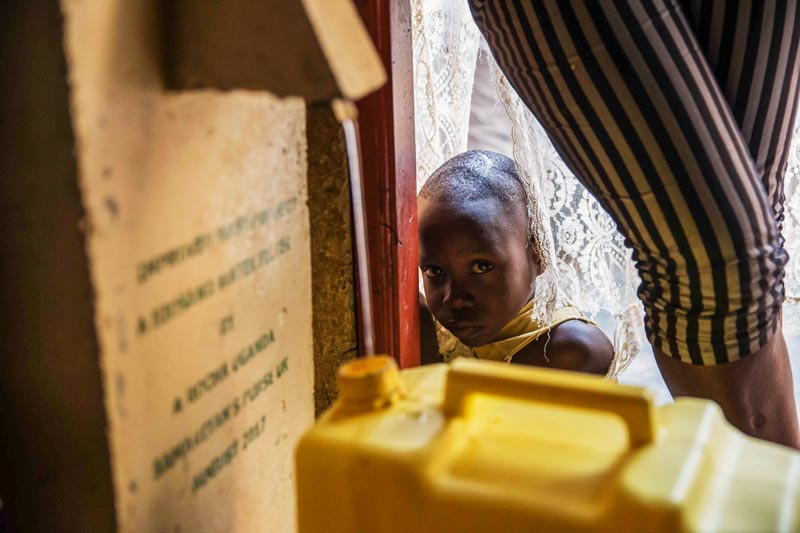 “I’m happy a filter can be in my home!” Harriette says proudly crouched by her concrete bio-sand water filter she received last year. “We use the filter every day. I can collect a jerry can of dirty water from our local water source, pour it in and I can get enough clean water for the day. My children can just come and use it for their water, there is no more illness in my home”

This hasn’t always been the case for Harriette’s life here in Lusaze, Kampala. “Before we got the water filter I would boil 10 litres of water and that would last us about 3 days. The charcoal would cost me 3,000 shillings [the best part of a day’s wages]. I would use it for cooking and then once the food was prepared, I would boil the water to make it safe to drink. When the children are on holiday there can be 12 of us in the house. Sometimes I can’t afford more charcoal and my children fall sick. Without proper treatment, the symptoms from typhoid or diarrhoea can last weeks, even months.”

I heard that the local church were training people in hygiene and sanitation (this is run with A Rocha, Samaritan’s Purse Partner) and that this could reduce the risk of illness. I decided to go along.

“I learned how to keep my home clean and how to dispose of rubbish, wash utensils and store food properly. I also learned how to wash my hands with the soap they had shown us to make. As the training was going on they asked if anyone would be interested in getting a BioSand water filter. Those who were interested then got the opportunity to go to Gayaza, north of Kampala, where we participated in further training in how to construct our own water filter. I was so happy to see that these people were willing to share such a wonderful gift like this with us, without cost.

“The whole filter construction process was amazing. It felt good to be building a filter for a family like mine, to bring clean water to them.”

Harriette’s filter and her knowledge has benefited more than just her family. “When I finished the training and learnt all these good things, I told my friends and neighbours about what I had learned and 7 of them signed up to do the training! There is a woman in the community who has started a business collecting water for families, she brings the water here and filters it for them.

“My hope is that there will be no more sickness here. I’m happy that there are families who will be getting their own filters and will be able to provide clean water for their children” 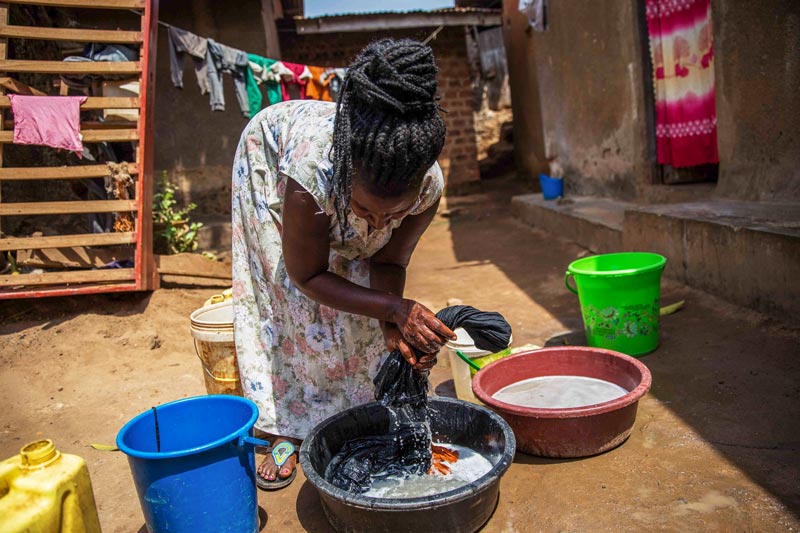 Joanne lives in a slum in Nakulabye with her elderly parents and her children. There is limited space for all of them. She gets just 80 pence a day renting out some small rooms in the community.

"Life is hard here and it's worrying," she explains. "The biggest challenge we have here is water." Her family collect water from an unprotected spring well.

"The water is very bad, very dirty, our children play in this water. They often drink directly from the spring well when they are thirsty; they don't understand the dangers. We have a lot of cases of typhoid and diarrhoea among our children."

She then gestures over to the sewage ditch which follows the road close to this only water source. “It gets worse when it rains. During the rainy season people empty their latrines into the drainage ditch and it flows through the community. It’s really dangerous.”

"We use water for everything - bathing, cooking, washing and drinking. We use between 100-200 litres a day. We boil the water to make it safe, but it takes such a long time…it can take up to 5 hours to boil it. We boil 10 litres a day for drinking but have to allow time for it to cool first. We spend 2,000 Ugandan shillings (40 pence, half of Joanne’s daily wage) on charcoal to do this. We often don’t have enough money to buy charcoal for both cooking food and boiling water. When the boiled water runs out, we are forced to drink the dirty water.

The result is that her children get sick. "I buy medication for them but the tablets just reduce the symptoms, they don't really heal them. When their illness has been really bad, my children have been admitted to hospital. During those times I can't do anything but take care of my child. I can’t work, everything stops." Joanne points to herself, "When I am sick no one gets looked after. Typhoid weakens you so much you can do nothing for yourself."

Joanne gets to her feet and checks on the bubbling cooking pot beside her. “If there is an opportunity to make our water safe we would be very grateful. We can then have clean water readily available for the whole community. I hope that my community will have improved health and reduced cases of illness. A clean community where all these children can go to school” 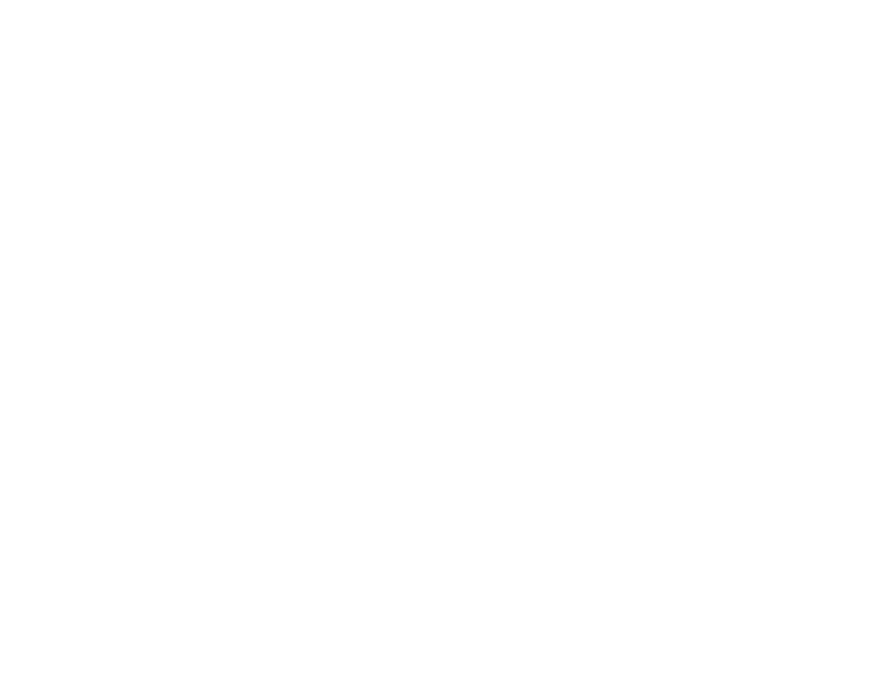 When we tell Fanu Tafer she owns one of the oldest BioSand Water Filters in all of Africa, the news prompts a satisfied smile.

Rather than talk about her filter’s longevity (20+ years) and low-cost durability, Fanu would rather talk about its profoundly beneficial impact on her family’s health.

The Ethiopian woman says before they received a BioSand Filter from Samaritan’s Purse in 1999, they suffered monthly from typhoid fever or other diarrhoeal diseases caused by unsafe drinking water. 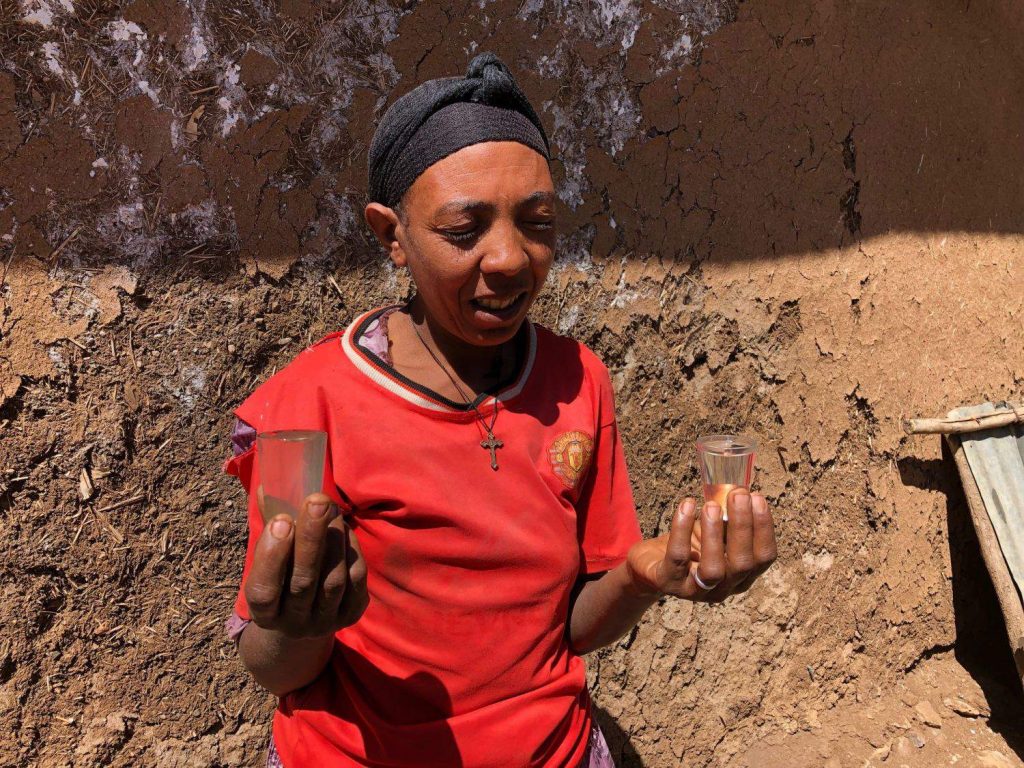 Fanu Tafer holding glasses of water: before and after being filtered.

Before the filter Fanu’s family suffered monthly from illness

“I was at the point of death one time,” Fanu recalls. She had to be rushed to the nearest hospital.
There was another frightening incident when her husband was so weak with diarrhoea that he collapsed while tending the family’s corn crop. Neighbours carried him home.

“The water from it is so safe. It’s the way I grew up. It raised me.” —Frealem Eshetu

Fanu, now 40, was often fearful that one or more of her three children would die from the water they gathered at a nearby lake. Each new round of diarrhoea forced the children to miss valuable school time.

But then Samaritan’s Purse arrived in her community. Funded by generous supporters like you, we offered to build concrete filters for as many households as possible. Fanu accepted our offer, and in the years since her family received their filter, “we have never experienced diseases from the water,” she says. 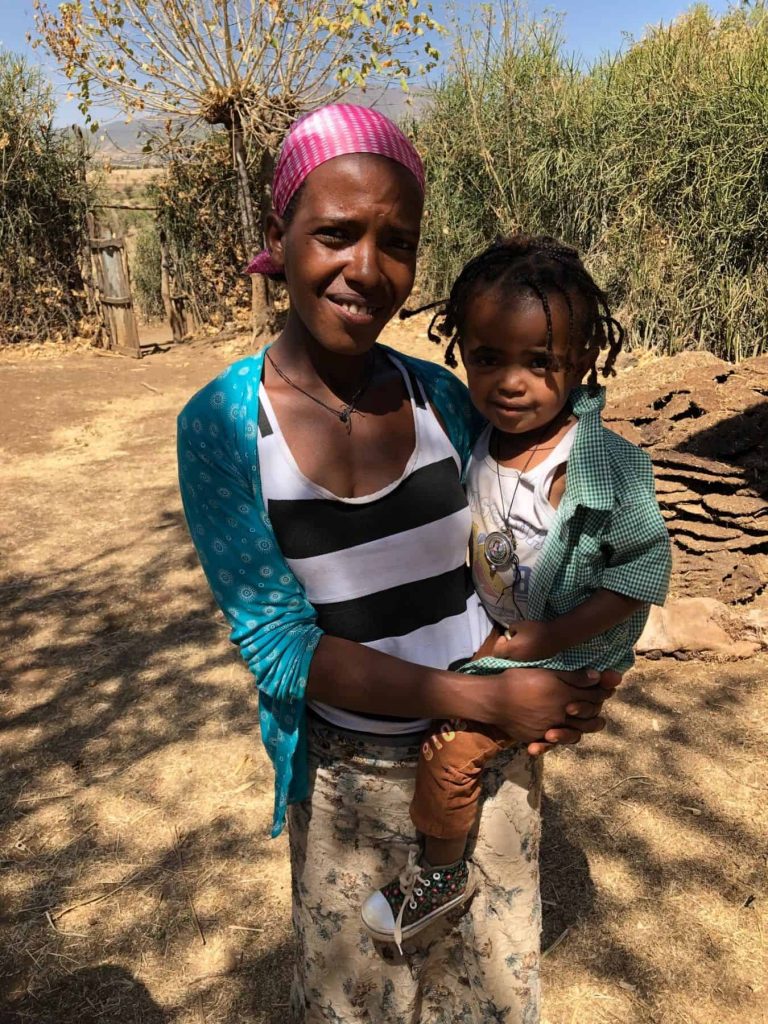 Frealem Eshetu holds her young daughter, the third generation in her family to benefit from the same 20-year-old BioSand Filter.

Many of the families in Fanu’s region—about a 90-minute drive from Ethiopia’s capital city of Addis Ababa—now get water from a nearby pipeline. She and her family don’t live close enough to the line, so they still fill and carry plastic jerry cans with water from the lake where cattle drink and defecate.

Fanu says even if they could receive water from the pipeline, she would still pour it through the layers of purifying sand and gravel inside her filter. “Until I die, I will not stop using it,” she insists.

Her married daughter, Frealem Eshetu, has an equally strong attachment to the modest-looking concrete box. She tell us: “The water from it is so safe. It’s the way I grew up. It raised me.”

“I won’t drink water if it hasn’t been filtered”

Frealem’s brother Zerihtin was too young to remember the sickness his family experienced before getting their BioSand Filter. But he remembers getting sick from drinking water at other people’s homes with no filter: “I have that fear (of getting sick again) so I won’t drink water if it hasn’t been filtered.”

Zerihtin adds: “I am very grateful for our filter but I know many other people all over Ethiopia and in other countries still need them. And so I wish they could have them too.”

Before we leave Fanu’s home, we pray that God will grant her family more good health. They, in turn, promise to pray that Samaritan’s Purse will have the resources to continue building BioSand Filters in many parts of the world where they’re needed just as desperately as Fanu’s family needed one.

How is safe water possible so cheaply?

When Dr. David Manz invented BioSand Water Filters in 1994, he offered the technology to non-profit groups to help in the developing world.

Samaritan’s Purse accepted David’s offer because we knew that someone—often a child—is dying every minute* from diarrhoeal diseases caused by poor water quality and hygiene.

We tested the filter technology, confirmed it could turn dirty water into safe water in minutes, then arranged for the construction of 12 steel moulds from which concrete filters could be formed. We sent the moulds to several countries where we and our local Christian partners began building filters. One of the first countries was Ethiopia, where we’ve now built 32,000 filters.

Thanks be to God and to donors like you, worldwide we have built enough household BioSand Filters and larger scale Samaritan Filters for schools and small communities to help almost 1.7 million people. However, for many, their need remains urgent and critical.

Around 11% of the global population, over 800 million people** still lack access to safe clean water. Clean water for a family can cost less than 1p a day.

Will you help a family like Fanu’s receive the precious gift of life-saving clean water?

Thank You for your prayers and support. 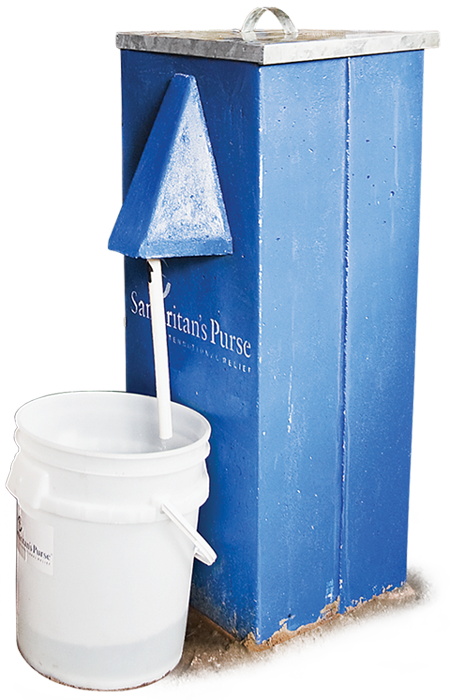 HOW THE BIOSAND WATER FILTER WORKS

Dirty water is poured into the top.

The dirty water is first filtered through a biological layer that traps organic material, parasites, microorganisms and viruses.

The water then flows through several layers of sand and gravel, trapping any remaining bacteria.

Clean water is forced out of the spout every time dirty water is poured through the top. Each filter can produce approx. 40 litres of safe water an hour.

Filters can last for decades as there are no moving parts, no power supply is needed and they are made of concrete. 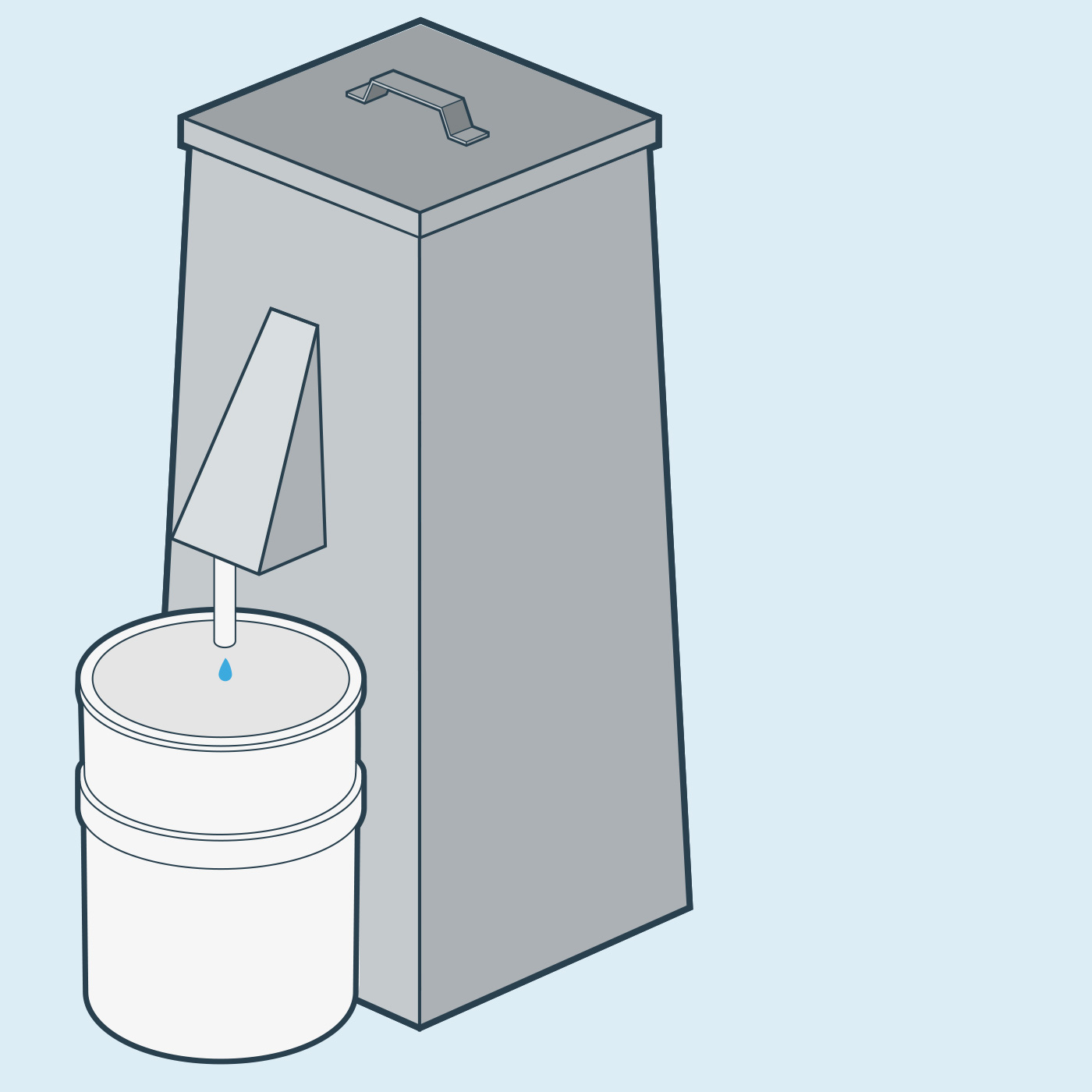 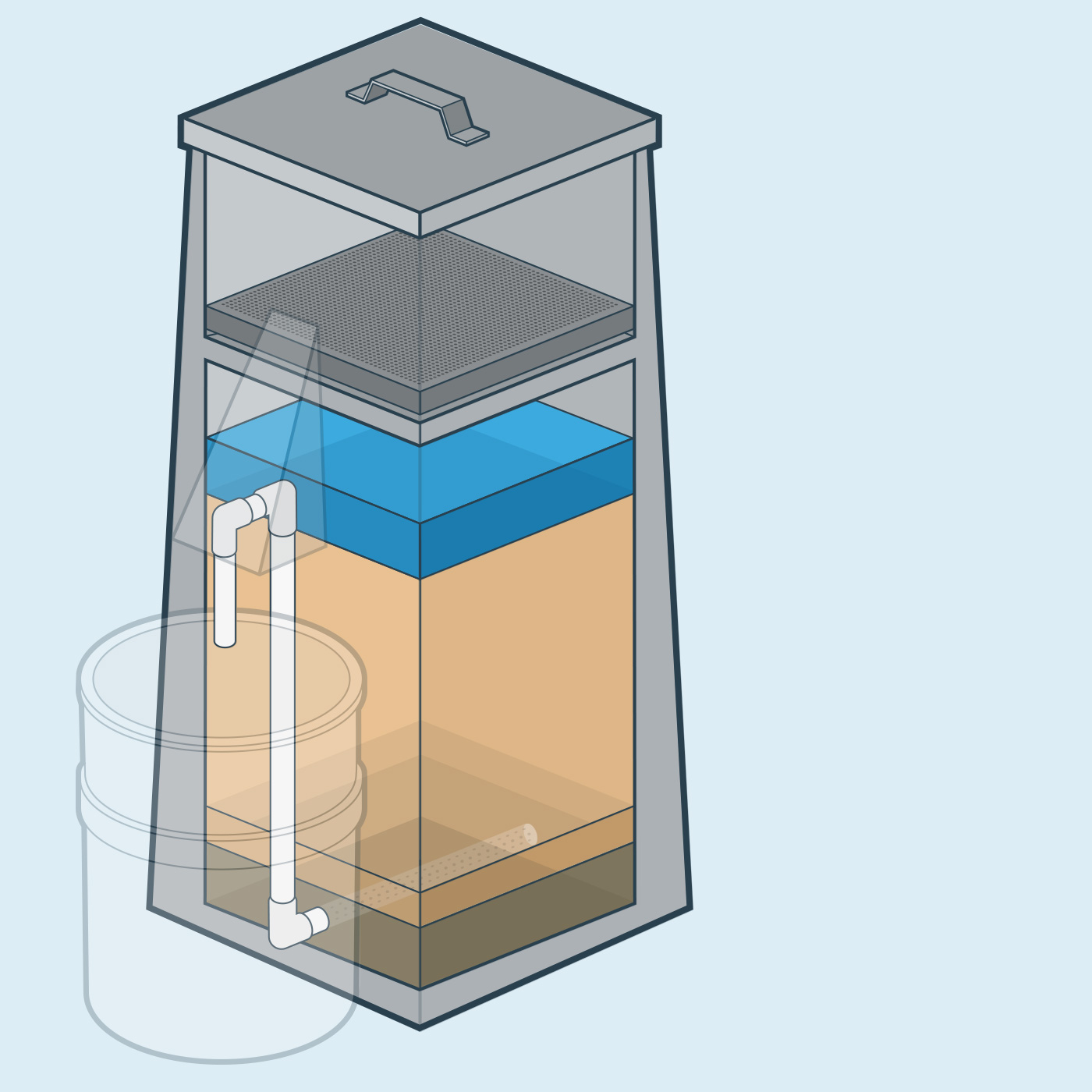 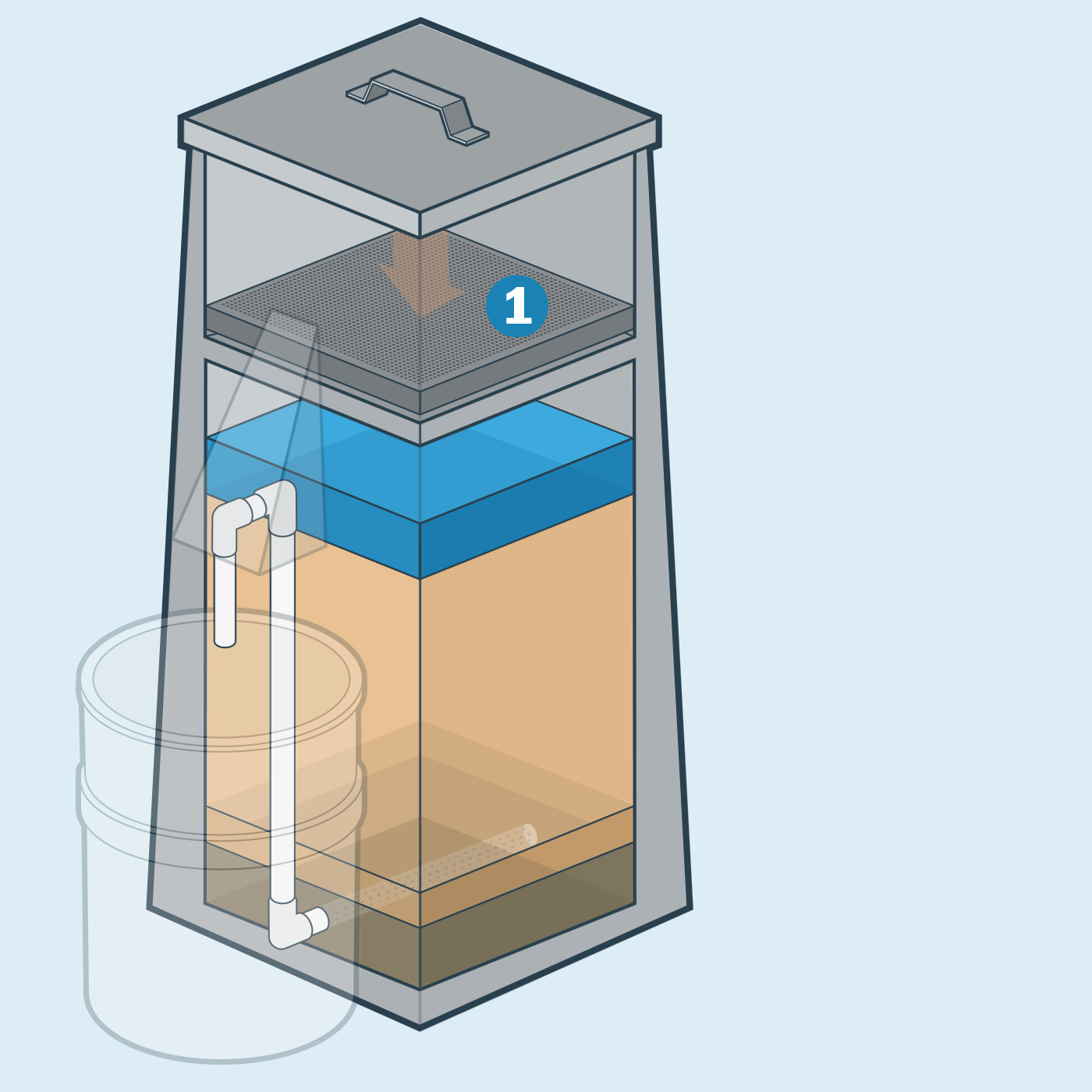 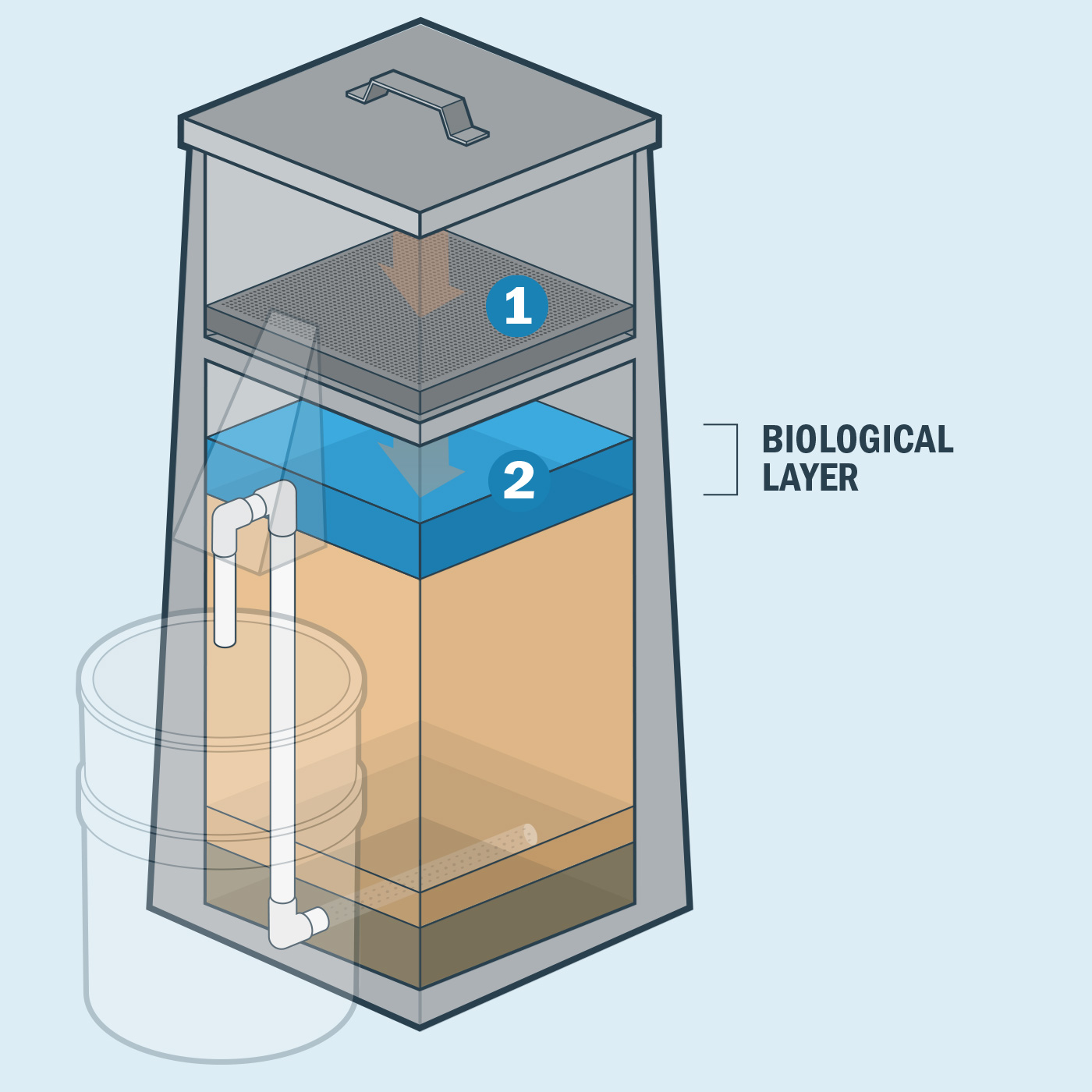 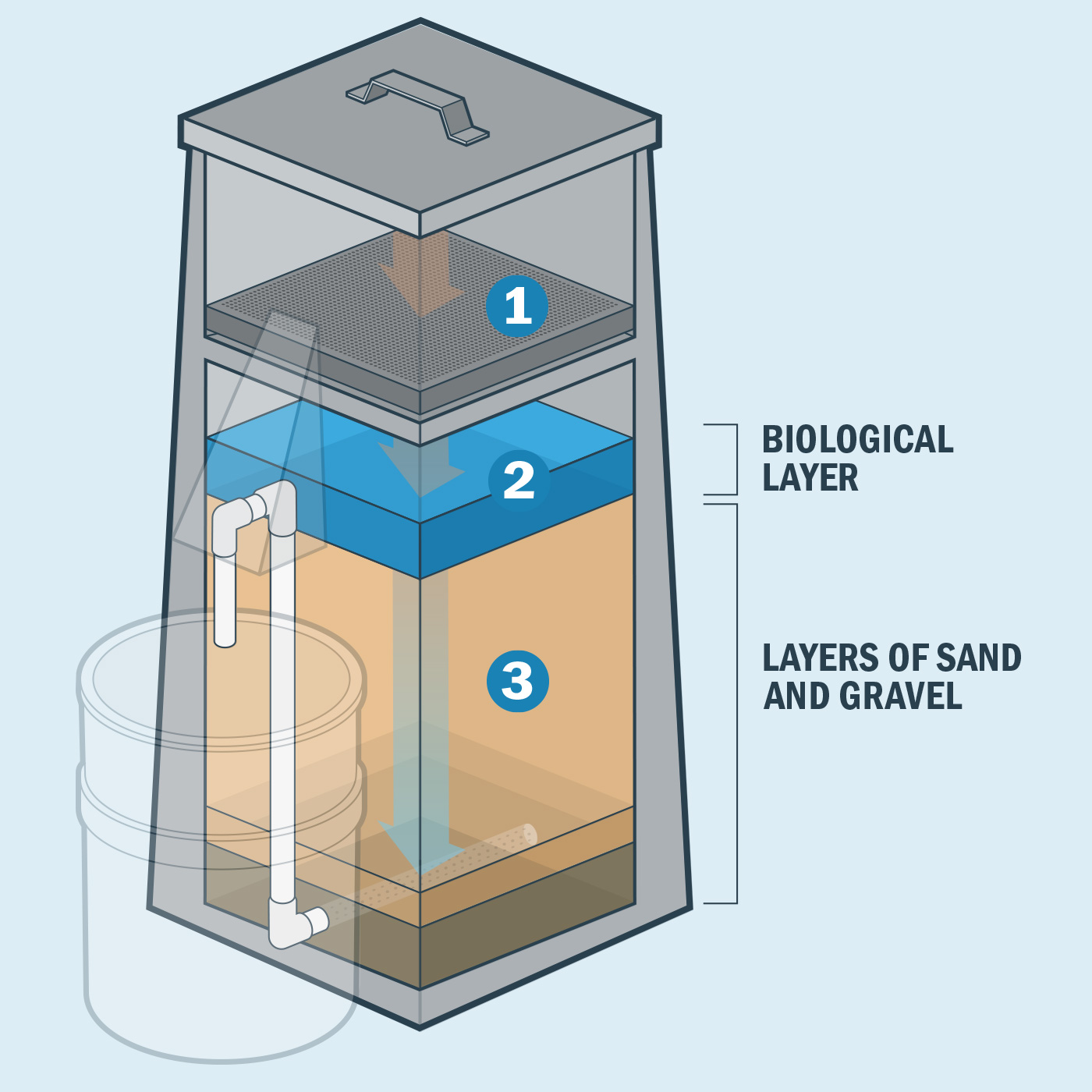 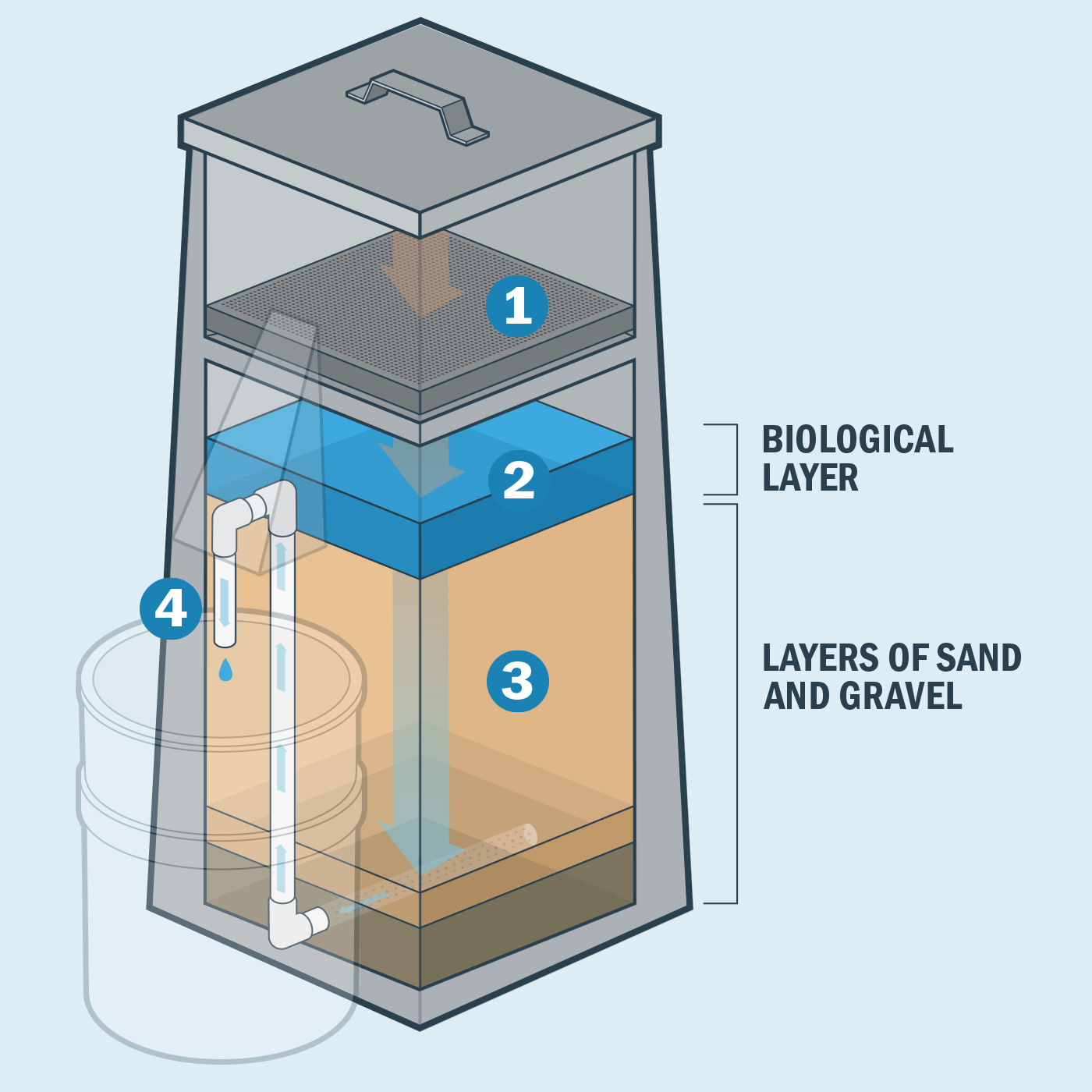 Life-Saving clean water for less than 1p a day

Will you help those who are in constant danger of waterborne diseases?

"I WAS THIRSTY AND YOU GAVE ME SOMETHING TO DRINK"